‘Having a vagina doesn’t make me less of a man’: Transgender man reveals he put his smear test off for a year for fear he’d be turned away because of his ‘bound chest and hairy legs’

A transgender man has come forward to talk about his experience of having a smear test post transition.

Freelance writer William Cuthbert from Brigg, Lincolnshire admitted he was ‘nervous’ about health professionals when he wrote for Metro, as he was overdue his smear test by a year by the time he called to book the appointment.

He revealed he knew he was overdue the screening, but every time he tried to book the appointment he was overwhelmed by anxiety that his ‘bound chest and hairy legs’ would raise questions with health professionals who might not believe he was eligible. 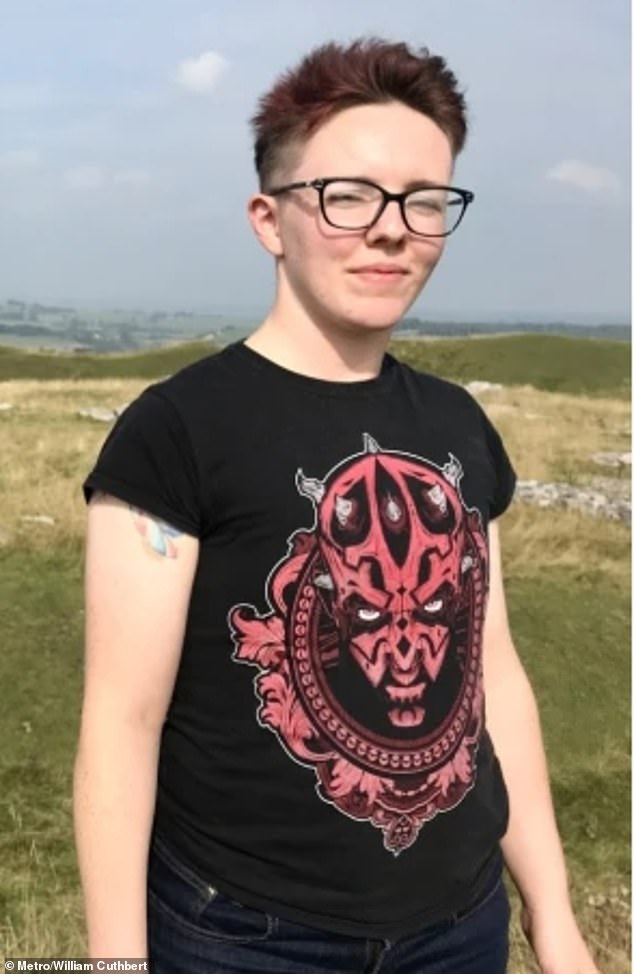 William Cuthbert (pictured) from Brigg in Lincolnshire, has opened up about his fears when booking a smear test following his transition – but thankfully he revealed his test results were clear

Although he admitted he had always found smear tests uncomfortable even before his transition, he worried about stripping naked from the waist down now that he had come out as a man, which he feared would make him feel ’emotionally naked’ as well.

He said: ‘What if medical professionals don’t know I’m a trans man? Will I be misgendered? How would I react to that?’

William added: ‘Having a vagina doesn’t make me less of a man.’

William stressed that not everyone who has a cervix is a woman, which he said was an ‘important’ distinction.

After mustering up the courage to book a smear test, William braced himself to attend the screening.

When he arrived, he was confronted by one of his biggest worries as the nurse told him the surgery ‘screened women’ for HPV as part of the NHS cervical screening programme.

This terminology is common when heading for a smear test, although the NHS website now uses ‘people with a cervix’ instead of ‘women’.

William considered telling the nurse he was trans before deciding not to say anything. He recalled feeling like challenging one nurse would not make a difference.

DO YOUR GENES DETERMINE IF YOU ARE TRANSGENDER?

Scientists recently uncovered 20 genes linked to being transgender – supporting claims that the condition has a physical basis.

Researchers from Vanderbilt University Medical Center, George Washington University and Boston Children’s Hospital believe the gene variations may contribute to people identifying with the opposite sex.

Critics of transgender identity say the condition is ‘all in the mind’, and transgender people have a psychological problem rather than a medical one.

But by highlighting genetic mutations that affect brain development, the latest findings point towards transgender identity having a physical basis.

Presenting their research at the Society for Reproductive Investigation conference, the researchers said: ‘We identified genetic variants in 20 genes that may play a role in transgender identity.

‘The most promising of these include variants of genes involved in neurologic development and sex hormones.’

Dr Ricki Lewis, a geneticist, said: ‘These are highly reputable folks going about this exactly the right way, searching the genomes of transgender people to highlight which genes they have variants in. It lends legitimacy, if that needs to be added, that transgender is not a choice but a way of being.’

However he later admitted he ‘reconsidered his silence’ arguing it was important to speak up in order to challenge the belief that everyone who goes for a smear test or an abortion is a woman.

Since the appointment, William has expressed regret over not speaking up – and has wondered if he could have changed one person’s mind that day.

He admitted that the nurse did not specifically refer to his gender, suggesting she suspected he was a trans man – or perhaps suggesting she had not ‘looked as closely’ at him as he had feared before booking the examination.

Thankfully, William said the smear went smoothly and his results came back clear.

‘I wish I had gone earlier.’ he admitted.

In everyday life William goes by he/they pronouns and on his Twitter page describes himself as a ‘trans witch’.

GPs are trying to improve take-up rates as figures show up to half of women under 50 in some areas have not had a cervical screening in the recommended time frame.

A total of 220,000 British women are diagnosed with cervical abnormalities each year, and since declining health services post-pandemic many people aren’t booking their smear tests despite rigorous campaigning from the NHS.

In 2020, a Public Health England informational leaflet for smear tests caused outrage among women’s rights groups after it failed to mention the word ‘women’ in a section detailing who is eligible for the screening.

The Sunday Times reported an early edition of the leaflet said: ‘If you are a transgender (trans) man registered with your GP as a female, we will send you invitations for cervical screening.

‘If you are registered as male you will not receive invitations, but your GP or practice nurse can arrange an appointment for you if you have a cervix. If you are a trans woman you do not need a cervical screening.’

It was later revised to read: ‘Cervical screening is for women and people with a cervix.’ Public Health England has since been dissolved and UK Health Security Agency and Office for Health Improvement and Disparities

Despite the amendment, Nicola Williams, director of the Fair Play for Women campaign group, claimed the newer version may still create confusion as ‘women who don’t speak English as a first language may not know what “people with a cervix” means.’