She's got some WICKED pipes

Looks like Gracie McGraw was blessed with the same killer vocals as her parents Tim McGraw and Faith Hill.

Entertaining fans on her Instagram page as part of her “Showtunes Sunday” segment, the daughter of country superstars showed off her sweet pipes by singing “I’m Not That Girl” from the hit musical “Wicked.”

Dressed in an oversized sweater, Gracie belted out the ballad originally performed by Idina Menzel when she played the role of Elphaba in the original Broadway show back in 2003.

“S**ts sad y’all,” she captioned the clip. “Hit me in the feels. Been there. Relate. Wicked will always remain the top 5.”

Celebrity friends and fans took to the comments to praise the young singer for her performance. Actress and musician Rita Wilson wrote, “Well this is gorgeous.”

Gracie has previously paid tribute to the legendary musical as a part of “Showtunes Sunday.” Back in 2020, the 25-year-old shared a jaw-dropping performance of “The Wizard and I.”

She began her caption, “Just want to start off by saying YES, I know these aren’t the best vocal videos out there but Broadway makes me very happy and I hope to be there one day. This is practice for me. The only way to get better is to do it multiple times honey!!”

Gracie admitted that playing Elphaba on Broadway would be a “dream role” and said that she had gone to see the play at least eight times. 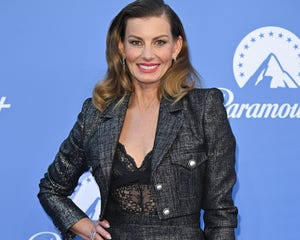 Faith Hill Didn't Shave Her Armpits for 1883, Fell Into Depression After Filming

“I was pleased when wicked was requested many times,” she continued. “I got really excited with this one because this is the healthiest my voice has sounded while singing this song TO DATE.”

Gracie is the eldest child of Tim and Faith, the couple also share Maggie, 23, and Audrey, 20.

Back in May 2021, Faith highlighted her daughter’s musical prowess when paying tribute to Gracie on her birthday,

“Truth is…I really wanted to post you singing Celine Dion’s “All By Myself” where you freaking NAIL that crazy ass high note that blew my mind,” she wrote on Instagram. “Not once but multiple times. I’ll save that for another time.”

She added, “We cannot wait to see what you do. It is going to be insane. The most important thing… is that you will always be YOU!!!! And that is something full grown adults have a hard time achieving.”