On his popular YouTube channel, MindYourDecisions, mathematician Presh Talwalkar frequently digs up samples of classic college entrance exams so his followers can see how they’d fare in the days before standardized testing.

Case in point: In one of his most recent videos, Talwalkar unearthed a question from an 1876 algebra exam given to applicants at the Massachusetts Institute of Technology. It’s a simple prompt:

As Talwalker goes on to explain, the solution is a relatively simple one, represented by the equation f-2 = 3 (s-2), if “f” and “s” represent the father and son’s ages, respectively. 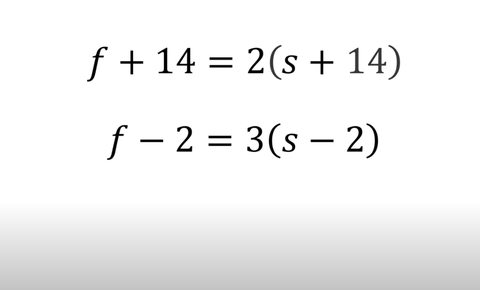 Now for the second part: If the father will only be twice as old as his son in fourteen years, their ages at that time can be represented by the equation f+14 = 2(s+14), with f and s once again standing in for the father and son. “We now have a system of two equations and two variables,” Talwalkar says.

After some simple distribution, which you can watch above, Talwalker subtracts the second equation from the first, revealing the son’s age as 18 and the father’s age as 50. And if you’re up for another challenge, see if you have what it takes to solve this viral Amazon ‘hanging cable’ problem.

01/12/2021 Lifestyle Comments Off on This Math Puzzle Stumped MIT Applicants on the 1876 Entrance Exam
Recent Posts
We and our partners use cookies on this site to improve our service, perform analytics, personalize advertising, measure advertising performance, and remember website preferences.Ok