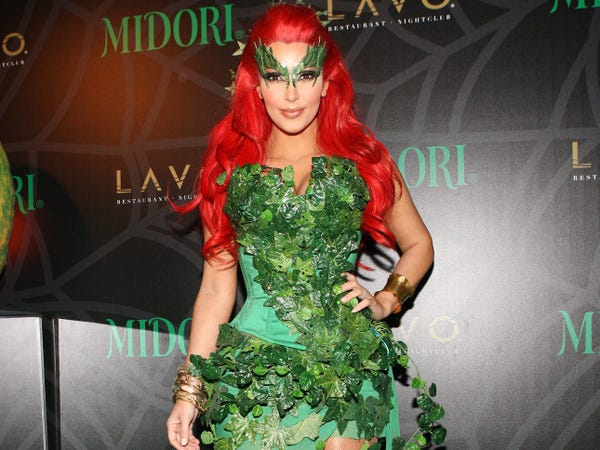 Few people celebrate Halloween the way the Kardashian-Jenner family does.

Over the years, Kim Kardashian West, Kylie Jenner, and their sisters have rocked some pretty wild looks on October 31. The KKW Beauty founder has dressed as everything from Poison Ivy to a giant bug, while the Kylie Cosmetics CEO has opted for daring costumes inspired by Christina Aguilera and her daughter Stormi.

From Khloe Kardashian's Cruella de Vil look to Kendall Jenner's take on the Powerpuff Girls, here's a look at some of their wildest costumes. 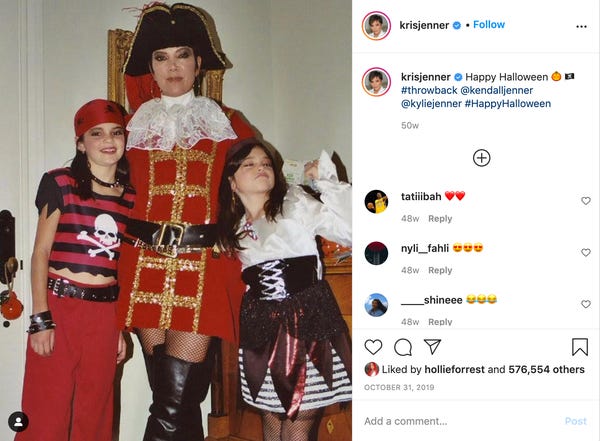 While young Kylie and Kendall look adorable in their costumes, it's wild to see Kris dressed as a pirate. She donned a red-and-gold dress with a white lace collar, black thigh-high boots, and a classic pirate hat.

Cat costumes can be overdone, but Kim Kardashian West made her outfit stand out in 2010. 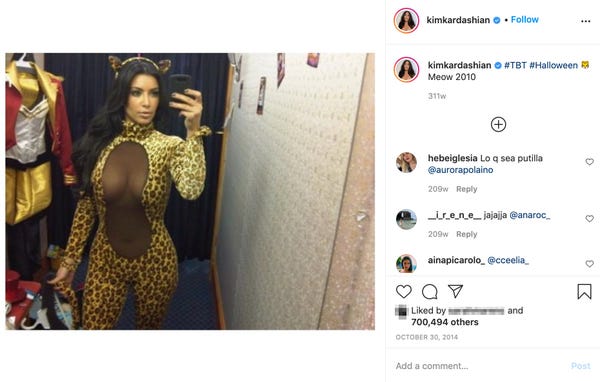 In a mirror selfie taken that year, Kardashian West is seen wearing a cheetah-print catsuit with long sleeves and a turtleneck top. The bodice of her suit was especially unique, as it was semi-sheer, made from mesh, and extended from her chest to beneath her belly button.

To complete the look, Kardashian West wore a matching set of cat ears.

The KKW Beauty founder was almost unrecognizable during a Halloween party in 2011. 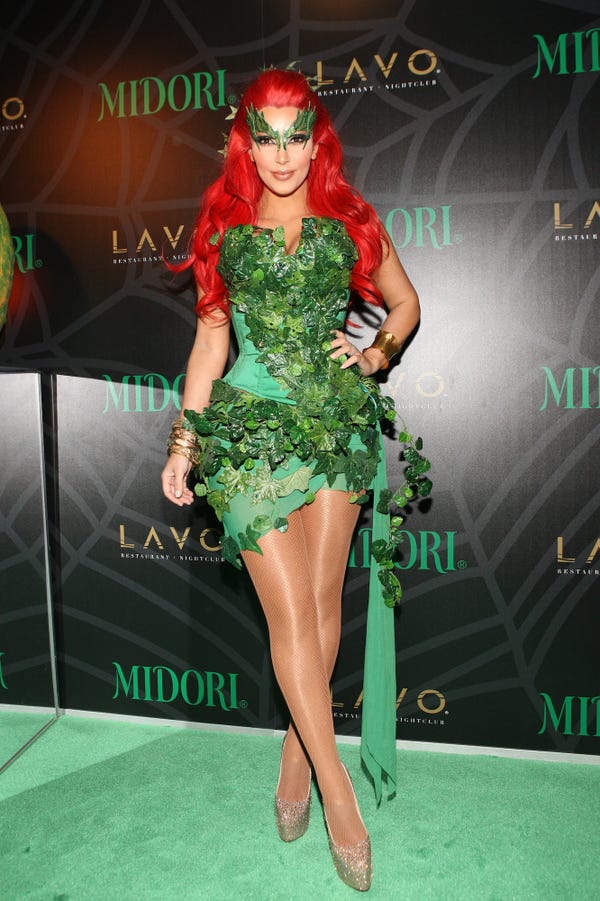 The following year, Kardashian West attended the same event as a blonde mermaid. 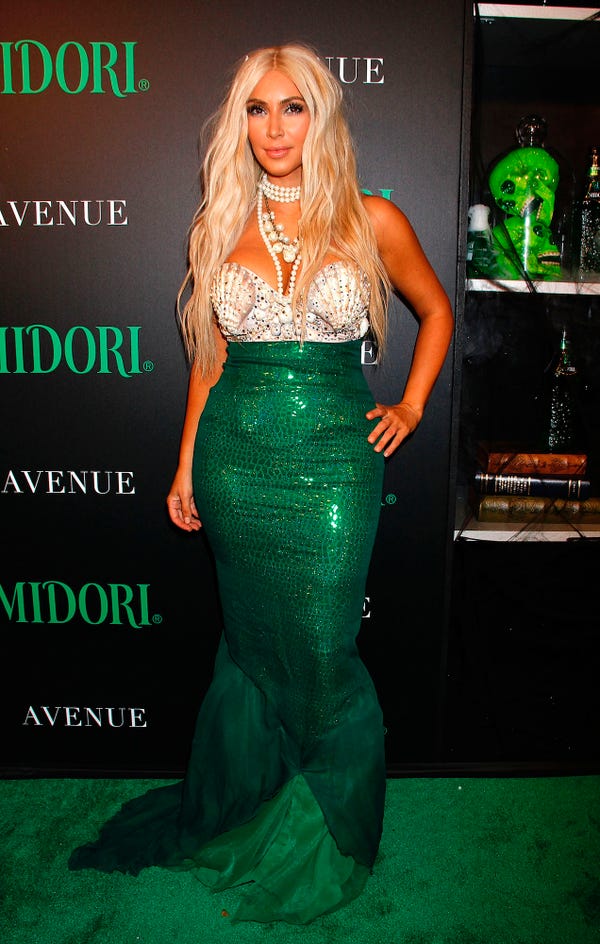 Her dress featured a white strapless top covered in real shells, as well as a floor-length skirt that perfectly blended in with the event's green carpet. Kardashian West completed the look with blonde hair and layers of necklaces.

Three years later, she poked fun at one of her controversial Met Gala looks. In 2013, Kardashian West attended the Met Gala in a floral maternity gown designed by Givenchy. During the event, some people shared hurtful memes that compared the garment to a couch, which later made the reality star cry.

Two years later, however, Kardashian West responded to the criticism by wearing the dress again on Halloween. She shared a photo of the occasion and wrote: "I think I nailed the Kim K costume! 🕸👻🕷." She also said in another post that the dress "still fits…"

Kylie Jenner wore one of her best — and wildest — Halloween costumes in 2016. Khloe Kardashian, on the other hand, could have starred in a Marvel movie with her costume that year. 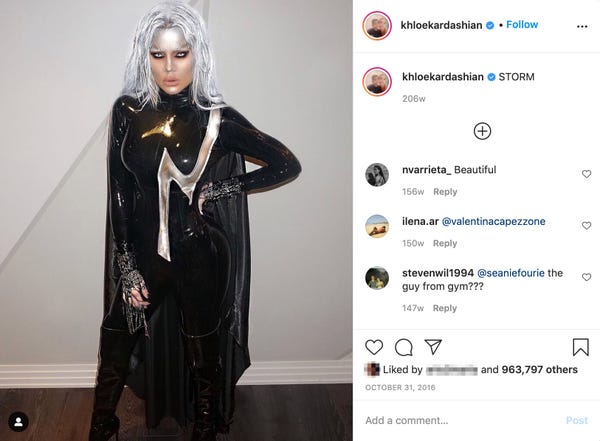 Dressing as the superhero Storm, Khloe donned a shiny bodysuit with a cape, knee-high boots, and chain-style gloves. It was her makeup and hair, however, that stole the show.

Her silver hair perfectly matched the sparkling makeup that covered her forehead, leading to her bright white eyes — which she achieved with contact lenses.

Also in 2016, Kourtney Kardashian opted for an unexpectedly dark costume. 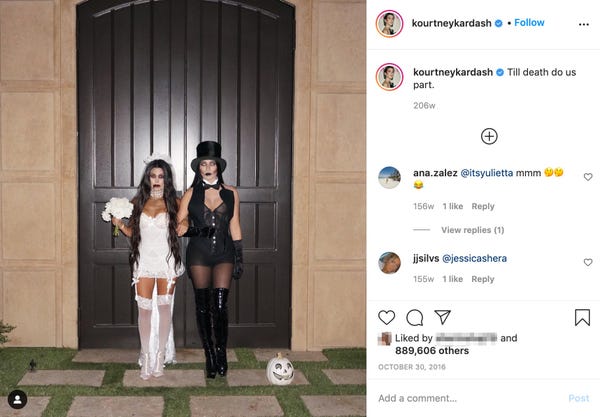 Till death do us part.

Not only did she wear white lingerie and silver heels for the dead-bride look, but Kourtney also donned a veil, crystal choker, and face makeup that made it look as though her mouth was bleeding.

Khloe Kardashian embraced the "Game of Thrones" hype on Halloween in 2017. 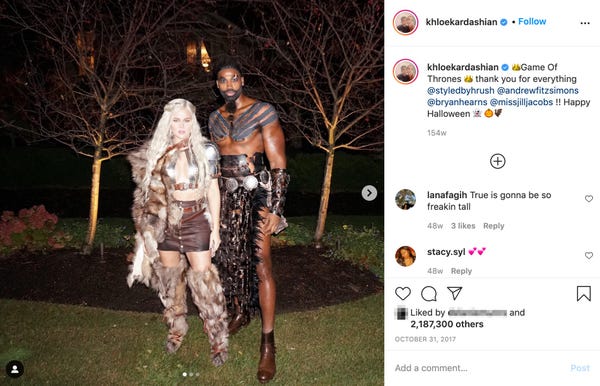 The couples costume, which she wore with Tristan Thompson, transformed the duo into Daenerys Targaryen and Khal Drogo from the hit series.

Khloe's outfit was an especially wild take on the character, as it included a brown miniskirt and an armor-inspired top with a square cutout across her chest.

Kendall Jenner also put her own twist on a fan-favorite character that year. 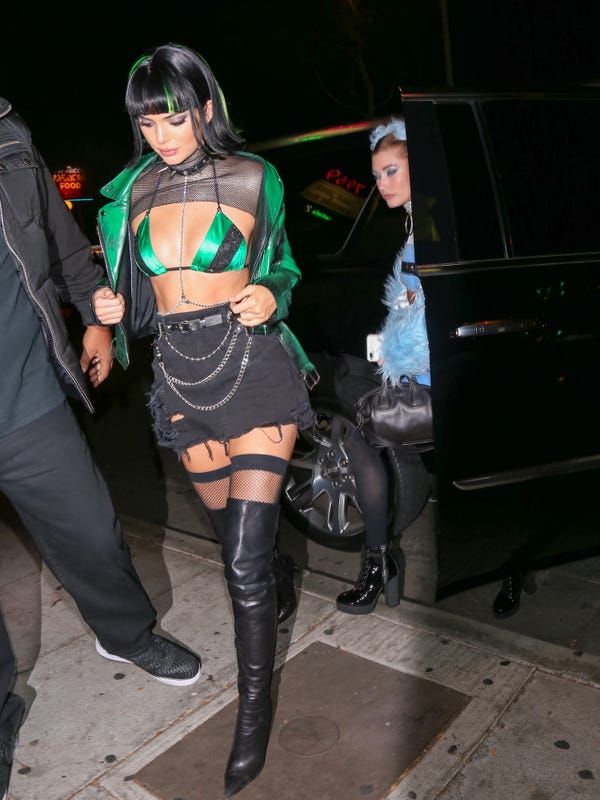 Hailey Bieber (née Baldwin) was also in attendance and was dressed as Bubbles from the cartoon series.

The model outdid herself when she wore a wild "Austin Powers"-inspired costume in 2018. 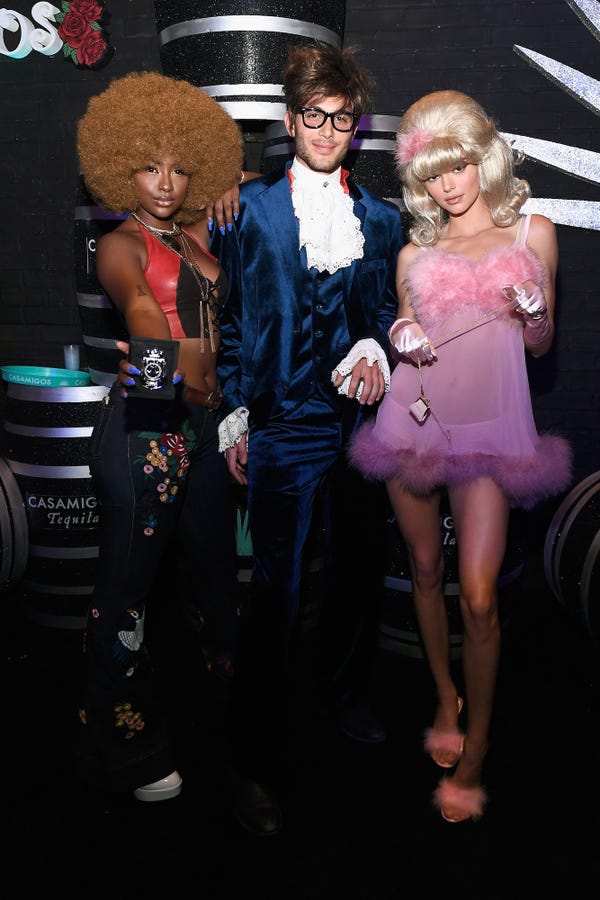 She dressed as a fembot from the series' first film with a blonde wig, pink gloves, sheer baby-doll dress, and feather-embellished heels.

Kourtney Kardashian took inspiration from another celebrity that year. 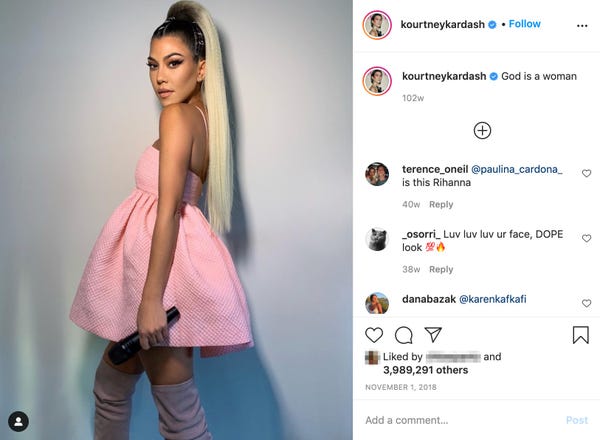 God is a woman

With her pink baby-doll dress, high ponytail, and thigh-high boots, Kourtney could have been mistaken for Ariana Grande. To make her costume even more realistic, she also carried a microphone.

On Instagram, Kourtney shared a photo of the outfit and wrote "God is a woman," referencing the musician's 2018 hit.

Kylie Jenner wore one of her most whimsical costumes to date in 2018. 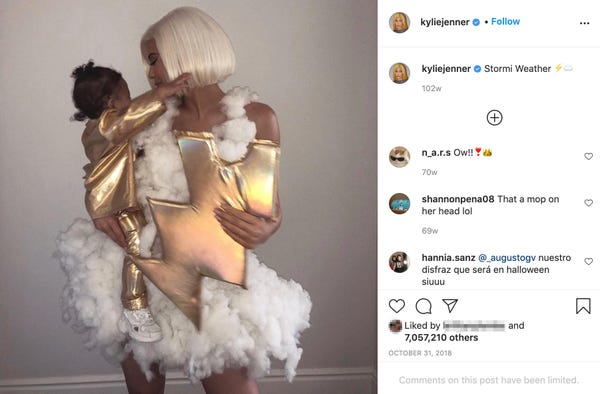 While holding her daughter Stormi, Kylie wore a minidress made from a fluffy material that looked like clouds. She also wore a white wig and carried a gold lightning bolt that matched her daughter's outfit.

All of the Kardashian-Jenner sisters dressed in daring Victoria's Secret Angel costumes that year. 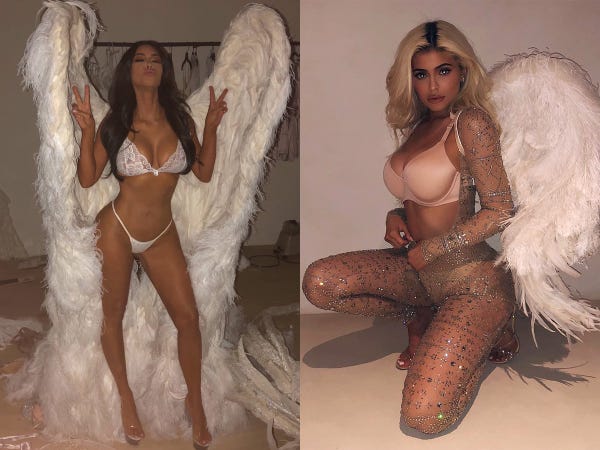 As Insider previously reported, their costumes were loaned to them by Victoria's Secret. Kardashian West wore a white lingerie set with giant Angel wings, and Kylie donned a crystal-covered bodysuit with a nude bra, heels, and smaller wings.

The Daily Mail previously shared a full look of the outfits used in the photo shoot — which also included Kendall, Kourtney, and Khloe — by photographer Marcus Hyde.

Kylie opted for a daring fairy costume the following year. 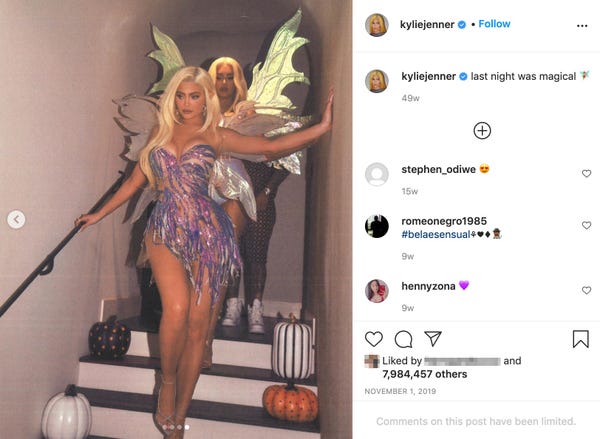 In addition to fairy wings and a long blonde wig, Kylie also wore an asymmetrical, strapless dress that was see-through with sparkling purple details. She also donned strappy sandals and prosthetic pointed ears.

One of the Kardashian West family's many costumes in 2019 was inspired by bugs. 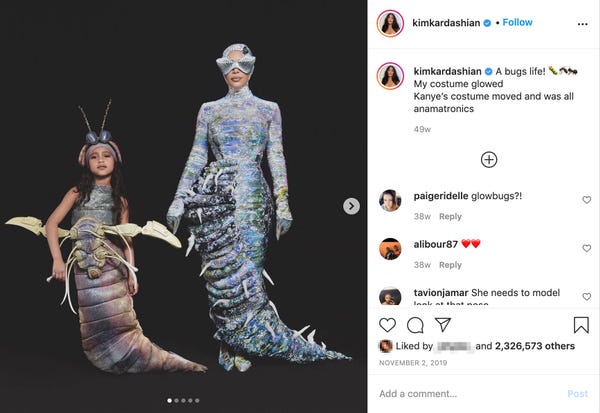 A bugs life! 🐛🦟🐜 My costume glowed Kanye’s costume moved and was all anamatronics

Kardashian West got her whole family in on the costume. On Instagram, she shared photos of their outfits and said: "A bugs life! 🐛🦟🐜 My costume glowed; Kanye's costume moved and was all animatronics."

Khloe, on the other hand, put a wild twist on a classic Disney villain. 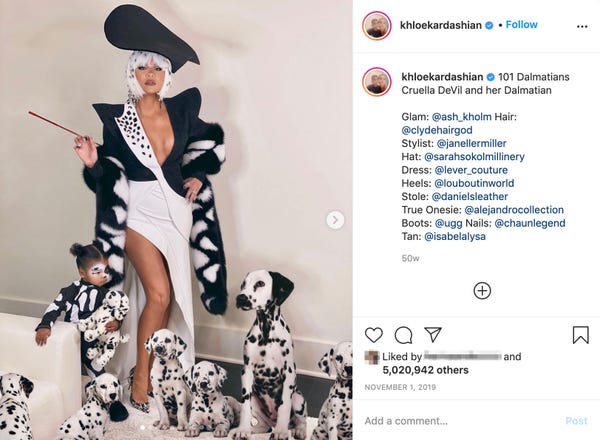 Rather than wearing Cruella de Vil's fur coat, Khloe donned a black-and-white dress with giant shoulder pads, a plunging neckline, and a thigh-high slit. She also dressed her daughter True in a Dalmatian costume and edited dogs into her Instagram photo.

10/17/2020 Lifestyle Comments Off on The wildest Halloween costumes the Kardashian-Jenner family has worn throughout the years
Recent Posts
We and our partners use cookies on this site to improve our service, perform analytics, personalize advertising, measure advertising performance, and remember website preferences.Ok