A group of women are getting ready to go out. They’re checking their makeup, doing their hair, sewing a quick repair on a dress.

It’s a scene familiar and different. The dresses sit somewhere between Japanese tradition and Western avant garde, kimonos evolving into inter-war eveningwear. The work employed the ground pigments and silk that Japanese artists had used for centuries, but it used them to paint high heels, a hair curler and a makeup compact. 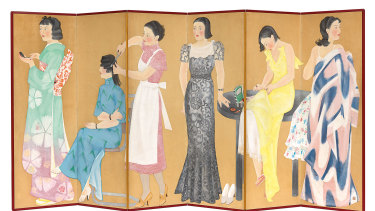 And the life of the artist, too, was a journey walked between ancient and modern, a battle between expectation and experiment.

For decades Taniguchi Fumie, her work, and even her era, were virtually lost to posterity. Now this screen, discovered last year in a private collection in Hawaii and purchased by the National Gallery of Victoria, is the “hero” piece of a new exhibition at the NGV International focusing on Japanese modernism, a reflection of the wave of cultural change that swept through Japan a century ago in an energetic pocket of time before the second world war.

“Traditionalists would have seen this work as challenging them,” says NGV senior curator of Asian Art, Wayne Crothers. “It was the avant garde. They would have seen it as a threat.”

The establishment had coined a belittling phrase to describe women like Fumie: “Moga”, short for “modern girl”. They were the first generation of empowered, financially independent (though still low-paid) women. They bought clothes, they read magazines, they went to the cinema, and they transformed consumer society around them, along with their “Mobo” – “modern boy” partners.

Aged just 25, in kiss-curled hair and modernised kimono, Taniguchi was one of the first female artists to compete in the men’s art domain, and she made quite an impact.

These screens in the 17th and 18th centuries would depict courtesans in the fashion and pastimes of the era. Now, as the title suggested, women were “preparing to go out”.

Annika Aitken, assistant curator of Asian Art, says the screen and the exhibition capture an important transitional moment in Japan, and in the modernisation of Asia.

“But it’s a history we don’t know much about,” she says.

Sadly, though, Fumie didn’t ride her early success to a lifelong career. She had a string of jealous or exploitative husbands, she found it hard to combine her work with motherhood, and the latter half of her life was lived in Los Angeles in obscurity, working as a seamstress, waitress and maid.

“She was really lost to history,” says Aitken.

Japanese Modernism is a free exhibition at NGV International from February 28 to October 4.

Related posts:
02/14/2020 Lifestyle Comments Off on The ‘Moga’ who led a revolution in Japanese art, then vanished
Recent Posts
We and our partners use cookies on this site to improve our service, perform analytics, personalize advertising, measure advertising performance, and remember website preferences.Ok