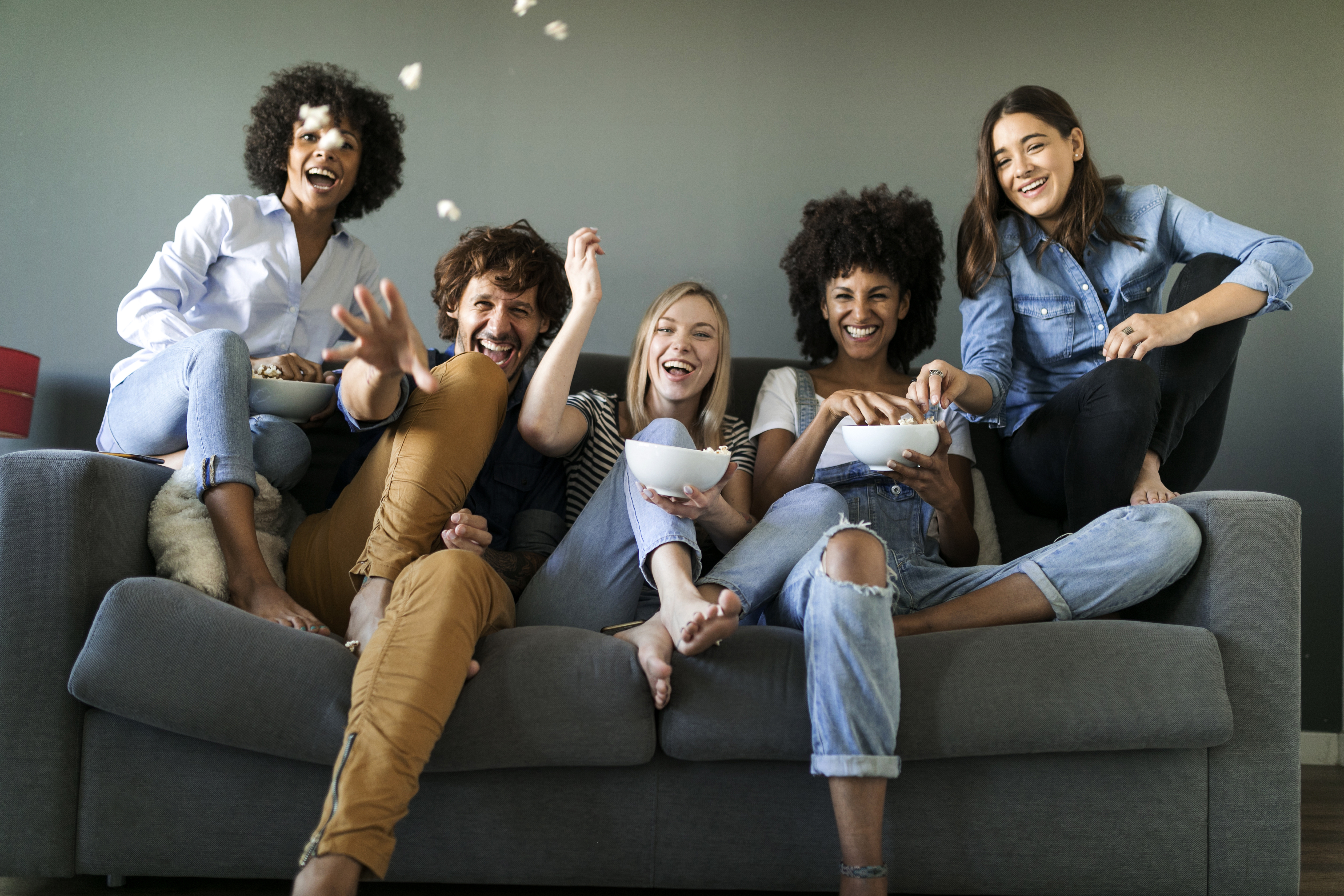 Online movies and virtual escape rooms and theatre in your living room… no, we haven’t gone back to the bad old days of lockdown but the cost of living crisis is forcing many households, once again, to take up at-home leisure activities.

Figures from Barclaycard show that six in ten of us are limiting our number of nights out, and just under half are cutting down on drinking in pubs and bars. Meanwhile, we are spending more on what Barclays calls ‘insperiences’ – those leisure activities that we can enjoy at home.

Spending on digital content and subscriptions, including games and sports streaming services, grew in September for the first time in eight months, while families also spent more on takeaways.

Esme Harwood, director at Barclaycard, says that although we are limiting our spending, we are still keen to have a good time while we save money, particularly when it comes to nights in.

‘The increase in spending on digital content and takeaways in September reflects this and could be a trend that continues into the festive period,’ she says. However, staying in as winter comes need not be dull.

Inside today’s Metro Money is your guide to some of the good-quality – and good-value – experiences you can have, all from the comfort of your sofa.

Londoners spend the most, but the average person in the UK spends £2,004 per year on takeaways,  and young people are the most likely to buy takeout food.

Creating your own ‘fakeaway’ versions of popular delivery meals can save you a packet, with the Spar research showing the top dishes to recreate for yourself are fried chicken, chow mein, spring rolls, chicken tikka masala  and Thai curry.

Try the Pinch Of Nom website for some popular fakeaway recipes, while Pizza Express offers its own recipes online so you can recreate the experience at home.

The cost of theatre tickets has rocketed, with figures in June showing West End prices up by a quarter since before the pandemic. However, you can still enjoy the streamed theatre offerings that were put on for lockdown, for a fraction of the cost of a theatre ticket.

The National Theatre is offering recent plays including The Book of Dust by Philip Pullman, and also Frankenstein, starring Benedict Cumberbatch and Naomie Harris, right, for just £7.99 each.

Free opera available at Opera Vision includes Opera North’s version of Orpheus, while English National Ballet offers ballet streaming on demand at for as little as £4.99.

Finally, if you’re a fan of filmed musicals, Hamilton is available on popular streaming site Disney+, while Everyone’s Talking About Jamie is on Amazon Prime.

We are all familiar with the streaming services that cost us money for films, but having them all can be pricey, so if you want to curl up with a movie it pays to pick your platform.

‘With so many different streaming services competing for our attention, and rising prices putting extra strain on our finances, it’s a good time to evaluate whether subscriptions to platforms like Amazon Prime and Netflix are worth the cost,’ says Brean Horne, personal finance expert at comparison website NerdWallet.

None of the streaming platforms has an exit fee, so it makes sense to alternate platforms so that you can spend your nights in watching movies from one and then another.

‘Remember that if you feel you aren’t getting value for money from your streaming subscription, you can cancel penalty-free whenever you want,’ says Nick Baker, TV and streaming expert at Uswitch.com comparison website.

You may also be able to switch to cheaper tiers on your existing services. For example, Netflix is about to launch a cheaper tier for those who are prepared to have adverts in their movies, which will cost £4.99 a month. Disney+ is also offering an ad-supported subscription.

Recent survey data from Barclaycard shows that many people are craving cheaper ‘at home’ experiences.

A quarter of us are opting to stay in with board games, and 19 per cent with video games, rather than go out.

You could try charity shops for cheap board games – check that they are complete before you part with your cash.

Or visit Facebook’s Board Game Exchange page to see if you can swap some of the games you’re tired of.

Meanwhile, instead of a pricey night out at an escape room, box sets such as the Exit The Game for around £14 can give you an entire night in solving themed puzzles. Beware buying these second-hand, though, as they often contain components that are destroyed as the game continues so you can only play them once.

Staying in saves plenty of pennies, but it is good to go out sometimes, too. When you do, try these discount tricks to get the best deals.

Kirsty McManus and her partner Marcus used to go big on nights out.

‘We were big fans of “out there” date nights before the world went to pot – BYOB pottery classes, quirky pop-up restaurants, but mostly escape rooms,’ says Kirsty, from Glasgow.

These days Kirsty, who runs football gifts business Scored It, takes advantage of the products that were launched during Covid to have cheaper nights in.

‘Covid saw loads of businesses launch at-home mystery games and date-night boxes,’ she says. ‘These used to be really expensive, but people got bored with them really quickly and are now putting them back online.

‘You can pick up a bundle of murder mystery games on eBay for a tenner.’

Kirsty recommends pairing the games with a bottle of 19 Crimes wine ‘for the full effect’. This brand of wine, where each bottle offers an augmented reality story about criminals from history, is available from Asda for £8.

‘We normally only fall out two to three times throughout, which has to be good going,’ she says of her and Marcus’s low-cost date nights.

Lynn Anderton, a conflict therapist who runs FONA (The F-Off Nicely Academy), reckons she saves around £30 to £40 by having her date nights at home and renting a movie using streaming services.

‘We’re not paying for tickets and high-priced snacks,’ she says. ‘I use Netflix and sometimes rent movies from other providers, usually at around £4.50 a time.’

Lynn, from The Wirral, met her partner Stuart during the pandemic. ‘We’ve always had date nights at home. We make it special, discussing what kind of movie we’d both like to see and snuggling up together to watch it.’

Money expert Francesca Henry, who runs The Money Fox Instagram page, knows how to save money but still enjoy good food by making ‘fakeaways’ that are better than the real thing.

‘My partner Massimo is Italian, and our favourites include pizza and Chinese. I find sweet and sour chicken easy to replicate,’ says Francesca, from Gloucestershire. ‘We spend around £15 on a takeaway, but the fakeaways can be around £5 or even less.’

Francesca and Massimo, right, also enjoy date nights using classic board games such as Scrabble. ‘We are trying to save in any way that we can due to the cost of living increases, but still spending quality time together,’ says Francesca.

Venture out and there are still deals to had.

‘Rush’ tickets and lotteries allow you to snap up tickets to best-selling shows cheaply. The Today Tix app runs lotteries and Rush tickets for productions including Frozen, and also the lottery for Hamilton which offers £10 tickets to the chosen few.

The National Theatre runs its own Friday Rush online, where £10 tickets are released and you can ‘queue’

If you aren’t picky about what you see, try tickets from the official London theatre – the online version of the booth in Leicester Square.

At the time of going to print, there were half-price tickets to Life of Pi, right, and The Lion, The Witch And The Wardrobe, both in London, available for Friday night. The selection changes daily.

If you use Compare the Market to buy any insurance policy (including a cheap travel insurance policy for a single day), you will be sent a code for Meerkat Movies, which gives you two-for-one cinema tickets on Tuesdays and Wednesdays for a whole year at big-name chains such as Odeon and Cineworld.

As well as the cheap cinema tickets, Compare the Market users can have access to Meerkat Meals, which offer two-for-one deals at participating restaurants. Timings tend to be restricted, so Friday night dates are out with this one.

Another option for two-for-one meals is a free 60-day trial of Tastecard, which offers nationwide deals on food at restricted times. Don’t forget to cancel the card at the end of the free period though, or you’ll be charged £5.99 a month.