Telstra will be forced to pay legal costs after losing a "David and Goliath" Federal Court battle over super-sized payphones.

The tech giant has been embroiled in a long-running fight against the cities of Melbourne, Sydney and Brisbane over plans to install 1800 new payphones featuring large LCD screens capable of screening four advertisements a minute. 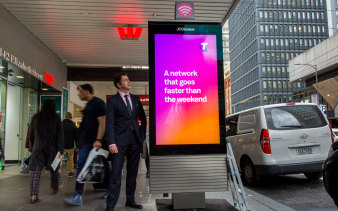 Telstra filed proceedings in the Federal Court in May last year to clarify the law after the City of Melbourne rejected its application for approval to run commercial advertising on 81 proposed new payphone billboards.

Under Commonwealth law, Telstra is permitted to install "low-impact" public payphone cabinets or booths without a planning permit if certain other conditions are met.

Telstra argued the new payphones were "low-impact" because they were not used to display commercial advertising "at the time of their installation", and planning approval would be required for them to do so.

But the councils argued the payphones were not "low impact" because they would carry third-party advertising, and should therefore be subject to the usual council planning approval process.

He ordered the councils to pay Telstra's costs.

The cities of Melbourne and Brisbane appealed this decision and, in the Federal Court on Friday, justices Jacqueline Gleeson, Natalie Charlesworth and Michael O'Bryan set aside Justice O'Callaghan's ruling.

They ordered Telstra to pay costs to Melbourne and Brisbane city councils. The effect of the ruling is that Telstra will now be required to seek planning approval before installing the next-generation payphones in those two cities.

Telstra will consider appealing the latest ruling. A spokesman said: "Telstra respects the decision of the Full Federal Court and is currently considering its options."

"We don't want people to be bombarded with oversized and intrusive commercial advertising on public infrastructure," he said.

"This was truly a David and Goliath battle and we're proud to get the right outcome for our cities from the Federal Court appeal. All along we have maintained that the supersized phone booths are designed to generate advertising revenue for Telstra at the expense of our community."

Our Morning Edition newsletter is a curated guide to the most important and interesting stories, analysis and insights. Sign up here.

11/20/2020 Lifestyle Comments Off on Telstra ordered to pay costs after telco loses payphone fight
Recent Posts
We and our partners use cookies on this site to improve our service, perform analytics, personalize advertising, measure advertising performance, and remember website preferences.Ok