It’s tough being a mom.

Teddi Mellencamp fell to the floor and busted her lip after suffering a bout of vertigo while rushing to answer her daughter’s cries in the middle of the night.

“Anyone got any hot tips on how to get rid of Vertigo?” the “Real Housewives of Beverly Hills” alum, 40, wrote in an Instagram post Sunday of experiencing the sensation of dizziness or spinning.

“At 4am, Slate yelled out for me to please come to her room and as any Mom would I jumped up at mock speed and sprinted in there.”

But by the time she got to her daughter’s room, Mellencamp suddenly lost consciousness and tumbled to the ground.

“My eyes went black and I fainted and busted open my cheek and lip,” she wrote. “Luckily all was good with Slate and something worse didn’t happen to me.”

The former Bravolebrity concluded her post by noting that she would make an appointment with her doctor.

Mellencamp posted photos and video of her banged-up face where her lip was swollen and her eye was black-and-blue.

The accountability coach, whose dad is rocker John Mellencamp, later gave an update, saying that she was starting to feel better but that two of her teeth felt loose.

She also recorded a video of herself showing off her injuries while jokingly singing LMFAO’s song “Sexy and I Know It.” 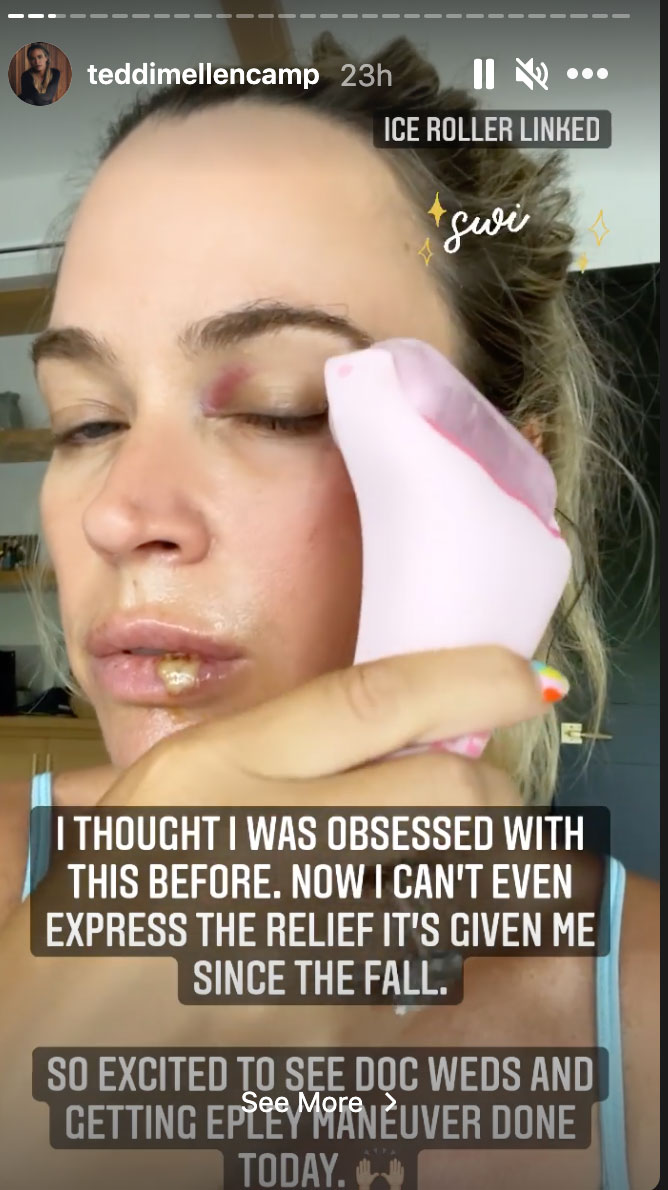 Mellencamp’s Bravo pals flocked to the comments section to lend their support and keep things light.

“Did tequila terry go to Slates room or was it Teddi ? Asking for a friend. 😍,” her former “RHOBH” co-star Lisa Rinna wrote.

“No! 🥺 You and Kyle both! 😢,” their castmate Dorit Kemsley wrote, referring to Kyle Richards’ recent bee attack.

“We are a good team #hotmessexpress,” Richards, 52, chimed in, to which Mellencamp responded, “Put us in bubble wrap.”

“Omg you poor thing. I hope you’re feeling better soon and get some answers from the doctor,” fellow “Housewife” Tamra Judge said.

Fortunately, Mellencamp’s injuries didn’t stop her from partaking in her usual fitness routine, as she later posted videos to her Instagram Story looking energized during a workout.