Sydneysiders have scrambled onto ocean rocks and settled between roof racks to soak up a rare day of sunshine before storm clouds that could bring snow to NSW roll across the state next week.

Coming to the end of Sydney’s wettest October on record, the city sparkled under a cloud-free sky and enjoyed a high of 26 degrees on Saturday.

Sunday will serve up another precious spring day, with warm temperatures, clear skies and weaker winds than Saturday.

But the rain will return on Monday night.

A trough sweeping across the state from the west on Sunday will generate rains and storms across most of NSW. The Bureau of Meteorology warned that rain hitting already waterlogged ground and swollen rivers across NSW could see more flooding around inland catchments early next week. 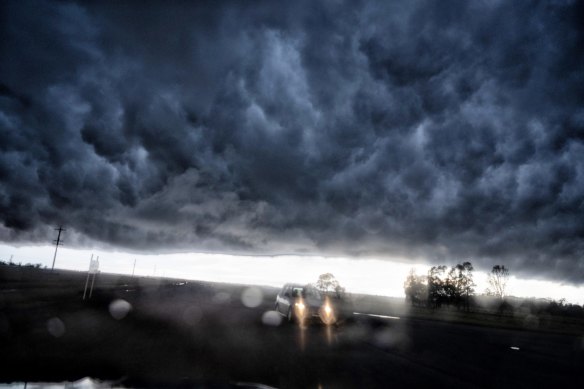 The turbulent underside of a shelf cloud near Griffith earlier this month.Credit:Nick Moir

A cold front will follow, bringing colder and windier conditions.

Weatherzone meteorologist Ben Domensino said some parts of the country, including NSW, could even see an unseasonably late dumping of snow.

“A mass of frigid air spreading over south-eastern Australia in the wake of a front should cause snow to settle in Tasmania, Victoria and NSW between Monday and Thursday next week,” he said.

“Some areas could see around half a metre of fresh snow across these four days.”

Katoomba will plunge from a high of 21 on Monday to just 12 degrees on Tuesday and the icy blast could bring snow to parts of the Blue Mountains.

Half a metre is predicted to fall across the Snowy Mountains, while some peaks in the Central Tablelands could also be dusted with a few centimetres on Tuesday night.

Skies should be relatively clear for those celebrating the Melbourne Cup in Sydney on Tuesday. The forecast is for 24 degrees, although a chance of scattered thunderstorms could dampen fascinators in the afternoon. Even so, it’ll drier than Flemington as Melbourne braces for chilly weather and a strong chance of showers on race day.

November could be the last month of record-breaking rain as meteorologists forecast La Nina could finally break up in December and other moisture-summoning weather systems will ease.

In the meantime, Sydneysiders can make the most of the rare sunny weather on Sunday with a stroll through Sculpture by the Sea in Bondi, which is open until November 7. Alternatively, the Le Petit Salon de Sculptures is on at the Q Station, an exhibition created to showcase the artworks rejected by Sculptures by the Sea.

Our Breaking News Alert will notify you of significant breaking news when it happens. Get it here.

Most Viewed in Environment