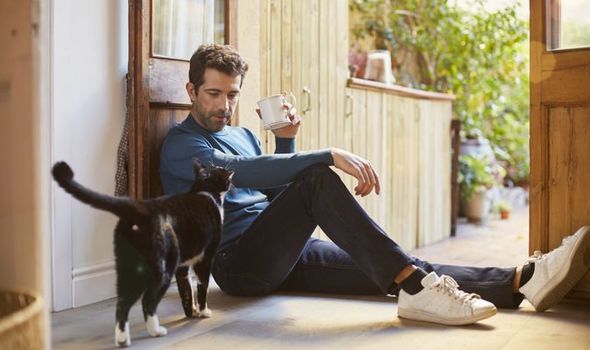 Of the cat-chelors surveyed, around one in four think their moggy has taken the pressure off being single, as they are good company in lieu of a girlfriend. Another 29 percent like having their cat around as they are “good to talk to”, and one in two believe their pet helps “keep them calm”. One in 10 even went as far to say their cat offered “counsel” through an emotional break-up. Jonny Gould, the CEO for pet wellbeing firm Itchpet.com, which commissioned the study, said: “The news comes as a blow for man’s best friend, with a quarter of single men going as far as to say cats are on their way to usurping dogs from their throne.

“Our feline friends can often come up against a bit of stick for being independent and aloof, so it’s great to shine a compassionate light on how the nation’s cats are taking care of us.

“Cats can offer great emotional support, so it’s only fair that we take care of them in return.”

The study also found that worse still for dogs, more than one third of the single men polled who own a cat said purchasing one was the best thing they had ever done.

One in four think their furry friend helps them to come across as a more loving person, and one in six believe their cat has helped them get more dates.

It also emerged the feline effect can sometimes pose challenges with one in five cat-owning single men having to cut a date short when it became clear their potential partner wasn’t a moggy-lover.

More than a third of single cat owners are also put off by the nitty-gritty aspects of cat ownership, like emptying the litter tray and giving flea and worming treatments.

Despite the squeamishness, nine in 10 believe their cat has a good quality of life living with them, and 76 percent take their cat to the vets at least once a year for a check-up.

Gould added: “For millennia, cats have been revered as everything from divine beings and supernatural sprites to internet sensations.

“As well as reigning the internet, our study has uncovered yet another string to our feline’s bow – emotional and friendly support for the single men of Britain.

”From our research, it’s great to see that so many of our cat-chelors are taking their pets to the vet regularly, however only 23 per cent are flea-ing every month, leaving our furry pals at risk.

“Fleas are a nightmare for our pets. The Itch flea monthly subscription pack makes it really easy to protect your pet so you never forget a treatment ever again.”

The study also polled the views of cat-free single men to see how they view their moggy-male counterparts.

One in five single men believes owning a cat would have a positive impact on their romantic lives.

Three in 10 think potential dates believe men who have a soft spot for animals are more attractive.

And one in five single men believes would-be partners perceive men who own a cat as more caring and compassionate.

Related posts:
07/30/2019 Lifestyle Comments Off on Single men think having a cat eases loneliness
Recent Posts
We and our partners use cookies on this site to improve our service, perform analytics, personalize advertising, measure advertising performance, and remember website preferences.Ok