Shaynna Blaze is an interior designer who has been a judge on The Block for 14 seasons, and helped homeowners improve their properties on Selling Houses Australia. In her new series, Country Home Rescue, she is doing the renovating herself, restoring an old home in Kyneton, Victoria, with the help of her children, daughter Carly and son Jess. 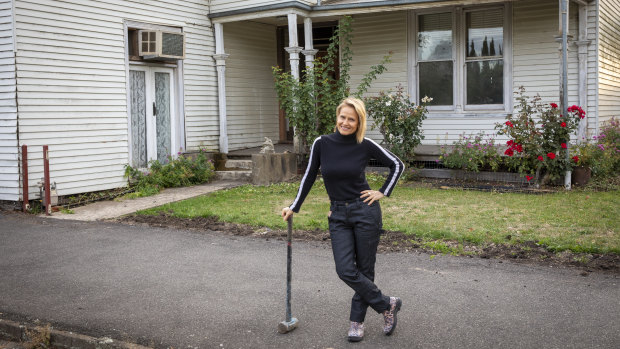 You’ve spent a long time on TV in various roles, but this is a little bit different: it’s your own project, with your own family. Is that a little bit scary?

It is and it isn’t. I feel like it was important for me to share this because there’s so much focus on houses for sale, houses for profit, and not enough focus on seeing how do you do it for you, who are you, what’s your personality. And I thought the best way to do that is to invite them into our home, our family, and my life, to see my process, and how they can adapt it to them.

Was it difficult to convince your kids to join in?

My daughter was straight in, she goes, “Yep, I’m up for it.” Whereas my son was more, “Hmmm, not sure, can’t …” Because he’s not active on social media, it’s not that he’s private-private, it’s just that he’s more behind the scenes. I was just like, “Well, unless we’re doing it all together, we can’t”, so it was a little bit of two against one. But once he was in he was in, all the way.

So it was democratic, that’s the way this country runs.

Absolutely! Well, when you’ve got your mother and your sister looking at you, going, ‘If you don’t agree, you’re not going to make us happy …’

Oh my god, how have you escaped that world, we’re so big on it in Australia!

Well, this is the thing: I’ve watched a lot of TV about it, but I’m still pretty ignorant. Do you find people that you meet still don’t really understand what you do, despite your celebrity?

Absolutely. I think even on the weekend, someone said, “Oh, can we just get someone who knows more than cushions?” And I just had a chuckle to myself, I thought obviously you don’t do your research, I’ve been doing it for 35 years, I do houses from scratch, I design furniture, I design wallpaper, I design ranges. So maybe this (new show) will help people understand what I do: I have experience in so many areas – not just cushions!

I’m trying to imagine someone who built their career on just cushions. It seems like you’d really be restricting your options.

Although there are big industries in cushions. But you can’t build a TV career on just cushions.

You can’t be a cushionologist.

Actually, assume that I am an aspiring Shaynna Blaze wannabe. How does one become you?

Well, there is only one of everybody, but if they wanted to aspire to similar things … I left high school, I went to design school, and then from design school I started my first job within a week of graduating, designing showrooms all around the country. And then I did a full-time writing course, so I was writing magazine articles, wrote two books. I worked in the commercial world first, and that taught me a lot about practicality and functionality. It was about structure, form, flow, things that were practical, things that could last over time. There was a lot of structure that I was shown that I’ve taken with me from day one. And I now design ranges, furniture, collaborations with homewares, bathroom ware. There’s so many different parts. And that comes through years of experience of knowing what works and what doesn’t. And also breaking the mould: that’s what I think a lot of people see, I break the mould. And to do that you have to not be scared of doing something that people won’t like. You’ve got to be comfortable with that. If you’re going to build your career on cut-and-paste, that’s not the career if you want to go in my direction.

That’s universal in the creative life, isn’t it? Whether you’re writing books, making music, painting pictures, the greatest challenge is to do something of your own and not just copy what’s come before.

Exactly. And I think if you’ve got that part of you, it gives you longevity because you’re not afraid to make mistakes, and you learn by mistakes. And I’m not talking monumental, I’m talking about, “Well, that colour didn’t work, we’ll try something else.” It doesn’t mean your whole livelihood sits on one decision. So you’ve got to be a little bit fearless.

Has that resulted in the past in you getting pushback from clients who don’t understand what you’re going for, and they want you to do something they’ve seen before?

Well, it’s interesting because I get employed because they don’t want something they’re familiar with. But then it comes down to it, they’re like, “Oh, is that too far, do I want to go that far?” So you just come to this compromise. I feel like I take people to a space they don’t realise they want to be in. And then once we get to that level we compromise. But I like that psychology of pushing people outside their comfort zone, and I think design should do that.

Country Home Rescue is on Nine, Wednesday at 7.30pm.

Find out the next TV, streaming series and movies to add to your must-sees. Get The