A secret report into a $100 million sports funding program told former prime minister Scott Morrison there were “significant shortcomings” in the scheme, including concerns about fairness in the way the money was spent.

The report by former public service boss Phil Gaetjens also found that former sports minister Bridget McKenzie had an “actual conflict of interest” with her membership of a gun club that received some of the taxpayer cash. 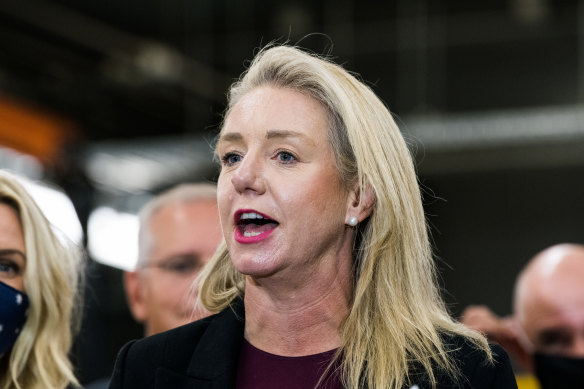 Bridget McKenzie resigned as minister the day after Phil Gaetjens finished his report with its conclusion that the minister broke the ministerial code of conduct.Credit:James Brickwood

The findings have been revealed in full after the release of the February 2020 report under freedom of information laws, long after the Coalition unveiled the funding blitz on sports grounds and facilities in the run-up to the 2019 election.

McKenzie resigned as minister the day after Gaetjens finished the report with its conclusion that she broke the ministerial code of conduct by failing to disclose her membership of the Wangaratta Clay Target Club, as revealed by this masthead.

Gaetjens, who was secretary of the Department of Prime Minister and Cabinet after serving as chief of staff to Morrison when he was treasurer and prime minister, defended the $100 million scheme but admitted to key flaws in handing out grants.

“I find there were significant shortcomings in the process undertaken by the minister and her office that give rise to issues around the fairness and probity of that process,” he wrote on February 1, 2020.

The confidential report came two weeks after the auditor-general issued a scathing review of the program, which was soon dubbed “sports rorts” because the audit found the spending had favoured marginal electorates the Coalition wanted to win.

The furore over the scheme led to revelations of a colour-coded spreadsheet prepared by the minister’s office to show projects and their electorates, although the Gaetjens report acknowledged that documents were not kept and it was difficult to confirm the reasons for each grant.

While Gaetjens acknowledged the failings on probity and fairness, he told Morrison the minister had the ultimate authority to make the final decisions on each grant.

“The guidelines clearly and publicly identify the minister as having final approval authority and the right to consider other factors. This discretion was not constrained in any way by the guidelines,” he wrote.

As well, Gaetjens defended the government on the key audit finding that political decisions influenced the grants because the Coalition targeted marginal seats.

He disputed a key finding in the auditor-general’s report that the funding decisions were based in part on a spreadsheet prepared in November 2018 to identify marginal and target electorates.

Australian National Audit Office executive director Brian Boyd later told a Senate inquiry that 43 per cent of the approved grants, or 294 projects, were ineligible by the time they received funding, often because of delays in the ministerial oversight of the scheme.

Gaetjens found, however, that the spreadsheet was not the basis for the final decisions.

“The data indicates that applications from marginal or targeted seats were approved by the minister at a statistically similar ratio (32 per cent) compared with the number of applications from other electorates (36 per cent),” he said.

“After careful analysis, I can find no basis for the suggestion that political considerations were the primary determining factor in the minister’s decision to approve the grants.”

Gaetjens said McKenzie had told him she had never seen the spreadsheet.

On the grants to the Wangaratta Clay Target Club, however, the public service boss found the minister had breached the ministerial standards.

“The minister’s membership of the WCTC created an actual conflict of interest where that organisation had applied for and receiving [sic] funding under the program, with the minister’s decision being made after she became a member,” he wrote.

“This conflict should have been declared to you and managed. I consider the failure to do this is also an apparent breach of the standards.”