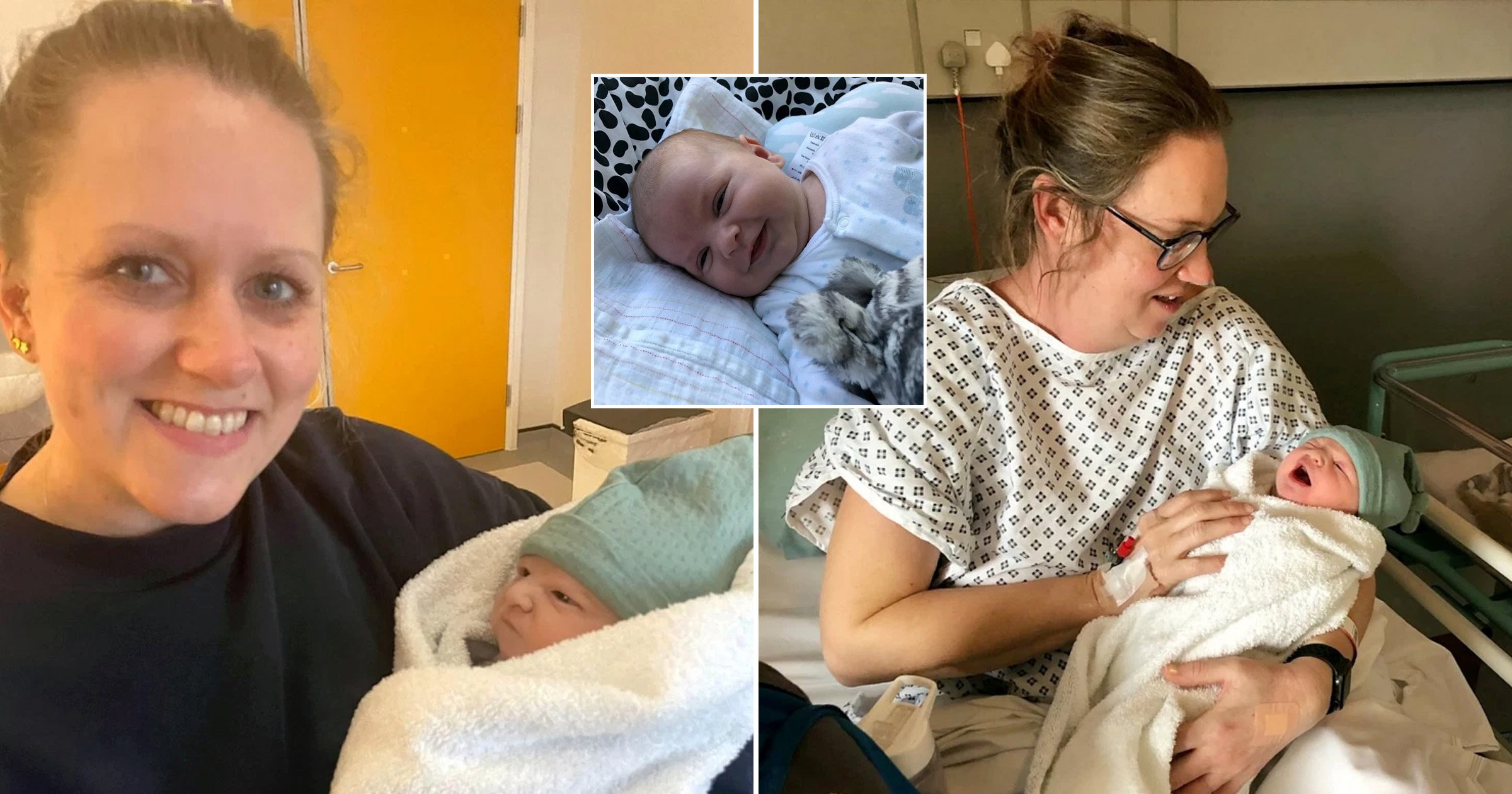 A school nurse who missed out on five chances of having a baby finally fulfilled her dream of being a mum when a teacher friend agreed to be her surrogate.

Katherine Bateson, 41, endured four years of anguish in a desperate attempt to have a baby with her PE teacher husband Alan, 39.

The couple conceived naturally but Katherine had a miscarriage before four failed rounds of IVF.

They then decided to use a surrogate and matched with a woman but were heartbroken when she changed her mind.

Katherine was comforted by Lisa Williams, 42, a PE teacher with Alan, who volunteered to be her surrogate.

‘But I have an autoimmune disorder and we tried every drug going, and then we had two embryos left and it was at that point that we did look at adoption, but thought with two embryos left it was worth trying with a surrogate rather than with me again.

‘We just didn’t know if it was something with my body that wasn’t working properly.

‘And my mental health was struggling so we decided I couldn’t do IVF any more.

‘I just found it so hard and quite traumatising, the whole process and everything that comes with it.

‘It’s like one moment you’re really excited and doing the egg transfer and the anticipation of the two-week wait, and then to get the news you’re pregnant and something goes wrong, it is physically and mentally draining.’

Katherine added: ‘We were really nervous about the whole surrogacy route as obviously it’s not that well known about and often you have to sort of navigate it all yourself.

‘I know it’s a lot you’re asking of someone to do, but it was just awful and devastating and to think we might have to wait another six or 12 months, it was just like our life was on hold.

‘I was actually in my office when I got the call and Lisa had just walked in and I told her what had happened and was just crying.

‘She then took me out for dinner and offered to become our surrogate and it just went from there.

‘Throughout the whole pregnancy we had a group chat together with our husbands and we would text and get over the first seven weeks, then the first months, and then when he was viable we started to allow ourselves to get excited.

‘It was just so nice to see the chat relaxing as the pregnancy went on.

‘For me, during the labour, it was like I was the man and I was there being a spare part as I couldn’t really do anything, and I did find it hard watching a friend go through that and had that sense of guilt and that we had asked too much.’

The couple live near Lisa, her accountant husband Richard, 47, and their three children, Grace, 12, Oliver, 15, and Zac, nine.

Lisa, who had her first child through IVF, said: ‘That was one of the linking factors to the whole story as we had gone through struggles ourselves.

‘But I have worked with Katherine’s husband for the last five years so I met her through him and we just struck up a friendship and got on really well, and I guess that’s when she opened up about their struggles.

‘I just remember her being absolutely devastated, it was like her whole world had collapsed when they phoned and told her the surrogate had fallen through — it was just horrible.

‘So that’s when I said I could do it, and went and spoke to my partner who thought it was a great idea.

‘People keep saying it’s such a lovely thing to do and I’m amazing, but I don’t quite grasp it.

‘I think I know I have done a really nice thing but don’t think I deserve all the heroics.

‘I just keep saying to everybody, I’m the incubator and the oven.

‘There was never any feelings of I’m giving up my child because he wasn’t my blood or any genetic connection.’