SARAH VINE: I swear we voted in the Tories. So how did we end up with a Labour budget? It will suck all hope and aspiration out of your average working man or woman

That’s odd. I could have sworn this country voted for a Conservative majority at the last election. So why have we ended up with a Labour budget?

I doubt whether even Jeremy Corbyn could have come up with a less Conservative autumn statement than this.

One guaranteed — whether by design or accident — to suck all hope and aspiration out of your average working man or woman; to ensure that whatever green shoots of recovery might have been tentatively stirring in the scorched earth left behind by Covid wither and die; and to consign the country to two more years — at least — of economic gloom.

Where Liz Truss’s fiscal policies caused fireworks — albeit the kind that blow up in your face — this is a damp squib. Unimaginative, devoid of vision, it’s almost Dickensian in tone and scope. It offers nothing save the dank rhetoric of doom, delivered with the sanctimonious piety of the hair-shirted.

Not for everyone, mind. If you’re on benefits, your payments will keep rising with inflation — and you’ll get a special £900 payment. If you’re a local authority, you’ll be able to charge your residents more for council tax. There are no plans to scrap the ruinously expensive HS2; and as for the NHS (sorry, ‘our’ NHS), that vast money-guzzling behemoth will be ring-fenced. Phew. Those £2,500-a-shift agency nurses need not worry.

This budget is a kick in the teeth for hardworking people, a squeeze on strivers and small businesses already struggling after the past few years.

Instead of incentivising growth, rewarding ambition and increasing productivity — as a Conservative administration should do — this Government has set out a thoroughly demoralising plan. It’s almost guaranteed to make most people hit the snooze button and crawl back under the duvet. 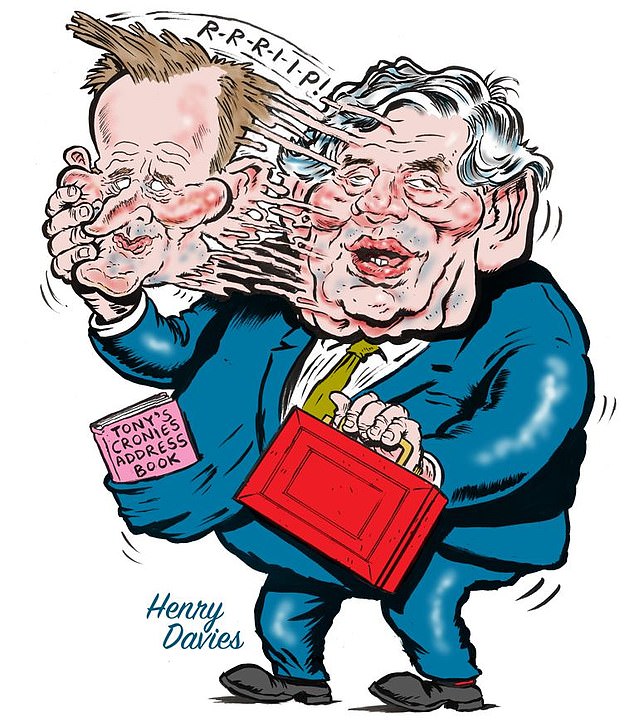 That’s odd. I could have sworn this country voted for a Conservative majority at the last election. So why have we ended up with a Labour budget?

What frustrates me so much, as a Conservative supporter, is the lack of ambition. Yes, Truss and Kwasi Kwarteng went too far with their bold reforming vision; but Rushi Sunak and Jeremy Hunt have gone completely the other way.

Where are the bright ideas, the energy and enthusiasm? Where’s the imagination, where’s the courage of a leader determined to drag his country out of the mire? This all feels as wet and predictable as November rain. It’s all so damned uninspiring.

Yes, the markets demanded caution. But the chances of the Tories winning the next election are now vanishingly slim.

What do they have to lose? Instead of simply smoothing the path for Keir Starmer’s tax-and-spend agenda, why not offer up a sliver of hope?

That’s what’s missing here. Hope, and the emotional intelligence to understand that the country needs more than dire predictions and tired cliches about resilience and grit. As we discovered during the pandemic, people can surprise themselves if they can see a glimmer of light at the end of the tunnel.

Which brings me to another thing. This is not merely a cost of living crisis: it’s a cost of Covid crisis.

Sure, Russia and global energy prices have helped to stoke inflation, but one crucial driver of Britain’s catastrophic fall in economic fortunes has been Covid — and in particular the lockdowns that strangled our economy and cost billions in furlough and lost business.

At the time, the hysterical and emotive response by many to the pandemic made it virtually impossible for anyone, politician or otherwise, to argue against the wisdom of lockdowns. 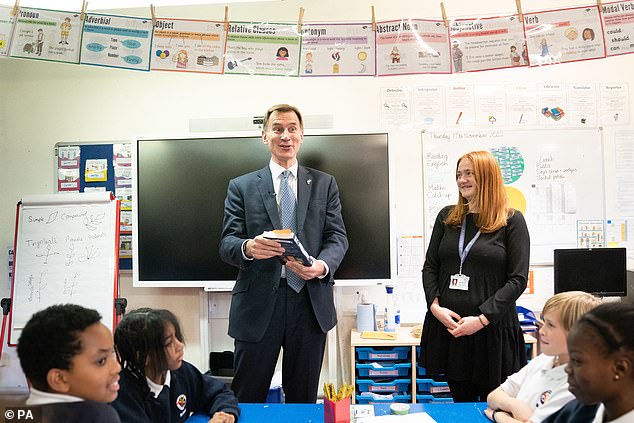 What frustrates me so much, as a Conservative supporter, is the lack of ambition. Yes, Truss and Kwasi Kwarteng went too far with their bold reforming vision; but Rushi Sunak and Jeremy Hunt  (pictured at St Jude’s Primary School this afternoon) have gone completely the other way

Indeed, one of the main unfair criticisms of Boris Johnson was that he was too prone to locking the country down: a natural libertarian, he preferred to let people choose how to live their lives. But the chorus of people demanding we shut ourselves off to the world, paid for by the state, drowned out all other views.

The truth, however, is that putting the economy into an induced coma — on and off for two years — has helped to spark an economic crisis that will blight the lives of many for years to come.

Lockdown may even end up costing far more lives than it saved, for the simple reason that, while it may have prevented many elderly and vulnerable people from succumbing to the virus, growing numbers of people are now dying as a result of undiagnosed illness or delayed treatment. 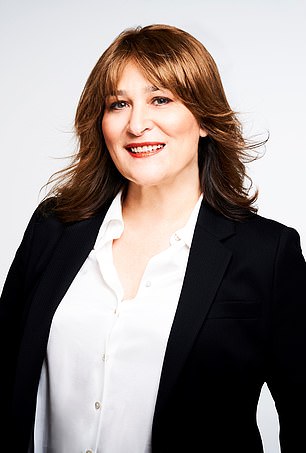 Sarah Vine: This budget is a kick in the teeth for hardworking people, a squeeze on strivers and small businesses already struggling after the past few years.

If Boris had not insisted on pursuing a vaccine and then opening up the country as soon as humanly possible, we would be in an even worse situation.

As for Labour, howling from the opposition benches about the deficit and ‘austerity’: let’s not forget that Starmer was one of the most rabid lockdown zealots of all. This is as much his responsibility as the Tories’.

But politicians won’t discuss these uncomfortable truths. Nor will they admit another thing: that the primary purpose of lockdown was not just to protect the vulnerable but also to ‘protect the NHS’ from being overwhelmed by a surge in hospitalisations.

Yet it’s the NHS that’s supposed to protect us. And while the health service is staffed by some wonderfully dedicated people, it is a black hole of inefficiency.

During the peak of the pandemic, it was paying millions a day to commandeer private hospital space that was rarely, if ever used. It could not staff the special Nightingale hospitals built to cope with extra Covid patients.

For all the goodwill and countless billions thrown at it by successive administrations, it is clearly not fit for purpose.

Yet again, though, the NHS has been ‘ring-fenced’ and protected from any accountability by a Conservative Chancellor who spent nearly six years in charge of that very same organisation, and who summarily failed to have any meaningful impact on the structural deficiencies that prevent it from working properly. 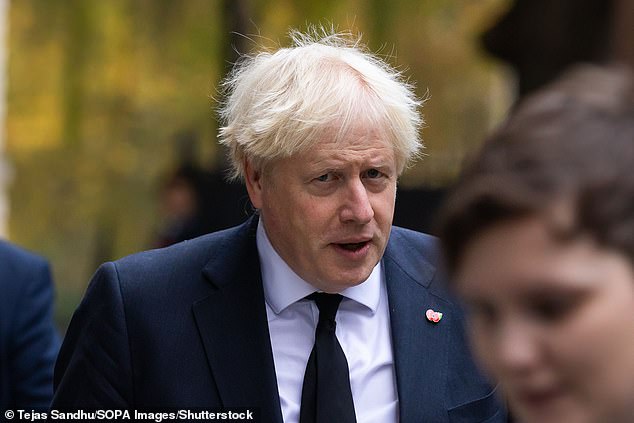 One of the main unfair criticisms of Boris Johnson (pictured) was that he was too prone to locking the country down: a natural libertarian, he preferred to let people choose how to live their lives

Such dogged determination to prop up a failing public service is socialism, pure and simple. As is the Government’s approach to the welfare system, which once it vowed to reform but which now exists not as temporary assistance to those in financial difficulty or a safety net for the vulnerable, but as a lifestyle choice for vast numbers of the population.

And who can blame them, when those on even the lowest incomes are now being asked to pay more tax while being squeezed by rising costs? Where’s the incentive to come off benefits when the average wage won’t even begin to cover the bills?

The truth is that unless the Government finds a way of balancing out the measures in this budget with corresponding ones to streamline, reform and modernise our creaking public services — and provide the beleaguered British taxpayer with a modicum of value for money — they are no better than Labour.

That is Sunak’s challenge now. To prove to those who awarded Boris his 80-seat majority that this administration can be true to the core Conservative values of aspiration and self-determination.

He must understand where his true support base lies — and show that he has the courage not only to acknowledge the real problems in our society (however un-PC that may be) but to tackle them head-on.

11/17/2022 Lifestyle Comments Off on SARAH VINE: How did we end up with a Labour budget?
Recent Posts