A newly elected Republican Congresswoman from Georgia is defending her decision not to wear a mask while locked in a secure room with other House members during the attack on the U.S. Capitol last week. Rep. Marjorie Taylor Greene also said it was “insane” for Democrats who have since tested positive for COVID-19 to blame Republicans.

“It is absolutely ridiculous and insane to blame us,” Greene told Fox News. “[We] did not have COVID or any symptoms.”

Greene spoke after Democratic Representatives Brad Schneider, Bonnie Watson Coleman and Pramila Jayapal all tested positive for COVID-19. The attending physician for the Capitol had warned members they may have been “exposed to another occupant with coronavirus infection.”

Greene told Fox News she tested negative for COVID-19 on Jan. 4 and said that Americans should not be forced to wear a mask.  She added that “healthy people do not spread COVID.”

Health experts have repeatedly warned that asymptomatic people can still spread COVID-19 to others. 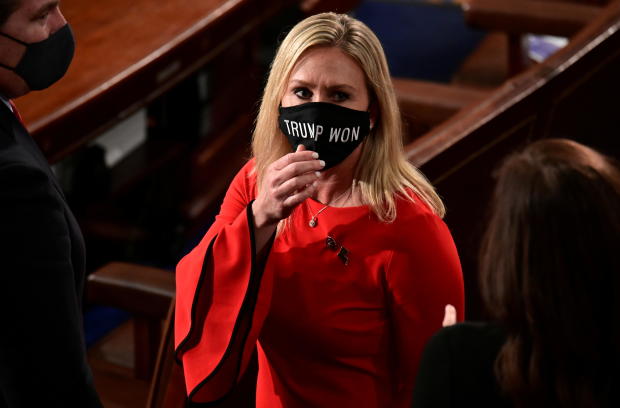 Dozens of lawmakers were whisked to the secure location after a pro-Trump mob stormed the Capitol last week, breaking through barricades to roam the halls and offices and ransacking the building. Video obtained by Punchbowl News showed several Republican members — including Greene — declining to wear masks, even as they were locked in a secure location for several hours.

After announcing their positive tests this week, Schneider, Coleman and Jayapal have lashed out at the lawmakers who refused to wear masks.

“Several Republican lawmakers in the room adamantly refused to wear a mask…even when politely asked by their colleagues,” Schneider said. “Today, I am now in strict isolation, worried that I have risked my wife’s health and angry at the selfishness and arrogance of the anti-maskers who put their own contempt and disregard for decency ahead of the health and safety of their colleagues and our staff.”

Jayapal noted in her statement that “several Republicans not only cruelly refused to wear a mask but mocked colleagues and staff who offered them one.”

I just received a positive COVID-19 test result after being locked down in a secured room at the Capitol where several Republicans not only cruelly refused to wear a mask but recklessly mocked colleagues and staff who offered them one.https://t.co/wVmgroKsdf

Grace Segers contributed to this report.

01/13/2021 Lifestyle Comments Off on Rep. Marjorie Taylor Greene defends not wearing mask during Capitol attack lockdown
Recent Posts
We and our partners use cookies on this site to improve our service, perform analytics, personalize advertising, measure advertising performance, and remember website preferences.Ok