It was just a couple of weeks ago that Nova 100’s breakfast show hosts Chrissie Swan, Sam Pang and Jonathan Brown triumphantly announced that they will be hanging up the mic in December after seven hugely successful years on air. But the latest radio ratings results suggest some listeners have been tuning out a little earlier.

The Chrissie, Sam & Brownie show has recorded a loss of around 15 per cent of its average audience in the months from August to October, when compared to the previous survey period. The drop (which is around 11,000 listeners in real terms) is the largest the show has recorded in any ratings period during the past year. 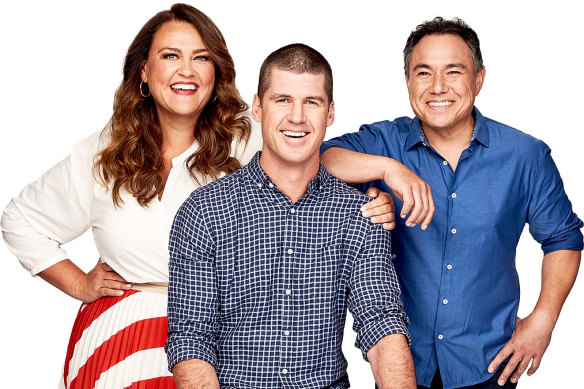 Nova’s breakfast team of Chrissie Swan, Jonathan Brown and Sam Pang are hanging up the mic at the end of this year.Credit:Nova

Ben Latimer, head of programming for Nova, says he’s not concerned about the individual result and instead prefers to focus on broader trends.

“If you look at the year as a long line, it all averages out to where you would normally be … It’s fair to say there’s been some fluctuations during the year in terms of average audience, but that’s really across the board with all FM stations.”

In fact, Chrissie, Sam & Brownie has seen an increase in average audience over the past year (adding around 7000 listeners from the same survey in 2021). And it’s certainly true that they’re not alone in feeling the pain of this particular “fluctuation”.

The breakfast show’s main competitor, Fifi, Fev & Nick on 101.9 Fox FM, suffered an even greater drop in this ratings period, losing 14,000 listeners in average audience (approximately 21 per cent when compared to the previous survey). Fox also saw the greatest drop in overall audience share, going from 9.3 per cent to 8.3 per cent.

Nova, meanwhile, fell from 7.9 per cent to 7.4 per cent while other stations like 3AW, ABC Melbourne, and Triple J saw modest increases.

Latimer broadly attributes the drops in the FM market to the quirks of the survey methodology and “post-lockdown life in Melbourne”, where the audience who listen in their cars while commuting, for instance, might not be as reliable.

But he’s backing the outgoing Nova breakfast show hosts to finish the year strong, before their final show on December 2: “What we see with almost all shows that wrap up is this wave of listeners that come to the show to hear that final run home. We’re going to make sure to send the guys off on an absolute high.”

The long-time hosts will then be replaced by former Triple J breakfast hosts Ben Harvey and Liam Stapleton, who have been at Adelaide’s Nova 919 since 2020. They will be joined by their long-time producer Belle Jackson, who is originally from Melbourne.

Nine Entertainment Co, the owner of 3AW, is the publisher of this masthead.

Our Breaking News Alert will notify you of significant breaking news when it happens. Get it here.