Princess Mary has stunned onlookers in a gorgeous plum-coloured ensemble reminiscent of Queen Elizabeth II’s monochromatic colour dressing to hand out a host of research awards.

The 50-year-old mother-of-four visited Copenhagen Hotel on January 11 for the proceedings, which were presented in honour of the Danish Heart Association and The Children’s Heart Foundation.

She wore the Bicolour Cutout Point-Toe Black and Burgundy Suede Pumps from Prada and matched it with the Navy Calfskin Leather Clutch from Quidam Bags.

Mary’s choice to wear the colour purple in varied shades harks back to Queen Elizabeth’s sartorial choices, with the late monarch often spotted in the same shades for an event.

Mary is a patron of both the The Danish Heart Foundation and The Children’s Heart Foundation, and was only too happy greeting the award recipients and those on the boards of both foundations. 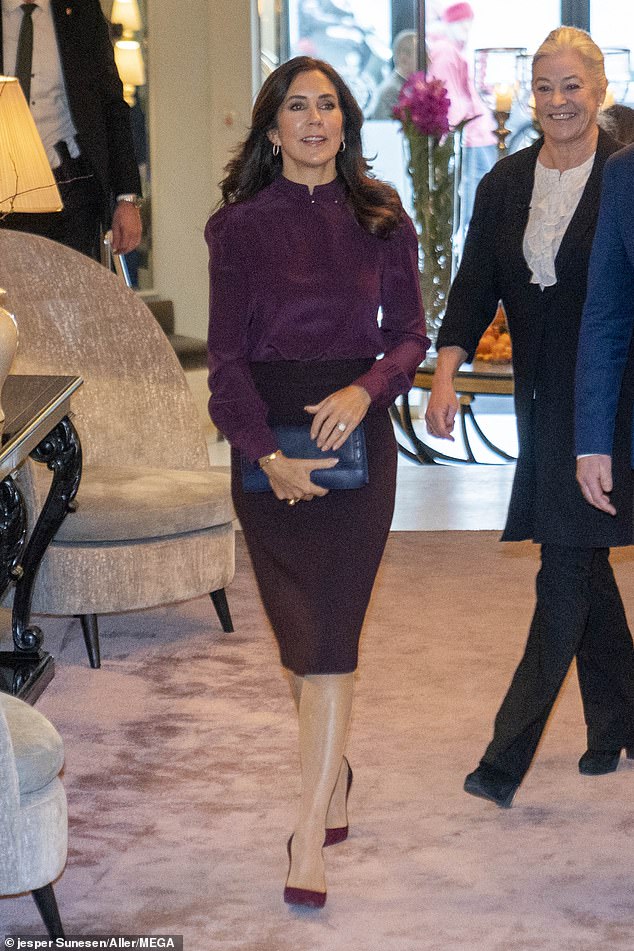 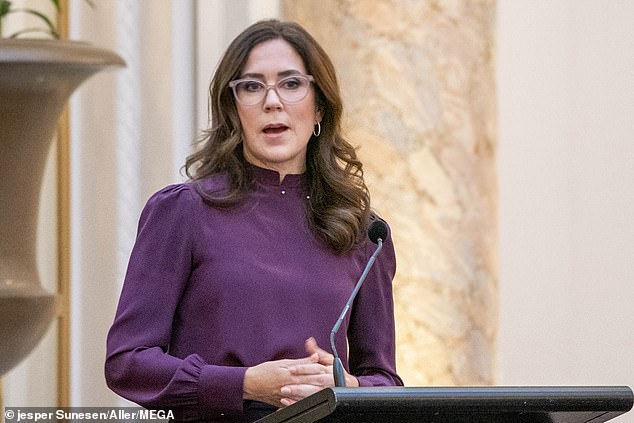 The 50-year-old mother-of-four visited Copenhagen Hotel on January 11 for the proceedings, which were presented in honour of the Danish Heart Association and The Children’s Heart Foundation 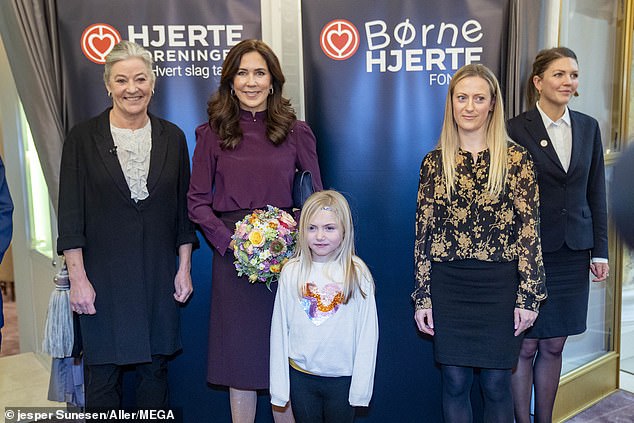 Mary is a patron of both the The Danish Heart Foundation and The Children’s Heart Foundation, and was only too happy greeting the award recipients and those on the boards of both foundations

Just two days ago Crown Prince Frederik and Mary released new photos of their twins to celebrate their birthdays.

Although the Danish Royal Family have previously shared single photos of the siblings together for their birthday, the household decided to break from tradition this year.

Instead of holding a photoshoot for the occasion, the proud parents have released their children’s school photos – taken by photographer Jens Rosenfeldt. 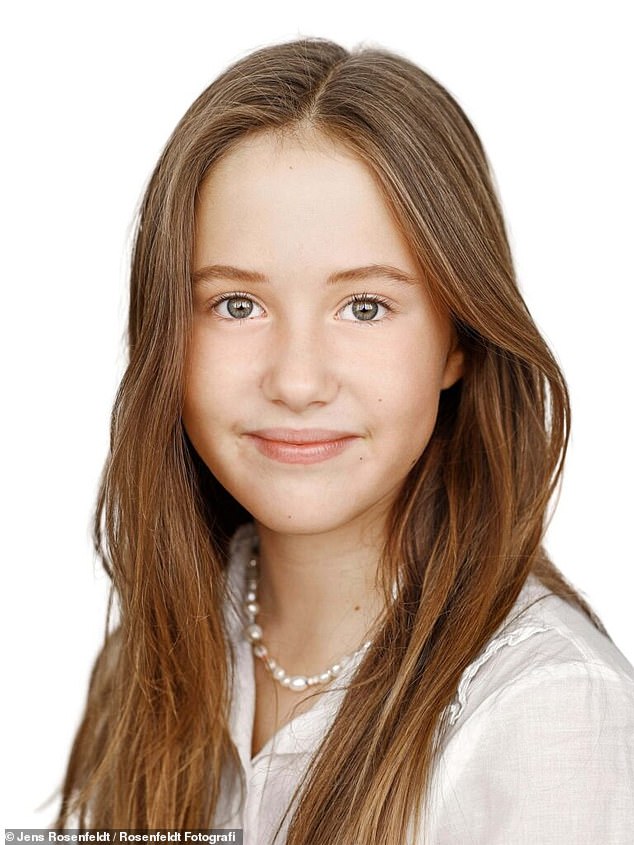 While Prince Vincent is the spitting image of his father Crown Prince Frederik, Princess Josephine has also inherited her mother’s thick long hair.

Prince Vincent – who was born 26 minutes before his sister in 2011 – is dressed casually in a faded purple hoodie as he beams at the camera.

Meanwhile, Princess Josephine is pictured in a plain white shirt and pretty pearl necklace for her school picture.

The twins are fourth and fifth in line to the throne and are currently attending the Tranegård School in Hellerup, Denmark, where their elder siblings Prince Christian, 17, and Princess Isabella, 15, were also enrolled.

The images were shared on the Danish Royal Family’s official Instagram account with the caption: ‘The Prince and Princess are celebrated by the family, and the Crown Prince Couple have the pleasure of sharing new photos of Their Royal Highnesses.’

In September, the European monarch announced that the four children of her younger son, 53-year-old Prince Joachim, would no longer be able to use the title of prince and princess after January 1.

She has said the decision was intended to allow Nikolai, 23, Felix, 20 – born from Joachim’s first marriage – and Henrik, 13, and Athena, 10, to live normal lives without royal obligations.

Instead of being Princes and Princesses, they are Counts and Countess and referred to as Their Excellencies – a change which is now reflected on the household’s website. 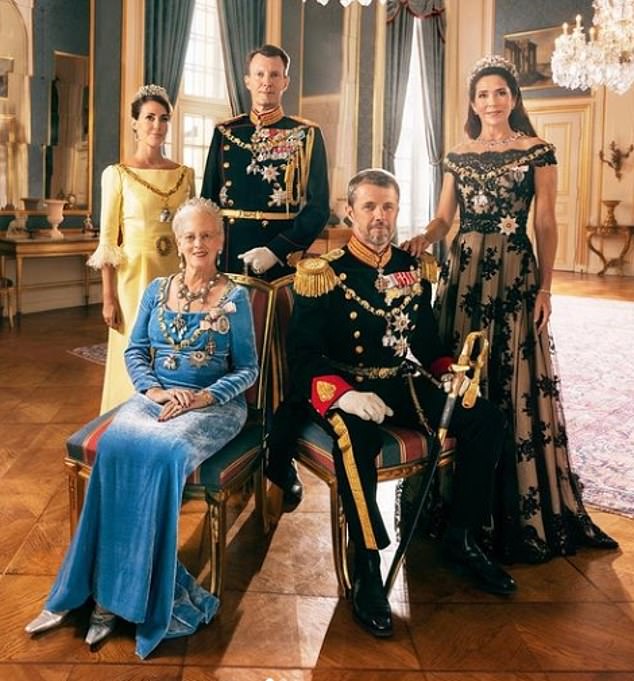 The Danish Queen (pictured with her sons and their wives) has said the decision to was intended to allow Nikolai, 23, Felix, 20 – born from Joachim’s first marriage – and Henrik, 13, and Athena, 10, to live normal lives without royal obligations 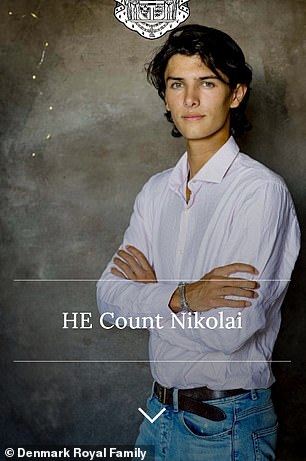 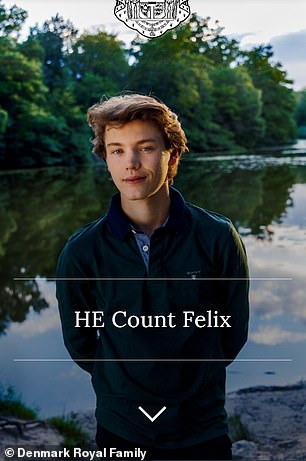 Denmark’s Royal Family has updated their website to show the new status belonging to four of Queen Margrethe’s grandchildren after they were stripped of their HRH titles. Pictured, Count Nikolai, left, and right, Count Felix 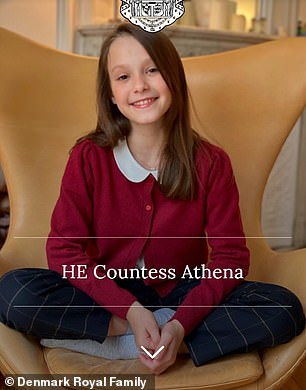 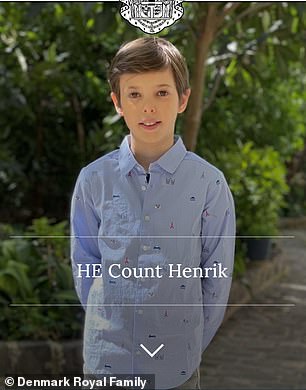 The 82-year-old monarch announced in September that the four children of her youngest son, 53-year-old Prince Joachim, would no longer be able to use the title of prince and princess after January 1. Pictured, Countess Athena, left, and right, Count Henrik

Out of a title: The four grandchildren who are no longer TRHs

Nikolai of Denmark, 23: The Copenhagen Business School student and model regularly tops lists of the world’s most eligible bachelors. He lives in Denmark but has jetted around the world to walk for designers in Paris and London. Nikolai has also appeared on the cover of Vogue Scandinavia.

Felix of Denmark, 20: Following in his brother’s footsteps, Prince Felix has also had success as a model and has starred in an advertising campaign for Georg Jensen. He had a short stint at the Royal Danish Military Academy but quit after two months because it ‘wasn’t for him’.

Henrik, 13, and Athena, 10, of Denmark: The youngest of Prince Joachim’s four children, Henrik and Athena are the product of his second marriage to Princess Marie. They live with their parents in Paris.

Under the Royal Family and Succession To The Throne pages of the website, the four young royals – who have maintained their positions in the line of succession – are mentioned with their new titles.

It was a tumultuous autumn for the Danish Royal Family after the monarch stripped Joachim’s four children of their prince and princess titles – a move which he publicly spoke out against.

But speaking in a televised New Year’s address on Saturday, Margrethe admitted: ‘That the relationship with Prince Joachim and (his wife) Princess Marie has run into difficulties hurts me.

‘Difficulties and disagreements can arise in any family, including mine. The whole country has witnessed this.’

She added that she was ‘sure that the family can enter the new year together with confidence, understanding and new courage’.

Last year, Prince Joachim publicly spoke out against his mother’s decision in the days that followed – claiming that his children had been ‘harmed’ in the process.

Months later, the sixth-in-line to the throne admitted that ‘communication was missing’ within the Royal Family in the lead-up to the shock announcement.

Joachim told local news outlet B.T.: ‘There is a lot to work on. Communication was what was missing. Now we have met and we are on the right track.’

Shortly after his children were stripped of his titles, Joachim claimed that he had only been given five days’ notice before the news was made public.

Following the Queen’s announcement, Joachim spoke to Danish publication Ekstra Bladet outside the Danish Embassy in Paris, where he lives with his French-born wife Princess Marie and his two youngest children, and said his four children had been ‘hurt’ by their grandmother’s decision.

‘I was given five days’ notice to tell them. In May, I was presented with a plan which, by and large, was that when the children each turned 25, it would happen. Now I had only five days to tell them. Athena turns 11 in January,’ he clarified

Meanwhile, his ex-wife Alexandra, 58, who was married to Joachim for 10 years until 2005, said that her sons, Nikolai and Felix, had been left feeling ‘ostracised’ from the institution and the decision had come like a ‘bolt out of the blue’.

The Royal Household released a further statement, saying: ‘As the Queen stated yesterday, the decision has been a long time coming.

‘We understand that there are many emotions at stake at the moment, but we hope that the Queen’s wish to future-proof the Royal Household will be respected.’