In her final weeks as premier, the always-cautious Gladys Berejiklian’s message was clear. “I don’t want to be a party-pooper … there’s no such day as freedom day.” For her, October 11 was a milestone, not a free-for-all.

Enter her successor Dominic Perrottet and that sentiment was thrown out the window. Perrottet has anointed himself the Freedom Premier. “It is a freedom day,” he said of Monday’s easing of restrictions. His contradiction of Berejiklian was not accidental. 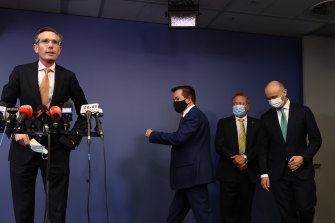 British Prime Minister Boris Johnson coined the term freedom day when he flung open the COVID floodgates on July 19. NSW was never going to be as gung-ho in undoing lockdown rules as Britain. Nevertheless, Berejiklian did not want any comparisons. Perrottet, on the other hand, threw caution to the wind. By taking a more bullish approach, he was putting his mark on NSW’s recovery.

The changes Perrottet made to the road map were fairly benign. An extra five people are allowed to visit your home, 30 rather than 20 can meet outside, and indoor pools can open now for swimming lessons and training (previously pencilled in for December 1). Schools are going back a week early.

Perrottet was not yet leader when he signalled changes would come. When he announced his candidacy for premier at a hastily called press conference two days after the fall of Berejiklian, he said he wanted to see schools return as quickly as possible. That timetable had already been moved forward once.

People joked it was because Perrottet has six kids. In reality, it was proof that he had been working on a plan and he was ready to move on it. It was tinkering around the edges, but it was significant for his leadership.

His bold approach to bringing NSW out of its COVID slumber comes with opportunities but also big political risks. On Wednesday he said the response to freedom day had been “joy and excitement”. A trip to Kmart or the hairdresser is enough to lift anyone’s spirits.

Yet the coming weeks could bring a significant spike in COVID-19 cases and a rise in hospitalisations. Berejiklian and chief health officer Kerry Chant repeatedly warned of this, as has Perrottet. But his message is clear: it’s time to move on and embrace the economic recovery.

As the Delta outbreak was taking hold in Sydney in early July, debate around whether the government moved to lock down the city early enough reached fever pitch. A leak from crisis cabinet suggested Perrottet had been staunchly opposed to shutting down the city, apparently arguing it would cause too much economic damage and it was time we learned to live with the virus.

Perrottet has repeatedly said he will not divulge what is said in cabinet (unlike some of his more loose-lipped colleagues) but that has meant he has gained a reputation, rightly or wrongly, as the anti-lockdown minister. When he held his first COVID press conference as Premier to announce NSW had reached its 70 per cent double dose target, Chant was not by Perrottet’s side. There is no doubt she would have been involved had Berejiklian not resigned. Again, it was Perrottet sending a clear signal. He was not sidelining Chant but steering the ship in the direction of his choosing.

Perrottet’s reputation has preceded him in more ways than one. His political adversaries pounced on a Facebook post of Perrottet’s after the election of Donald Trump in 2016: “If you question man-made climate change you are not a sceptic.” Along with his conservative Catholicism, his views on climate change were heavily questioned in the immediate aftermath of his elevation to the top job.

Yet, in his first major policy announcement as Premier, Perrottet has championed green hydrogen production in NSW, seen as a game-changer in the state’s ambitious targets to lower emissions. Perrottet is driven by pragmatism rather than ideology, so his natural inclination is to support industries that create jobs and grow the economy.

With a penchant for quoting lyrics from his favourite musicians, when releasing the hydrogen strategy on Wednesday, Perrottet mused: “As David Bowie said, ‘the future belongs to those who hear it coming’.”

The series of premeditated changes announced in his first week as Premier suggest he’s been living by that mantra since Berejiklian was swept up in a corruption inquiry more than a year ago. Perrottet heard the future coming and was ready for it when it arrived.