Prince Louis showed off his cycle skills on a trendy Frog balance bike in a new birthday portrait released to mark his third birthday today.

The youngest son of the Duke and Duchess of Cambridge sits on a red Tadpole Plus model, costing £200, which has no pedals or chain, as he posed for the photo at Kensington Palace.

Balance bikes are a relatively new phenomenon which has cropped up in the UK in recent years, with parents ditching the stabilisers and instead purchasing the training bicycles to help children learn balance and steering.

There are no foot pedals, chain, gears, or in most cases brakes to worry about on a balance bike, and so children are more capable of understanding how to balance themselves.

Along with claiming to help children ride actual bikes quicker, Sophie Pickles, an Early Years expert and parent coach, told FEMAIL that ‘forward-thinking’ parents like Kate and Prince William will be aware of the ‘numerous benefits of balance bikes, including the fact that it will help Louis to be a more adept writer as he starts school’.

She explained that the models help children develop muscle strength, coordination and motor skills, which in turn makes it easier for the toddlers when ‘it comes to learning to write and playing sports too’. 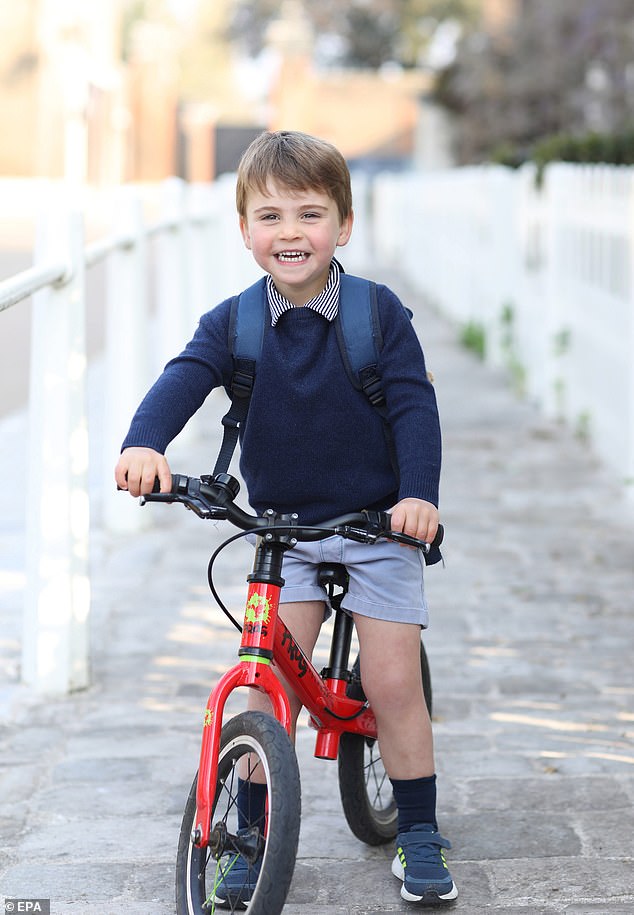 Balance bikes are generally made for small children and vary hugely in style. Prince Louis’ trendy model, which promises to ‘provide the best fit for your child’, has been out of stock for some time.

‘Do you remember your parents teaching you to ride a bike by holding on to the back of the seat while you went for your first wobbly ride without stabilisers?

‘Well, as sad as it may make you feel, the popularisation of balance bikes means that this moment between parent and child may be forever changed.

‘Balance bikes encourage children to engage their core strength and stability from the very start – something that children only really had to get to grips with after the stabilisers were taken off an old-style bike. 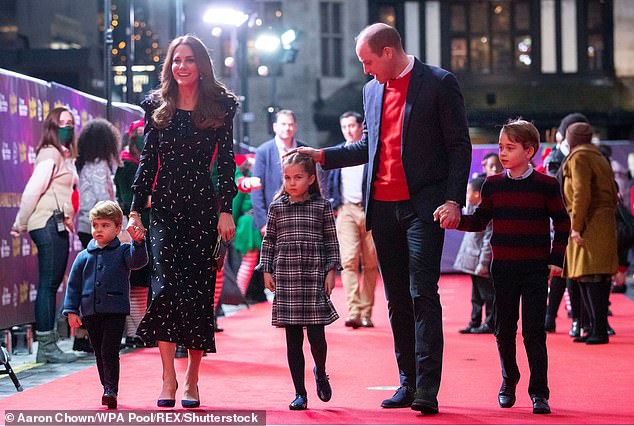 The youngest son of the Duke and Duchess of Cambridge (pictured with their children in December 2020) sits on a red Tadpole Plus model, costing £200, which has no pedals or chain, as he posed for the photo at Kensington Palace

‘This means that when they come to ride a bike with pedals, they are more confident and have better balance and control.

‘As balance bikes can be introduced from as young as two years old, this also means that the average age that children ride their first ‘proper’ bike (with pedals) will likely start to decrease too, as balance bikes for toddlers become ever more popular.’

‘Why does it matter? You may wonder why riding a balance bike really matters in the grand scheme of things, but allowing children to develop muscle strength, coordination and motor skills will do more than just helping them to learn to ride,’ insisted Sophie.

‘We know that children with these advanced skills will also perform better than their peers when it comes to learning to write and playing sports too.

‘Kate and William are known for their forward thinking parenting, especially when it comes to early childhood development, so it is unsurprising that they have made the smart choice to get a balance bike for Louis. 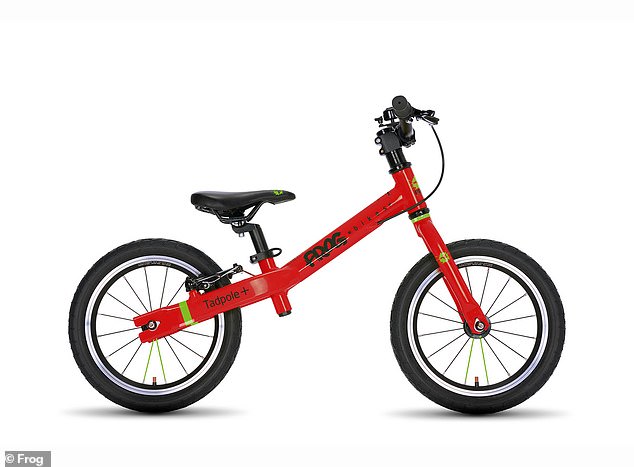 ‘Kate’s work in Early Years development for children under five means that she is probably very aware of the numerous benefits of balance bikes, including the fact that it will help Louis to be a more adept writer as he starts school.’

Emma Dines, children’s bike expert at Halfords, said: ‘It is great to see Prince Louis being introduced to cycling at such a young age and balance bikes are a perfect way to start.

‘Our figures show more customers are choosing to buy balance compared to bigger bikes with stabilisers, as they can be a much better start to a life of cycling and an easier way of mastering the essentials.

‘Learning to ride a balance bike is a really simple and natural process that kids love, and a great skill that will stay with them for the rest of their cycling lives. They promote confidence and let the child get used to the motions at their own pace.’

The brand’s description for it reads: ‘It has 12 inch wheels and is suitable for most to to four year olds. At 4kg it is very light and the range of seven colours means there is something for everyone.

‘A year or two on the Frog Tadpole means that most kids will take to their first pedal bike quickly and easily.’

Some balance bikes are more similar to toys, while others are clearly designed using features from ‘proper’ bikes. Prices start from as little as £45 onward.

While a normal bike with stabilisers might help children learn how to pedal, they don’t pick up any skills for when the stabilisers come off, according to some experts.

Balance bikes are so popular in America that the brand Posh Baby and Kids has collaborated with Bentley Motors Limited to make a designer version.

Costing $495, the ‘Bentley Balance bike embodies the same meticulous attention to detail and unmistakable design that the brand is renowned for’, according to its website.