Remember when you were a kid, and pass the parcel was one of the best party games? It didn’t matter whether it was your birthday or not – you got to unwrap a present, and just maybe there’d be a little lolly or toy car in that layer.

Behind the circle of children there’d be a couple of parents collecting the discarded newspaper (or, if you were at a very fancy party, there would be layers of actual wrapping paper from Target as well as newspaper) in a bag to put in the recycling later. 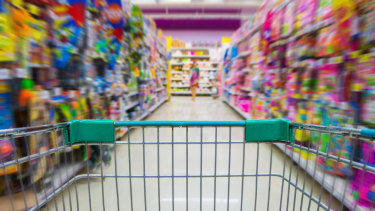 If toy companies are going to insist on imprisoning their fun toys in layers of shiny packaging, then it’s their responsibility to also reduce the harm that packaging will one day do to their target demographic.Credit:Shutterstock

Now that I’m an adult, whose job involves receiving a lot of tech products and kids toys, every day is like playing pass the parcel. Only I don’t have to hand it off to anyone, it’s not wrapped in newspaper, and instead of joy and excitement building with each layer, it’s just abject horror at what we’re doing to the planet.

Toys are the worst offenders. Layer upon layer of plastic wrap over a plastic container (which they claim you can put jewellery in, but no one ever will), covering a tiny plastic toy which will be lost or forgotten about an hour later.

What makes this particularly cruel is that kids are the ones who are going to be affected the most by climate change and general pollution. We’ll get to live to relatively ripe old ages, and still remember when we had turtles. Little kids won’t be so lucky if we keep going the way we’re going.

Trends in packaging have changed a lot since I was a child, though not as dramatically as since my parents were children. Back in their day, toys were just on shelves, or maybe in a cardboard box with a window. In the 90s, we had a bit more packaging, more plastic blister packets for parents to cut their fingers on.

What makes this particularly cruel is that kids are the ones who are going to be affected the most by climate change and general pollution.

But in 2019, unboxing YouTube channels and “surprise mechanics” (read: gambling) of blind bags (selections of collectibles, where children don't know which they have received until they open the package) are what’s driving toy sales far more than the Saturday morning cartoons of yore. Now every child needs to be able to unwrap multiple layers for their own ridiculous unboxing experience, or they need to buy ten unnecessary blind bags just to get the one toy they want.

It gets worse when sometimes the packaging is all there is to the toy, such as those big plastic eggs filled with individually wrapped bits of eventual trash which children love and parents are confused by.

And that’s not to mention the larger toys, which may as well have been welded to the packaging using the metal Captain America’s shield is made out of. Making it impossible to part the toy from the excess, wasted packaging is just adding insult to (both literal and figurative) injury.

This would be a little better if the packaging was at least recyclable at home, but it’s not. It’s mostly soft plastics, or plastic that’s too small to go through the recycling process.

Although soft plastics can’t go in the home recycling bin, they can be collected and dropped off in the bins at select Coles and Woolies stores, which is how I reconcile the extreme waste of my Lego addiction. But busy parents just don’t have the time to be collecting every piece of soft plastic their kids accumulate.

And parents are not to blame for giving into their children’s demands for the toys they see their friends and YouTube influencers playing with. There’s only so much no you can say to a toddler before their giant eyes make you feel like a war criminal, or their tantrums become too much.

If toy companies are going to insist on imprisoning their fun toys in layers of shiny packaging, then it’s their responsibility to also reduce the harm that packaging will one day do to their target demographic.

Make the packaging compostable, or at least biodegradable, and do the same with the Shopkins collectables or LOL dolls. Don’t give a three-year-old the choice between a lump of plastic that looks like chips, or a healthy ocean. They don’t fully understand what an ocean is, and those chips look like they will be fun to sell in an imaginary shop.