In what looked like a scene out of a Hollywood sci-fi movie, the huge shelf cloud can be seen looming over the New Mexico region of Clovis.

This will only have added to the ominous atmosphere, given that New Mexico is also home to Roswell – the location of one of the most famous UFO theories in history.

Part of what made the spectacle so breath-taking to look at was the contrast in colour.

Ahead of the cloud, the sky is overcast with a dark, eerie blue. But behind the cloud formation towards the distant horizon, the sun creates a hellish and fiery glow.

An intense lightning storm also appeared to be going on somewhere underneath the cloud, interspersing the scene with flashes of white every couple of seconds.

Christian J Hernandez, who shot the footage, compared the cloud to a “mothership” – often depicted in sci-fi movies as the largest alien spaceship in a fleet.

The phenomenon has been identified as a shelf cloud, about which UK-based Weather Online states: “The shelf cloud is a low-level horizontal arcus-type accessory cloud that appears to be wedge-shaped as it approaches.

“It is usually attached to the thunderstorm base and forms along the gust front.

“The underside is concave upward, turbulent, boiling, or wind-torn. Tornadoes rarely occur with the shelf cloud.”

According to Weather.com, shelf clouds develop at the boundary between an updraft and a downdraft. 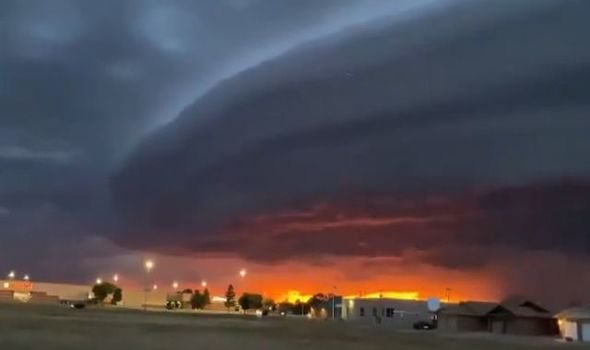 Cold, rain-chilled air will descend during a thunderstorm downdraft, while warmer, moist air will rise at its leading edge.

As a shelf cloud passes overhead, people may experience a sudden change in wind direction, and there may be more wind generally.

Shortly afterwards, heavy rain or hail can follow. Once the shelf cloud has passed, gusts of wind may be strong enough to cause downed trees or power cuts.

Meanwhile, the UK is set for somewhat less spectacular weather this week after last week’s wall-to-wall sunshine and record heat.

DON’T MISS:
Astronomers spot blast of light from black holes for first time [INSIGHT]
How space travel could give the future of cryptocurrency a boost [REPORT]
Yellowstone boosts jobs as tourists spend half a billion on visits to national park [STATISTICS] 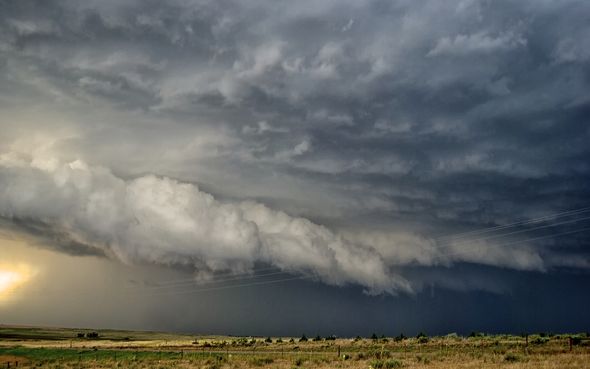 While the last couple of days have been relatively cool and cloudy, things are due to start warming up again as the week goes on.

However, while the temperature may be climbing, the week is still due to be a relatively showery one.

Today, Tuesday, will see occasional spots of rain across many parts of the UK interspersed with some bits of brightness. In Scotland, rainfall may be heavier. 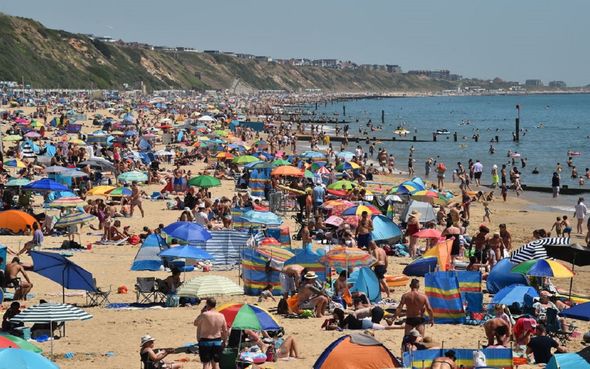 Wednesday will see scattered showers continue across some of Northern Ireland, the north of England, and the south of Scotland.

From Thursday to Saturday it is likely to be much the same, with rain perhaps getting a little heavier through Friday for northern areas.

Towards the end of the weekend, though, the Met Office says that generally things will get drier and less cloudy.