The Victorian opposition quietly promised the Australian Christian Lobby and other faith groups that it would amend new laws banning gay conversion therapy if it won next year’s state election.

Then-opposition leader Michael O’Brien committed to wind back elements of the laws if he won the November 2022 election, in a bid to secure the votes of religious conservatives who rallied against the Victorian government criminalising attempts to suppress or change an LGBTI person’s gender or sexuality, including through faith. 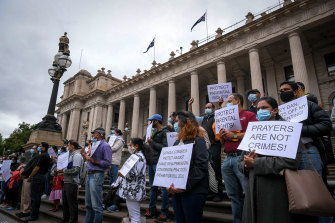 Protesters against the government’s gay conversion therapy legislation on the steps of Parliament House during the debate earlier this year. Credit:Eddie Jim

Newly-elected Opposition Leader Matthew Guy refused to say whether he would take a different position to Mr O’Brien, claiming he had not yet had enough time to consider his predecessor’s decision, which was discussed in the party room.

As part of his media blitz after toppling Mr O’Brien, Mr Guy was interviewed by LGBTQI radio station JOY 94.9FM where he said he wanted the LGBTQI community to talk to him about issues affecting them.

While it is not clear exactly how the Coalition planned to alter the laws, it had previously raised concerns about the rights of children and parents seeking assistance with gender dysphoria and sexual identity issues and the rights of religious and medical practitioners providing that care.

During the parliamentary debate, the opposition said it supported outlawing “barbaric, antiquated conversion practices” but attempted to delay the bill on the grounds that urgent stakeholder consultation was required.

At an Australian Christian Lobby event in Hobart on September 4, managing director Martyn Iles told the packed room that Victoria’s opposition had given him a “written statement” saying that if elected in November next year, the Coalition would “roll back” the contentious legislation, according to a source who attended the event.

“Security was really strict, and we weren’t allowed to record or take notes,” the source told The Age.

The Australian Christian Lobby has been contacted for comment.

The Change and Suppression (Conversion) Practices legislation, which passed Parliament in February, is one of a series of contentious progressive social reforms introduced under the Andrews government that have drawn the ire of religious groups.

Faith groups branded the “world leading” legislation the biggest threat to religious freedom in years because it prohibits “prayer-based practices”.

Under the laws, anyone found trying to suppress or change another person’s sexuality or gender identity faces up to 10 years’ jail or fines of almost $10,000 if it can be proved beyond reasonable doubt that their actions caused serious injury.

The Family Violence Protection Act has also been amended to clarify that suppressing or changing a family member’s sexuality or gender identity is a form of domestic violence, empowering people to take action against their relatives.

There was criticism of the bill’s reference to prayer, including from mainstream churches, with Melbourne’s Catholic Archbishop Peter Comensoli telling The Sunday Age: “Who I pray to, how I pray, what I pray for, and most particularly, who I pray with is not of concern to any government.”

“Most mainstream Christian churches reject coercive practices or activities that do harm to LGBT people and we’re ready to work with government to find ways of ensuring that people are protected. But the bill goes well and truly beyond that,” the Archbishop said last year.

The bill passed the upper house with the opposition voting with the government, although two conservative Liberal MPs, Bernie Finn and Bev McArthur, voted against it.

“We have a number of concerns with the bill. But we again reiterate our strong support to outlaw barbaric, antiquated conversion practices, and on that basis we will not oppose the passage of this legislation,” former shadow attorney-general Edward O’Donohue said at the time. 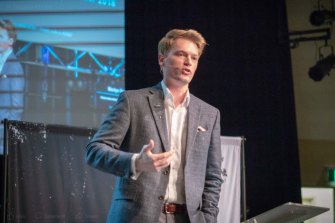 The debate earlier this year deepened a rift in the Liberal Party, which has been attempting to straddle its conservative and progressive voters. Conservative MPs said they feared losing support from their branch members, while former federal Liberal vice-president and influential party figure Karina Okotel emailed all Liberal MPs suggesting it should be legal for people to attend prayer groups to reverse their sexuality but illegal for extreme medical measures such as shock therapy to be used to achieve the same ends.

The decision was difficult for the party which values religious freedom but whose MPs were on the record saying they do not agree with gay conversion therapy.

Victoria’s legislation went significantly further than a similar law passed last year in Queensland, which covers only health settings such as counselling, psychotherapy, or support groups referred by healthcare practitioners.

In an extract of the two-hour Australian Christian Lobby event at Hobart posted on its Facebook page, Mr Iles said the most troubling aspect of Victoria’s laws that criminalise gay conversion therapy is that it “reaches into the family home”.

”There’s a number of campaigns around the country at the moment to pass these laws … and they call them gay conversion therapy laws, and of course the reason that you might do that is because it becomes very hard to speak about them and critique them, because if you’re seen to be in favour of conversion therapy, you’re a very evil individual,” Mr Iles said.

“But of course, here’s the thing: conversion therapy of the kind that is conjured up in the mind of the average Australian – coercion, abuse, electric shocks – I mean, hello, it’s not happening here in Australia today. ”

Many conversion practices – from celibacy support groups aiming to overcome same-sex attraction, to exorcisms and attempts to “pray away the gay” – are often hidden in informal and religious settings, as opposed to extreme medical interventions that were sometimes previously used, such as shock treatment or aversion therapy.