Six cruise ships off the coast of NSW have been ordered to leave Australian waters amid the coronavirus pandemic but NSW Police Commissioner Mick Fuller has accused them of lingering and delaying departure.

Mr Fuller said he was was in constant contact with federal authorities about how to move them on, warning "NSW is not a safe haven for every cruise ship". 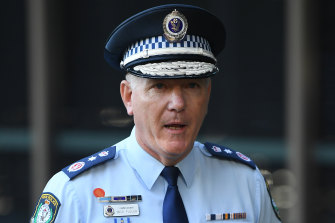 NSW Police Commissioner Mick Fuller speaks to the media during a press conference on Tuesday.Credit:AAP

He said he would have an urgent phone hook-up on Tuesday with Home Affairs Minister Peter Dutton, Australian Border Force Commissioner Michael Outram and NSW Police Minister David Elliott to "put more pressure on them to go".

There are now 2032 coronavirus cases in NSW, with 114 new cases identified overnight but NSW Premier Gladys Berejiklian said people had to remain vigilant despite a small drop in numbers.

Ms Berejiklian says sweeping new powers to stop people leaving their home without a reasonable excuse would help to slow the spread of coronavirus but community transmission remained a threat.

A pop-up COVID-19 testing clinic will open in Bondi and GPs in Sydney's eastern suburbs have been urged to ramp up testing amid concerns over increasing community transmission in hotspots. 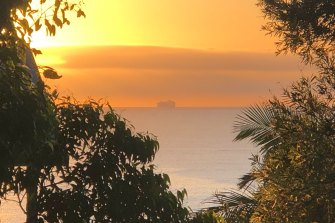 The Ruby Princess floating off Copacabana on the Central Coast as the sun rose on Tuesday morning.Credit:Harriet Alexander

NSW Chief Health Officer Dr Kerry Chant said the drop in numbers comes as fewer tests were being done. There are 164 people in hospital, including 35 in ICU, with 16 on ventilators.

The Premier warned against being too hopeful that NSW had turned a corner.

"Remain vigilant, do not look at the case numbers each day…this is serious, we are at a serious stage of the virus," Ms Berejiklian said. 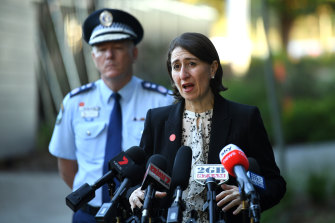 "Do not gather more than two people outside or inside your home. This is important because we know the number of cases is increasing," Ms Berejiklian said.

"We know NSW has taken every strict measure we can.

Mr Fuller said 13 people had been fined for flouting social distancing rules but that did not mean people could not leave home for important reasons.

"If you need to exercise, we get it. If you need to go to the shops to get some food, absolutely acceptable. But the messaging has not been getting through to some people," Mr Fuller said. 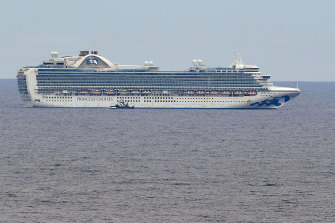 The Ruby Princess cruise ship in waters off Sydney on Monday,.Credit:AAP

Dr Chant said there would be extra testing in various hot spots, including a pop-up site in Bondi as well as working with local GPs.

"There has been an outbreak in backpackers," Dr Chant said.

She said there needed to be extra testing where there is clear community transmission and areas of "active clusters".

"I am urging increased testing," she said

Dr Chant also expressed concern about "the weekend effect", where there maybe a decline in cases because people were less likely to present for testing on the weekend, when many GPs are shut.

"I suppose I'm just very cautious in interpreting the numbers because I know that whenever I interpret a number, it has to be interpreted in the context of the testing rates," she said. "But I'm urging increased testing and particularly aligned to active clusters and community transmission."

Meanwhile, two pregnant women and four people with coronavirus symptoms are among the crew who have been allowed to disembark ships off the state's coast, Mr Fuller said.

The state was "receiving people sensibly back into NSW" and prioritising taking Australian crew members off the ships, Mr Fuller added.

"Four Australians who are crew members have been taken off one of those nine ships," he said

"We've had requests for two ladies to leave two different ships who were pregnant, which I thought was absolutely appropriate. We've had four individuals come off with symptoms of the coronavirus and one who had another medical episode."

On Monday, it was reported that three crew members were taken off the Ruby Princess and taken to hospital.

03/31/2020 Lifestyle Comments Off on ‘NSW is not a safe haven for every cruise ship’: Police Commissioner orders vessels to leave
Recent Posts
We and our partners use cookies on this site to improve our service, perform analytics, personalize advertising, measure advertising performance, and remember website preferences.Ok