Who discovered the helical structure of DNA? Crick and Watson, as every trivia night nerd knows. Their colleague Dr Rosalind Franklin did not become a household name in the same way: the trailblazing chemist and X-ray crystallographer died of ovarian cancer at the age of 37 and sadly did not share the Nobel Prize, despite playing a crucial role in the race to unlock the secrets of life.

Whether Franklin’s untimely death, or the endemic sexism she faced while alive, was responsible for her erasure is a matter of enduring controversy. What isn’t in dispute is her intellect, tenacity and dedication to science. 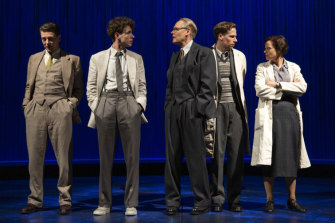 Anna Ziegler’s Photograph 51 is a dramatic, meticulously researched account of the mission to understand DNA that places Franklin, an unsung hero of 20th-century science, centre stage.

Universities, and particularly physics departments, were unused to women in the 1950s. When Franklin (Nadine Garner) is lured from Paris to London’s King College, she expects her own lab, and is offended when a crossed wire leads her colleague Maurice Wilkins (Paul Goddard) to treat her as an assistant.

Friction between Franklin and Wilkins dogs their research, with PhD student Ray Gosling (Gig Clarke) comically sandwiched in the middle. The personality clash becomes a liability when Francis Crick (Dan Spielman) and James Watson (Nicholas Denton) enter the race to decode the delicate structure and workings of the DNA molecule. 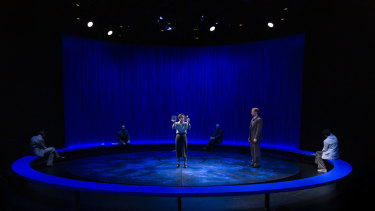 The latter pair’s casual sexism is an obstacle to knowledge, too. They spend most of a lecture Franklin gives commenting on her appearance rather than listening, and as a result their initial model of DNA structure is wrong.

The breakthrough they’ve been looking for comes when Wilkins (without Franklin’s knowledge) shows them her closely guarded research, the famous “Photo 51”, which provides the only evidence for a new, and correct, theory of how DNA works.

Ziegler has created a gift of a role, and Nadine Garner’s performance delivers a wonderfully spiky, intellectually self-possessed Franklin, whose mordant wit, accomplishment and determination slice through the gaggle of male colleagues intimidated by (or infatuated with) her. 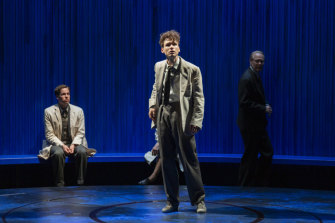 The male actors tag-team the storytelling, playing men of their time with precise, rather than caricatured, frailties: Denton’s irrepressibly boyish, wild-haired Watson and Spielman’s more seasoned and worldly Crick; Goddard’s peevish and perhaps lovelorn Wilkins, and Yalin Ozucelik as doctoral student Caspar, a kindred spirit to Franklin, who admires her genius from afar.

Pamela Rabe’s production – on a circular stage, a bit like a centrifuge – is intimate and involving. It generates the tension and pace of the quest for discovery, plenty of understated comedy and poignant detail, while keeping quiet focus on the forces that militated against Franklin receiving the acknowledgment she deserved.

The erasure of women from history is encapsulated in one recurring, Shakespearean motif. Wilkins and Franklin almost meet at a production of The Winter’s Tale, where everyone remembers Sir John Gielgud as Leontes, but the actor playing Hermione is forgotten.

In Shakespeare’s play, Hermione, killed by male rage, is resurrected from the dead. Ziegler’s Dr Franklin offers the telling interpretation that, in truth, Hermione did die, and her resurrection is a fantasy to allow her husband’s crimes against her to be forgiven.

Likewise, the onstage resurrection in Photograph 51 constitutes an apology to a brilliant woman of science who deserved greater recognition, and a happier ending.

Related posts:
11/11/2019 Lifestyle Comments Off on MTC’s Photograph 51 captures a forgotten hero of science
Recent Posts
We and our partners use cookies on this site to improve our service, perform analytics, personalize advertising, measure advertising performance, and remember website preferences.Ok