From our lounge room, we click on the link to the live stream of our daughter’s Year 12 valedictory evening. On Friday most restrictions on indoor gatherings were lifted. But tonight is only Thursday; we’re one day too early to witness the milestone in person. Just as a cohort of children was born two years too early or, alternatively, two years too late, to avoid a once-in-a-century event obliterating rites of passage.

At least tonight only parents are remote; the graduating students legally assemble in the school auditorium. Huge mercies. 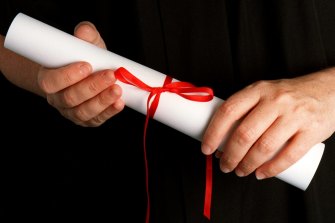 After the interruptions of lockdown, the graduating students were able to gather in the school hall.Credit:Virginia Star

Is it real, though? Is my firstborn really passing the threshold of adulthood? Because for now, I’m on the couch in front of the box like it’s a regular Netflix night. Except I cannot rewind the narrative: the 14 days swotting for exams, the six years of high school, the seven years of primary school, the 18 years of officially designated childhood going back to the moment the obstetrician gifted a moist bundle into my arms, and in an instant made me complete – all this is played, and dusted.

So from the lounge room we watch the acknowledgment of country. The school captains’ speeches, each one a cheerful variation on “we did it!” The presentations of the Australian Defence Force Future Innovators Award and Long Tan Leadership Award. 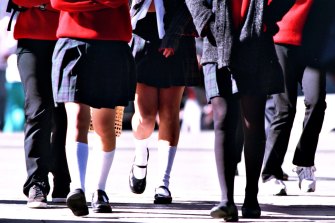 Is my first born really passing the threshold of adulthood?

A high school alumnus speaks. She does not speak about becoming a flying doctor, a start-up whizz or pop star. Throughout childhood her one goal was to be a dancer, she explains. Lunchtimes, weekends and holidays were spent in the dance studio. She was accepted into dance school before her Year 12 exams were even complete.

Then some way into her course she found herself physically and emotionally exhausted, and feared she would come to hate what she’d once loved. She made what seemed a momentous decision, pulled out of dance school and pursued a bachelor of nutrition science. Towards the end of that degree she again had doubts about her career path, enrolled in a masters of primary teaching and reckons she’s found her passion.

“Everyone is on their own journey,” she says. The lessons in resilience learned during the pandemic, with its unexpected turns, will stand you in good stead for life, she tells the graduates.

The principal’s speech quotes Martin Luther King Jr and Confucius, but even she would admit to being up-staged by the international students representative.

“Being an international student is hard, let me tell you,” the student starts. Studying is hard enough in one’s language, she says, let alone a foreign one.

“I could not prove using vectors if I don’t know what the rhombus looks like or know the ‘intention of the author’ if I don’t even know what the book is about, or compare the melting point of two compounds when I even don’t understand what polar and non-polar means.”

“Finally, I want to give serious thanks to my parents in Vietnam … who are watching through a phone screen. It’s been two years since the last time I met my father” – her voice breaks –“because of the pandemic,” she says.

“The system between two countries stopped me and him from hugging each other … Despite the difficulties my parents are always my strongest companions … sacrificing their time and happiness to earn money so I can receive the best education.

“Since my parents do not fully understand English, allow me to say some words to them in Vietnamese …”

As she tearfully relays those words to her absent parents, the rest of us are gone. Gone in my lounge room, gone – I later learn – in the school auditorium. And I’m still sobbing uncontrollably as awards are given to students who worked on the school musical that never saw the light of day, as a duo of girls sweetly sing “I Say A Little Prayer,” as a lad performs a virtuoso piano solo of Doctor Gradus ad Parnassum from Claude Debussy’s, Children’s Corner suite, in the modest auditorium of this unremarkable public school.

And when the event concludes we pick up our daughter and gather with half a dozen other Year 12 families and their children at the nearby Greek tavern, where the owners lay on the banquet and the love. “I tell you, the last months, we’ve just been hanging on,” says Perry of the decades-old local.

And not all the families know each other, but it doesn’t matter because we’re wearing our hearts on our sleeves because our children are wearing their uniforms for the last time. “It doesn’t seem real,” we say to each other, in trembly voices. And we talk about summer plans and our children’s plans – one girl wants to be a midwife.

And we cut a cake, and our children blow out candles to officially mark day one of the rest of their lives, and we might have started smashing plates, but even Perry – “we’re all socialists in this family” – has his limits. “We’re closing,” he laughs, and it seems like a lifetime since I last lingered at a venue till closing.

And into the night we go, into the future we stumble, mourning and celebrating the passage of time, knowing that in a few hours Melbourne will spring more vividly back to life, as if born afresh.

Most Viewed in Lifestyle

11/23/2021 Lifestyle Comments Off on Mourning, celebrating the passage of time, my first born graduates
Recent Posts