A woman has shared how a surgeon removed 850g of excess weight from her breasts after undergoing a reduction – where she once felt ‘trapped’ in her own body.

Boudicca Langer-Hann, 40, an events manager from Dorset, England, started noticing that her breasts were larger than her friends as a teenager and felt that they never suited her.

Over the years, she became ‘disappointed’ in herself for never feeling confident and soon, she started receiving unwanted comments, as well as feeling ‘trapped’ in her own body.

As she believes that large breasts are deemed to look ‘sexy’ she was worried about how others may perceive her.

After giving birth to her first child in August 2021, she booked a £6,849 procedure and went from a 34G cup size, to 30C breasts and claims that 450g of weight was removed from one breast alone.

Boudicca Langer-Hann, 40, an events manager from Dorset, England, felt her large breasts never suited her, left. She went from a 34G cup to a 30C cup thanks to breast reduction surgery, right 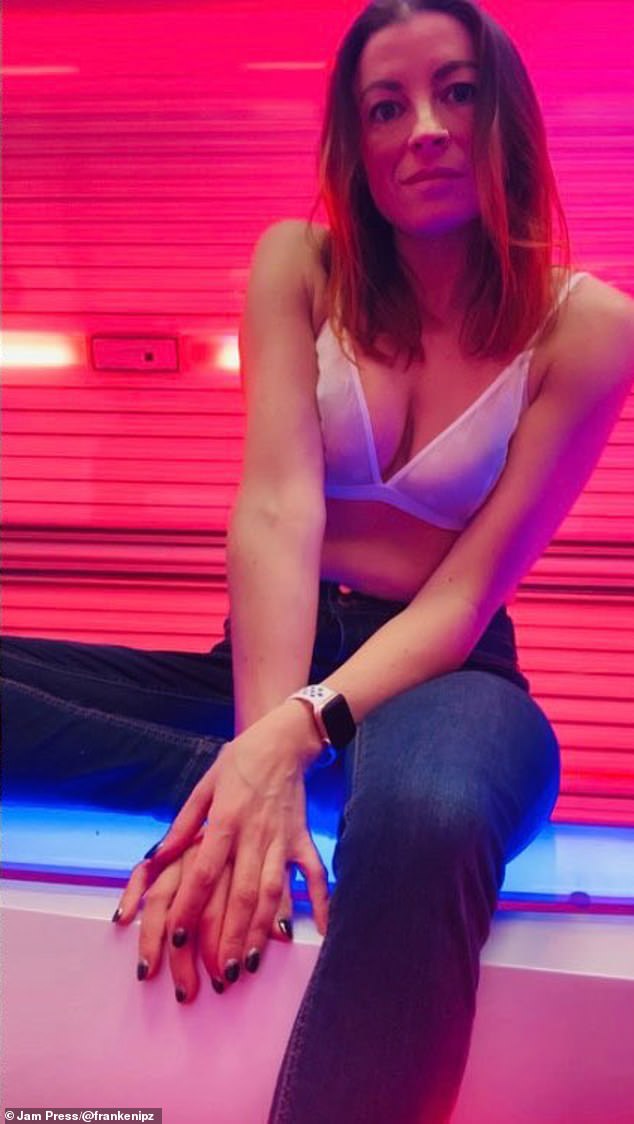 Boudicca claims that 450g of weight was removed from one breast alone when she had the reduction, pictured now

She recalls having dreams of being a dancer or model growing up, where she loved being active.

‘I felt trapped in my own body, as I never thought they suited me,’ Boudicca said.

‘I was casually called ‘boobs’ quite a lot, even by close friends and that always made me feel hurt.

‘I received a lot of sexual attention as if I wanted it and it seemed like people assumed I’d be ‘up for it’ being so ‘sexy’ [due to my boobs]. 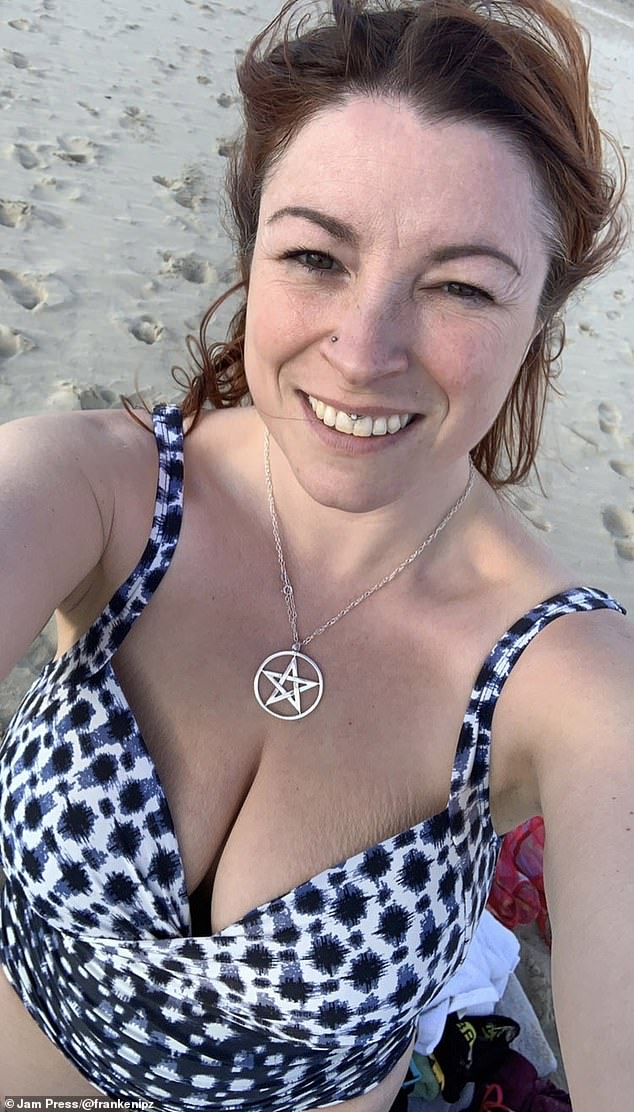 The mother-of-two, pictured before, felt trapped in her own body due to her last bust, and said she enquired about breast reduction surgery when she was 33 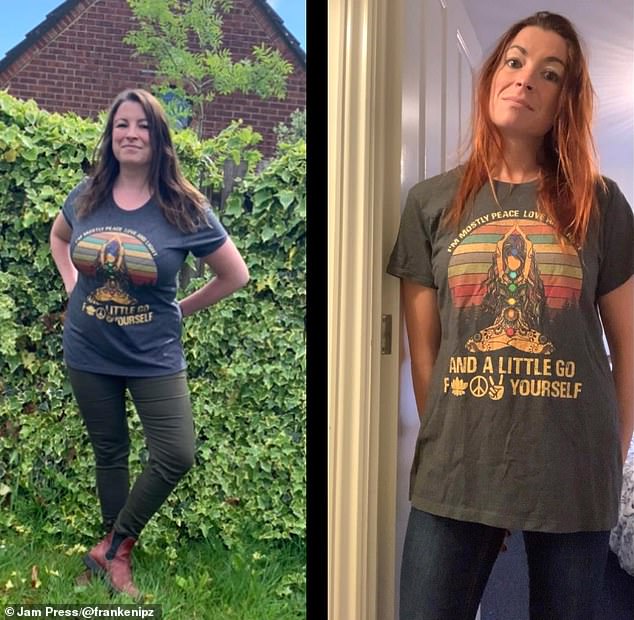 Boudicca said she received a lot of unwanted attention because of her breasts, left, but now can finally be who she wanted to be since the reduction, right

‘I still find it astounding how anyone thinks there is any place to comment on someone’s body.

‘I developed late and was happy being a “little pixie girl” – and I wanted to be a gymnast, but my body didn’t want that for me.

‘My mental health was terrible and I was convinced I was really fat.

‘I got bigger and bigger in clothes size especially after having children – I was a mess, depressed and felt like I couldn’t do anything about it.

‘I felt that no one should love me, I could not love myself.’ 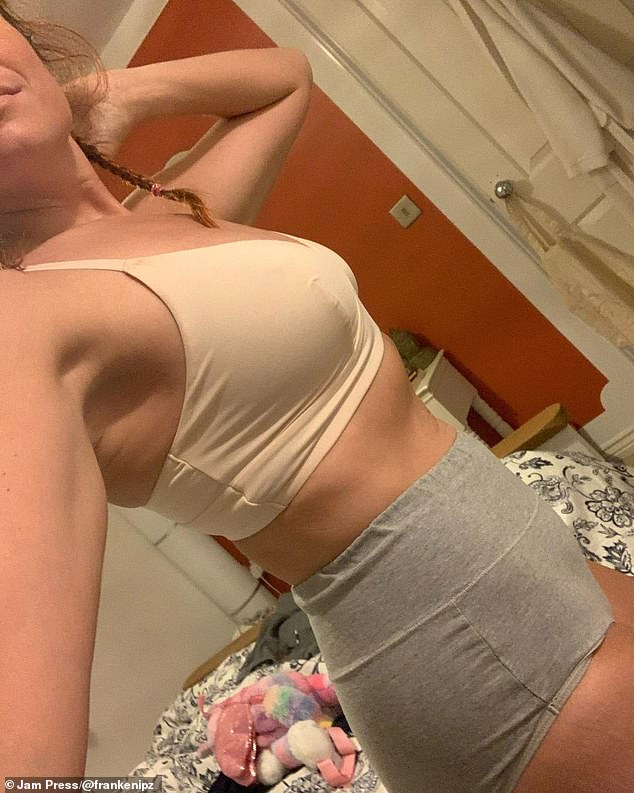 The mother-of-two showing her figure after the reduction. She admitted she struggled to love herself before 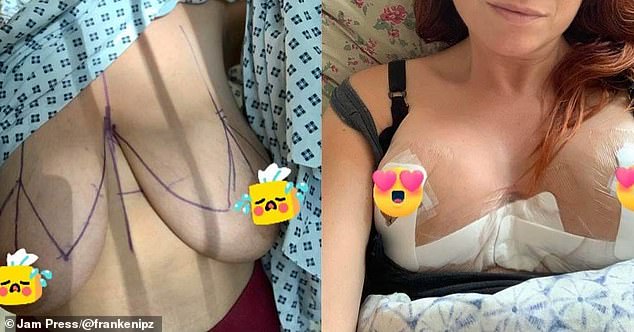 The mother-of-two’s bust before and after her breast reduction surgery. She said she was a bit afraid of going through the procedure, but was determined to go through with it

At 33-years-old, she booked in for a consultation to have a breast reduction and was told to wait in case she wanted any more children.

The mother-of-one recalls reluctantly agreeing, as she believes there’s benefits of having ‘natural’ breasts while breastfeeding.

After having her second child, the first thing on her mind was having a breast reduction – which she booked in for August 2021, costing £6,849.

She said: ‘I decided this was a one-in-a-lifetime opportunity and I should go for it.

‘Mr Sawyer, my surgeon, let me decide if I wanted to go for a D or C [cup size] and on the day of my operation, I opted for a C.’ 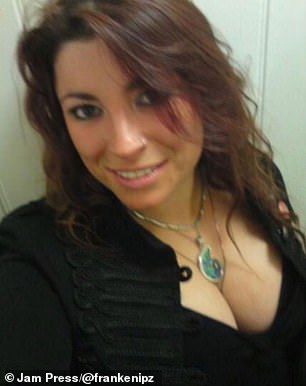 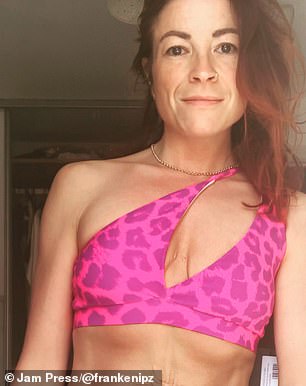 The mother-of-two was anxious that people would look at her a certain way due to her bust, left, and feels freer now, right

However, the recovery process didn’t go as thought and soon, she started experiencing issues.

Boudicca added: ‘I was spaced out and not with it for a while.

‘I felt mashed as I didn’t react well to the morphine.

‘When you’re all cut up and it’s right in front of you, it’s very difficult to imagine that you will heal. 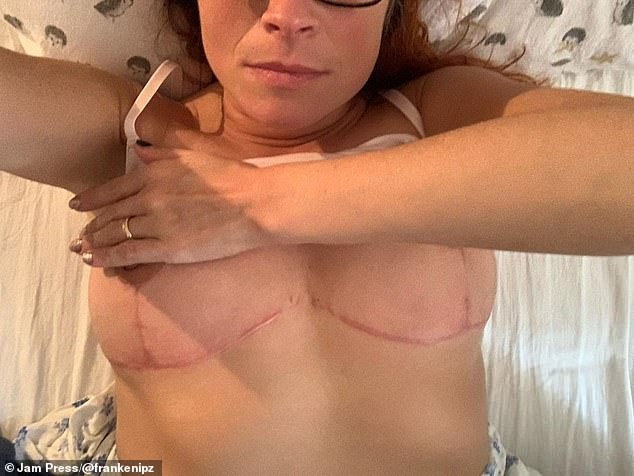 The healing process took a long time, and Boudicca admitted she was left feeling upset and anxious (pictured before, left and after, right)

‘There were a couple of days right after, where I got a bit upset and anxious over feeling [this way].’

After a lengthy healing process, she’s now taken up running four times a week and says she’s able to do more now than ever before.

She said: ‘I am more active with my children, I have more confidence and I even jump up in the mornings.

‘I love being active as it really suits me and makes me happy – I smile so much more and I’m never going to get over it.

‘I know it’s commonly said by women who have had this procedure but, I wish I had done it sooner.’

Sharing her journey on her Instagram, she hopes to provide an insight for her followers.

Boudicca added: ‘I was looking for answers on the internet and found a lot of comfort in the posts on Instagram from other women.

I’ felt I should account [my journey] too and I’m so pleased that I did. 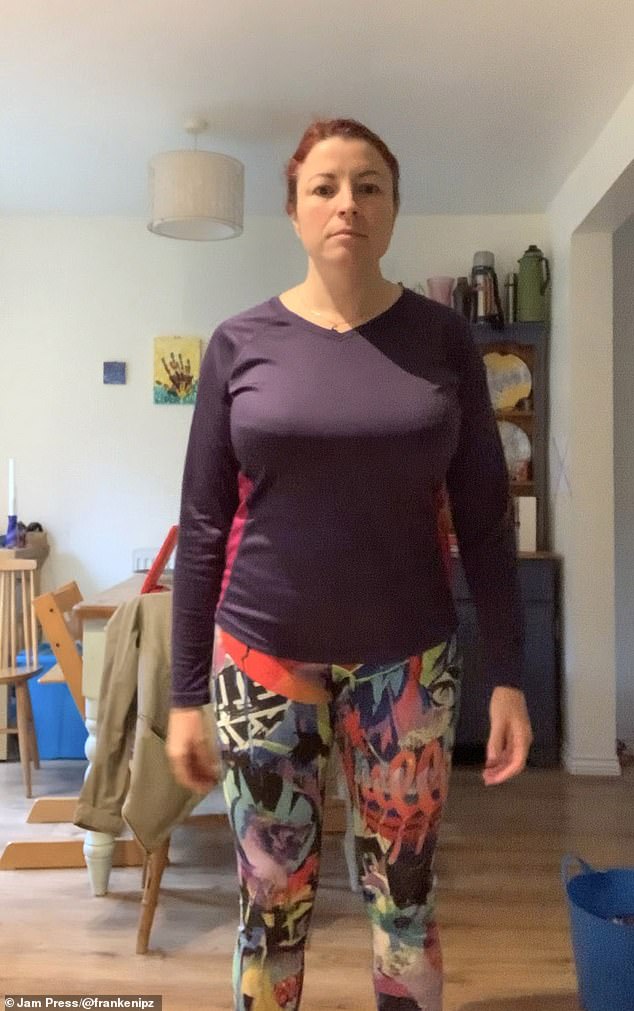 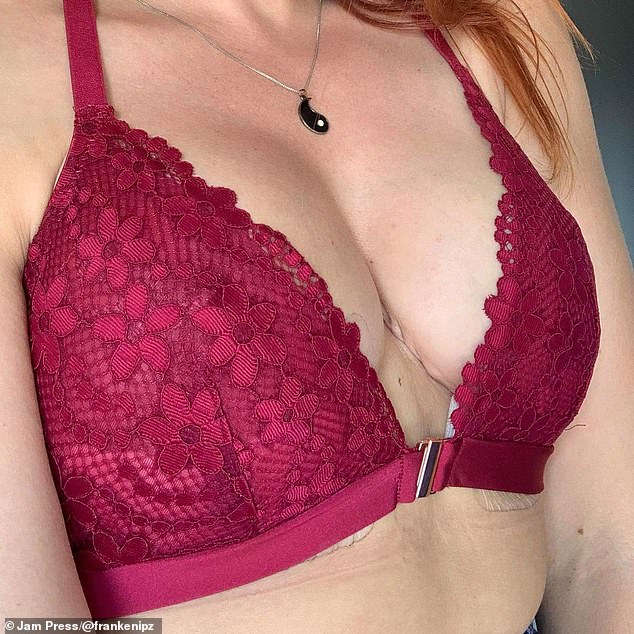 A look at Boudicca’s cleavage after the operation. The mother-of-two said she would have liked to have done the surgery sooner 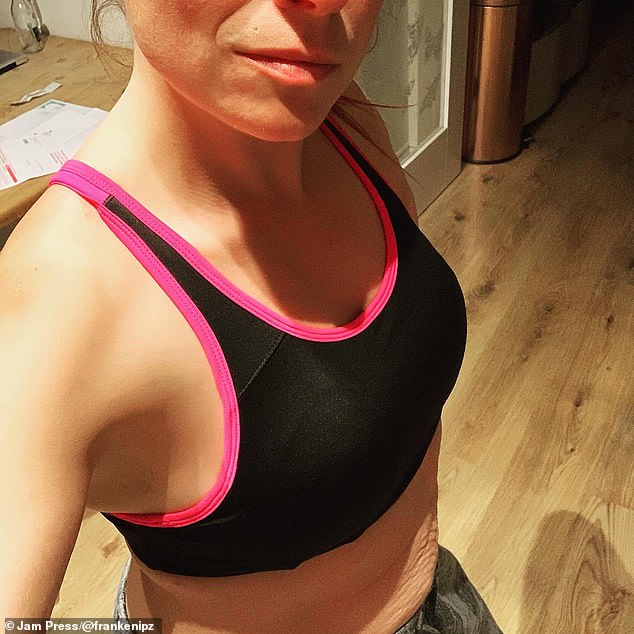 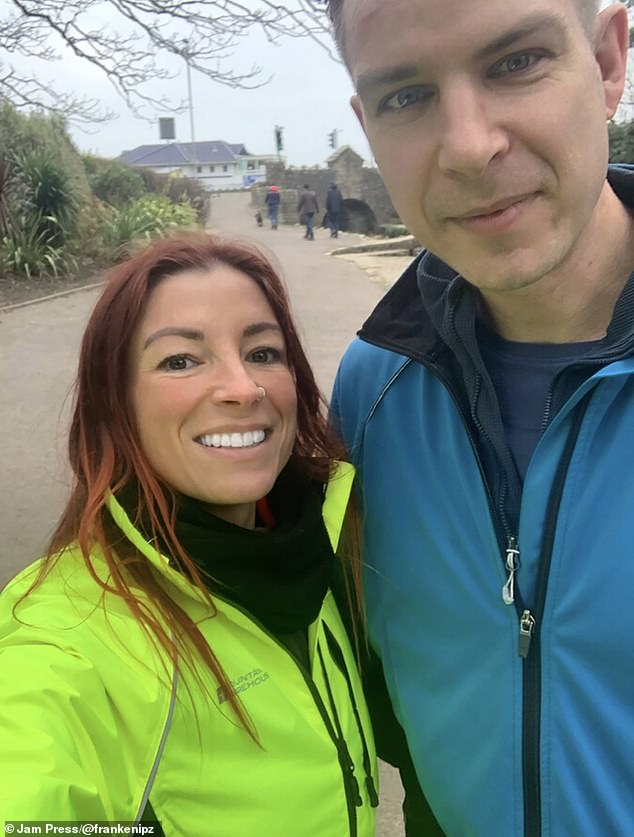 Boudicca and her husband. The mother-of-two admitted she experienced issues during her recovery

‘I’ve answered many questions from women who have been considering it or have surgeries coming up.

‘It’s normal to be afraid, as it is such a big deal and a really emotional one too.

‘But ultimately it is so worth it – so please push through the fear and shortly after, you will be living your new and improved life.

‘Go on websites and research different surgeons – if you come across a surgeon without a review online, probably best to stay away.

‘Go to several consultations as you are spending a heap of money and you absolutely should shop around to see what’s best for you.

‘One of my best moments post op, was buttoning up a jacket all the way to the top – sensational.’