The truth behind my ‘perfect’ photos: Mother-of-two, 34, known for her bright and happy Instagram feed reveals the shocking struggles she and her family are facing behind the scenes

Stephanie Hanrahan is known for her picture perfect social media feed where she is regularly seen all-smiles alongside her husband of seven years, Shawn, and their two children Campbell and Eli.

But the mother, from Texas, was recently inspired to reveal the truth behind her photos after reading countless comments from followers about her ‘perfect family’.

‘No one could’ve known I was reading those comments with a pit in my throat, probably from the comfort of my bed, the one I refused to leave even for meals,’ Stephanie, 34, wrote on her website Tinkles Her Pants.

‘It would be impossible to predict that behind closed doors I was crumbling; a woman on the verge of a mental break. One who had spent the last few years trying to save that very same “perfect” family.’ 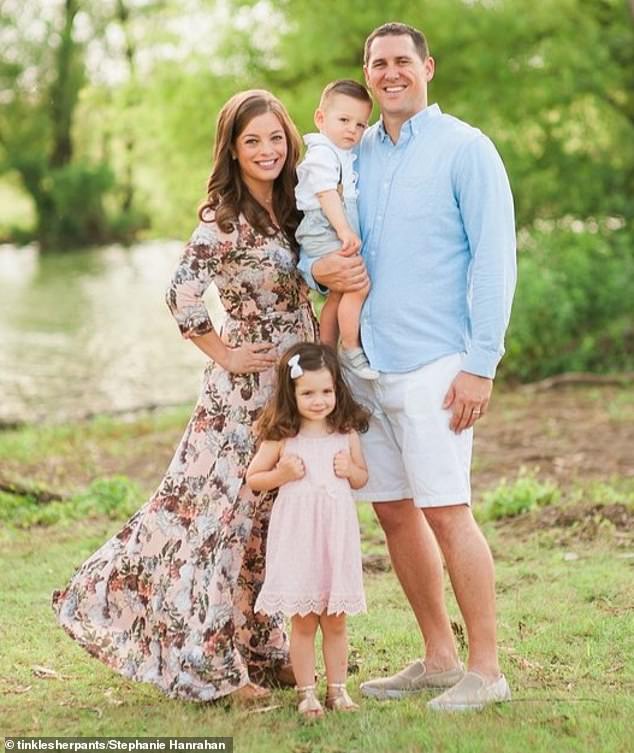 Stephanie Hanrahan (left) is known for her picture perfect social media feed where she is regularly seen all-smiles alongside her husband of seven years, Shawn, (right) and their two children Campbell (front) and Eli (back) 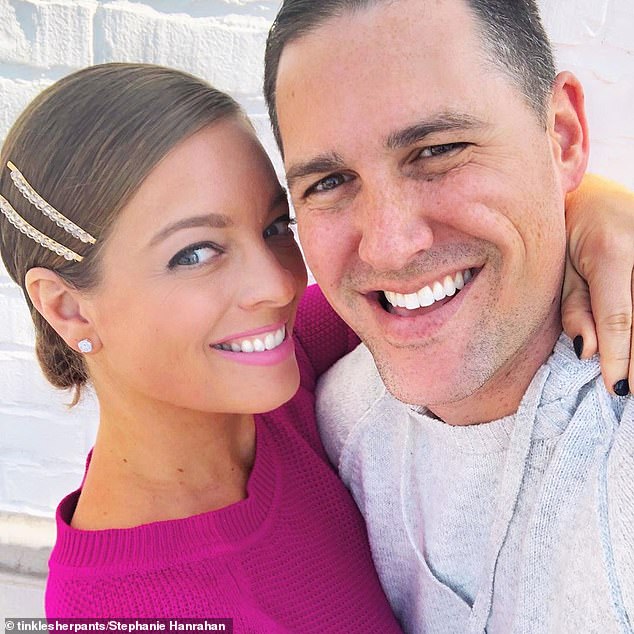 Behind the smiles, the coiffed hair and colour coordinated outfits was a woman going through many struggles, including supporting her very unwell husband

Behind the smiles, the coiffed hair and colour coordinated outfits was a woman going through many struggles, including supporting her very unwell husband.

‘He’s traditionally handsome and hardworking. A provider, a sacrificial and serving man. He doesn’t always have a lot to say (which drives me to drink), but I suppose it works well for us since I’ve been given the gift of gab,’ she said.

‘He’s a former athlete in his early thirties, and on any given day if you saw a photo of him you’d have no idea he has a failing heart.

Hypertrophic cardiomyopathy is a condition in which a portion of the heart becomes thickened without an obvious cause.

This results in the heart being less able to pump blood effectively.

In 2016, six weeks after she gave birth to her son Eli, Stephanie found Shawn, 34, unresponsive on their bedroom floor. His heart had stopped.

He has been diagnosed with an rare heart condition called hypertrophic cardiomyopathy, which thickens the muscles in your heart so they can’t pump blood as effectively around your body.

The family live in a constant state of limbo as they wait for a heart transplant, but that will only last him 15-20 years more. 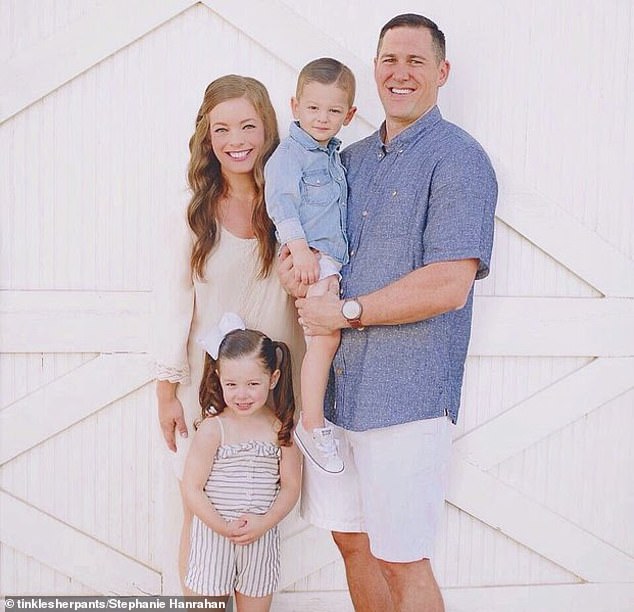 ‘Another fun fact? This condition is genetic. Our young daughter and son both have a 50 per cent chance of having it as well,’ Stephanie said.

Her daughter Campbell, five, is able to read on a fourth grade level – well beyond her years.

She was able to speak in full sentences at thirteen months old and can remember every statistic, show, book and random conversation you’ve ever had with her.

‘She was scouted by a modelling agency (except I’m a horrible stage mother who wouldn’t miss nap time to take her to auditions),’ Stephanie said. 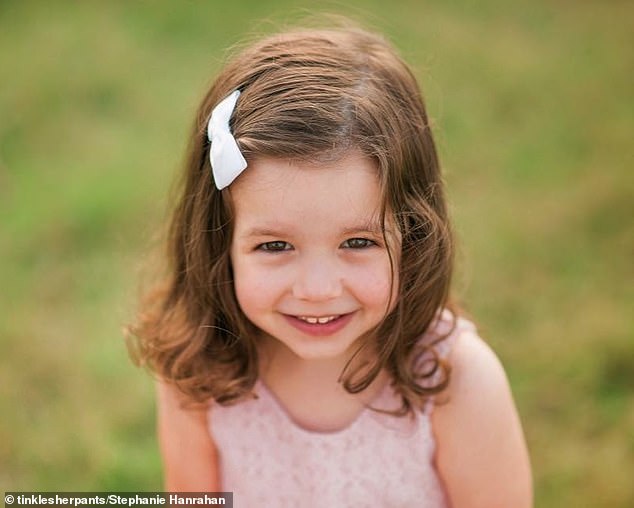 Her daughter Campbell, five, is able to read on a fourth grade level – well beyond her years

‘While other kids cried at new people or places, she ran in with ease. She’s an open-armed, loving, energetic girl.’

But Campbell has autism, something that can’t be seen in a photo.

Stephanie’s son Eli is physical, coordinated and can kick a ball that could earn him a scholarship in the future.

‘He’s the happiest kid I’ve ever met, and handsome, oh, so handsome. That dimple does me in,’ she said.

‘He likes donuts, parks, and putting things together – and thinks his sister hung the moon.

‘He’s a man of few words like his father, but when he speaks, he means it. I wish I could clone his happiness and drink up his smile. My son is magical.

‘And yes, he also has autism. No way to see that in a photo.’ 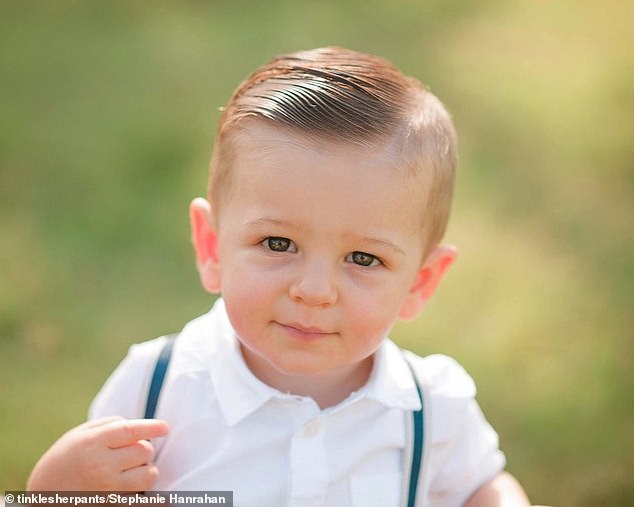 Stephanie’s son Eli is physical, coordinated and can kick a ball that could earn him a scholarship in the future 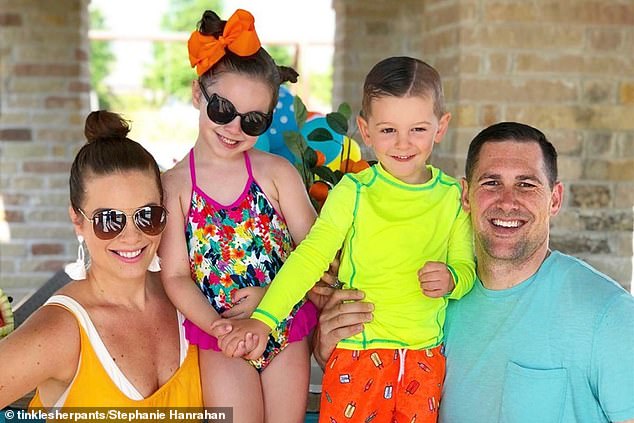 The Hanrahan crew are lifting the lid on their lives online

Stephanie herself, also has her own struggles.

She considers herself a chameleon, able to be the bright and bubbly or thoughtful and introverted woman the people around her desire to see.

Very few people get to see ‘behind the veil’ so she decided to show her ‘real’ portrait on the blog.

Stephanie has suffered through a number of personal issues, including sexual abuse, and has found herself in unhappy relationships in the past.

‘I became a nurse because it was safe. I had a stalker and cancer, twice. I moved to a new city on a whim, knowing no one. I was single for the first time in my entire adult life at twenty-five, and that’s when I met my husband. Cue the white knight,’ she said. 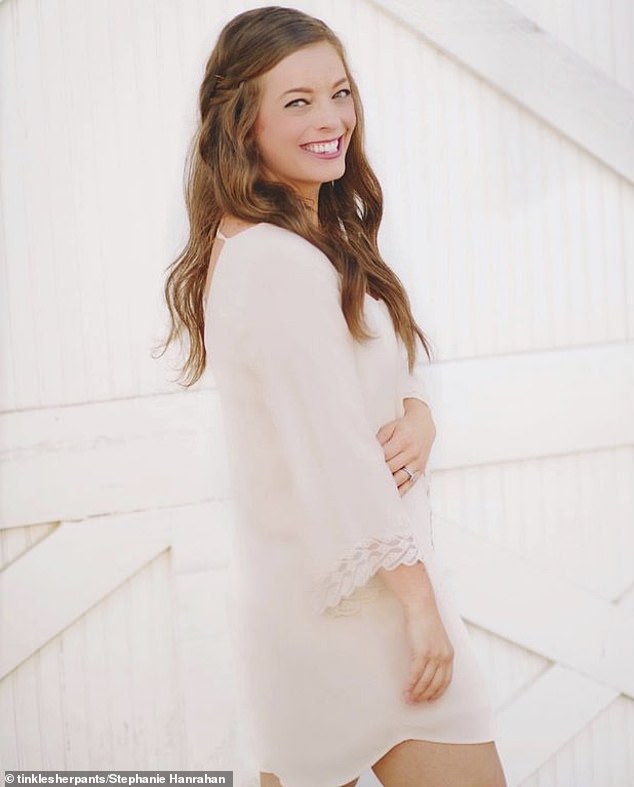 Stephanie considers herself a chameleon, able to be the bright and bubbly or thoughtful and introverted woman the people around her desire to see

‘I married, settled into suburban life, tried to start a family and had two miscarriages.

‘Then I had my daughter, my son, and found my husband on the floor.

‘Anxiety and depression have cycled through my veins my entire life, but now they are back with vengeance. Right along with low self-esteem and body image issues.’

None of these aspects of her life could be gleaned from a single photo.

And that’s why it was so ‘icky’ to read comments about her ‘perfect’ family life those photos attracted.

So she started her website and let others into her life, many of who could relate to her story. 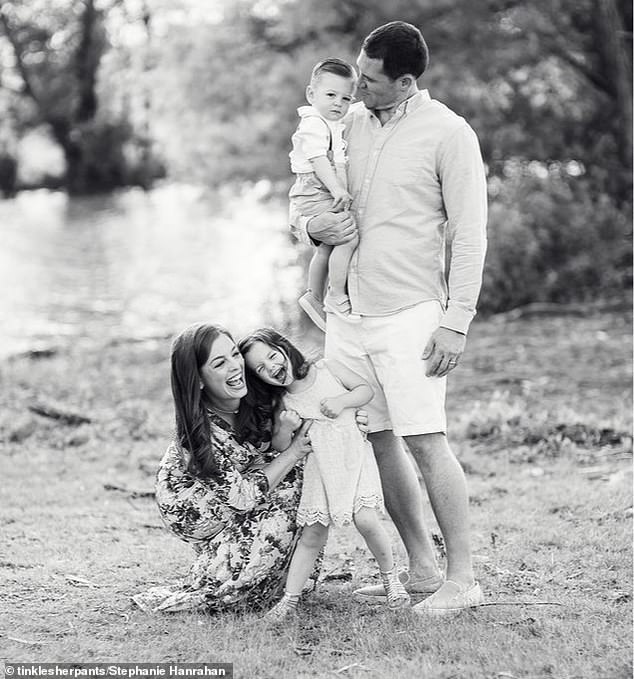 ‘We all have a private versus public image and that’s okay. There’s things we show the outside world and there’s things that we keep close,’ she said.

‘But the problem becomes when there’s no overlap. When you lead such a duplicitous life that you start saying (or posting) things you don’t even mean, feel, or believe.

‘That may get you a million likes, but in my experience humans desire more than that. And there’s just no way to get connection through perfectly filtered photos and carefully worded posts.’

‘If there’s a private image you want to make public, do it. Maybe even share it with one person first. It frees space for others to follow, or at the very least understand you better. No risk, no reward,’ she said.

‘And I promise when you do so, not only will your island of isolation shrink, the picture of your life will be worth way more than a thousand words.’

If you or someone you know is struggling, please seek professional help and contact Lifeline on 13 11 14. If you are in immediate danger, call 000.

Related posts:
12/03/2019 Lifestyle Comments Off on Mother explains why her family isn't as 'perfect' as they seem
Recent Posts
We and our partners use cookies on this site to improve our service, perform analytics, personalize advertising, measure advertising performance, and remember website preferences.Ok