If the problem with hagiography is that it uproots people from history, holding them aloft as solitary stars from the vast constellation of influences that forged them, then the same is true of vilification. A monster, like a saint, is someone made radically unique by extracting them from their social, intellectual, and political context. Both lack an intimate life – for villainy or genius is a lonely pursuit – and their ideas are ennobled or debased by being utterly dissimilar from anybody else’s of their era.

John Macarthur, whether remembered as “the ingenious Mr MacA”, “the father of Australian fleece” or most recently, by writer Kate Grenville, as a “colonial monster”, a bully, or “the most difficult man on the planet at that time” has swung wildly between both extremes.

For this reason, Alan Atkinson’s superb biography, tellingly entitled Elizabeth and John: The Macarthurs of Elizabeth Farm is a welcome contribution to Australian history, written in a manner not simply accessible, but poetic and abidingly pleasurable, for the scholar or intelligent reader alike. 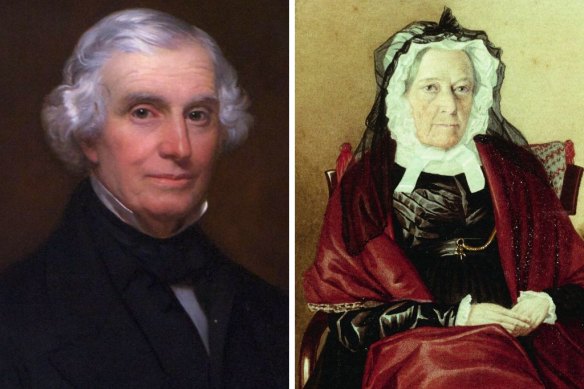 Alan Atkinson explains that the story of John Macarthur (left) must also be a story of his wife, Elizabeth (right).

Atkinson explains that the story of John must also be a story of his wife, Elizabeth, which is in turn a story of a marriage, a family, and friends; of the intimate ties that made imperial expansion possible. Far from uprooting the Macarthurs, Atkinson grounds them in an archival “forest of voices”, taking the reader on a gentle stroll to inspect the environment – the soil, air, and climate – in which their ambitions took seed and the imprint of Enlightenment philosophy on their habits of mind, their structures of feeling and John’s political interventions.

We see how their fortunes depended not simply on genius or skill, but on the vicissitudes of markets in Britain and the violence of dispossession in Australia. This is a history that is embedded and embodied – we hear “tear-ragged” voices when family members die, we feel the pangs of gout, the sharp stabs of madness and we sit suspended with the Macarthurs in imperial webs of commerce, curiosity, coercion, and care that glimmered in the twilight of the 18th century, spanning the surface of the European world. 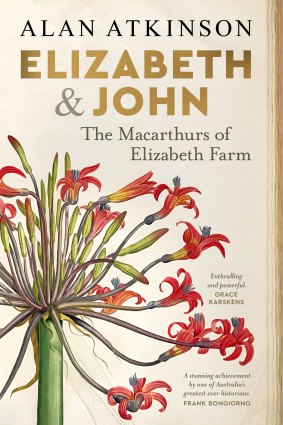 Elizabeth and John: The Macarthurs of Elizabeth Farm by Alan Atkinson.

Elizabeth and John focuses on the period from the 1790s until the 1830s, but its intellectual framing is drawn from scholarship on 18th-century Enlightenment thought. To this end, we follow the story of the Macarthurs through a set of familiar episodes – John’s service in the military, their arrival in Sydney in the 1790s, their experiments in sheep farming, the (so-called) rum rebellion, and John’s political and commercial interventions in the 1820s and ’30s – but rather than being a simple story of colonial ambition or burgeoning democracy, it is, surprisingly, a tale of the influence of European philosophical and scientific thought on the early colony.

For instance, Macarthur’s research into viticulture in 1815-16 sees him and his sons citing Rousseau on the streets of Geneva, attending public lectures and learning to think of wine production as an integrated agro-economy: further proof of the French philosophers’ “insistence on a unified web of life″⁣. The Macarthurs’ thinking bears instruction for agriculturalists wrestling with climate change today.

Atkinson cares equally about the history of ideas as he does about the Macarthurs, and these two preoccupations produce a book delightfully dizzying in breadth and scope. This is a history that soars and swoops between mammoth global processes and exquisitely personal sentiments.

A letter from John to Elizabeth, for example, prompts reflection on the relationship between writing, self-awareness and love, on how better roads, transport and sea navigation meant a more reliable postal service: “thoughts flew and letter-writing was more fluid and more consistently intimate. Distance vanished.”

A potentially tedious history of wool production is exalted through tracking its provenance in novel ways of knowing; a simple ledger book used by the Macarthurs tells us of new structures of thought that cast a merchant’s vision into the future. The ledger was a technology that would help to topple the vagaries of divine power or the corruptions of patronage with commercial exactitude and the logic of secular administration.

Like a connoisseur, Atkinson samples the philosophy of Voltaire, George Washington or Adam Smith and mixes it around with the prosaic thoughts and feelings of a sheep-farming family.

But this feature of the book, which I see as its primary virtue, may also explain its weaknesses. Enlightenment fantasies of efficient, harmonious organisation based on rational principles often appear less as conceit than as truth. John Macarthur’s political vision of the uses of convict labour – governed by a benign overlord who rewards merit, punishes indolence and who marshals muscle into the service of colonial prosperity – reads as eminently logical rather than an exercise of power in the interests of personal wealth accumulation.

The overarching framework of Enlightenment philosophy is also responsible for the sidelining of Elizabeth Macarthur. In spite of Atkinson’s best intentions to give Elizabeth the same rich inner-life he gives to John, we arrive at the end of the book with a vaporous vision of Elizabeth, uncertain as to who she actually was.

She merits the most attention when engaged in agro-economy – managing the farm while John was away – botany, or record-keeping, or if a visitor describes her cleverness. Evidence of marital friction – such as when Elizabeth and John stop sharing the same bedroom – cedes to a vision of harmonious, unified familial order: “they now shared a new kind of affection” we are told, unconvincingly.

It is not that Atkinson doesn’t acknowledge structural power differences between husbands and wives. He does, only to smooth it over with his own preferred vision of complementarity, interdependency or a “unified web of life”. A few short staccato sentences about legally-backed male tyranny are quickly effaced by the rolling arpeggios of Atkinson’s lyrical prose from which emanates imaginings of familial intimacy at times innocent of hierarchy.

Atkinson is not alone in struggling to produce a genuinely two-sided biography of a marriage. Even feminist biographies such as Phyllis Rose’s Five Victorian Marriages subsumes the story of wives into a narrative structured around their husband’s public achievements. For the Macarthurs, there is not a want of archival sources for Elizabeth (though it might be argued that even the most vivacious wife would be dwarfed by the gigantic theatricality of John Macarthur’s life.)

The problem lies in a masculine-defined criterion of historical significance based on public deeds, or in this instance, a person’s contributions to Enlightenment Schemas. The true challenge would be to produce a narrative inclusive of a feminine enlightenment, one more attentive to the politics of marriage, manners, and the minutiae: one with as much Jane Austen as Voltaire.

Elizabeth and John: The Macarthurs of Elizabeth Farm by Alan Atkinson is published by NewSouth, $39.99.

Alecia Simmonds is an inter-disciplinary scholar in law and history at UTS. Her book Courting: Stories of Love from the Archives of Law will be published by Black Inc/La Trobe University Press in November 2023.

The Booklist is a weekly newsletter for book lovers from books editor Jason Steger. Get it delivered every Friday.

01/13/2023 Lifestyle Comments Off on ‘Most difficult man on the planet’: Was John Macarthur a genius or a monster?
Recent Posts