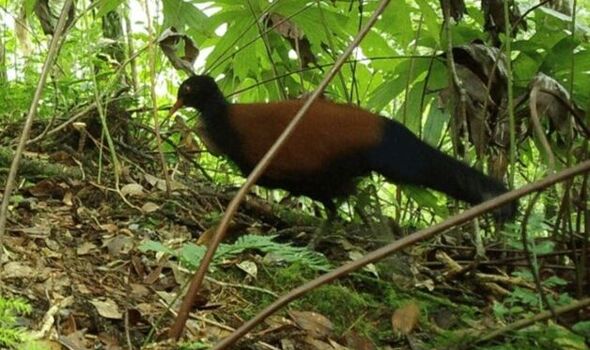 Footage of a black-naped pheasant-pigeon was captured in a forest of a tiny island off Papua New Guinea called Fergusson in September by a team of scientists.

Expedition co-leader John Mittermeier described the discovery, which involved 20 camera traps and countless interviews with locals, like “finding a unicorn”.

Researchers hope the find will help save the large, ground-dwelling species from extinction.

Mr Mittermeier said: “It is the kind of moment you dream about your entire life as a conservationist and birdwatcher.”

Members of the team attempted to find the bird on Fergusson – its only habitat – in 2019 but failed.

But the researchers this year found villages on the western slope of Mount Kilkerran – the island’s highest peak – where locals had heard its distinctive call.

The expedition’s co-lead Jason Gregg said: “[There] we started meeting hunters who had seen and heard the pheasant-pigeon.”

The researchers captured the bird just days before the team was set to leave the island.

Cornell University researcher Jordan Boersma said: “As I was scrolling through the photos, I was stunned by this photo of this bird walking right past our camera.”

The images they captured are the first time the long-lost bird has been documented by scientists since 1882.