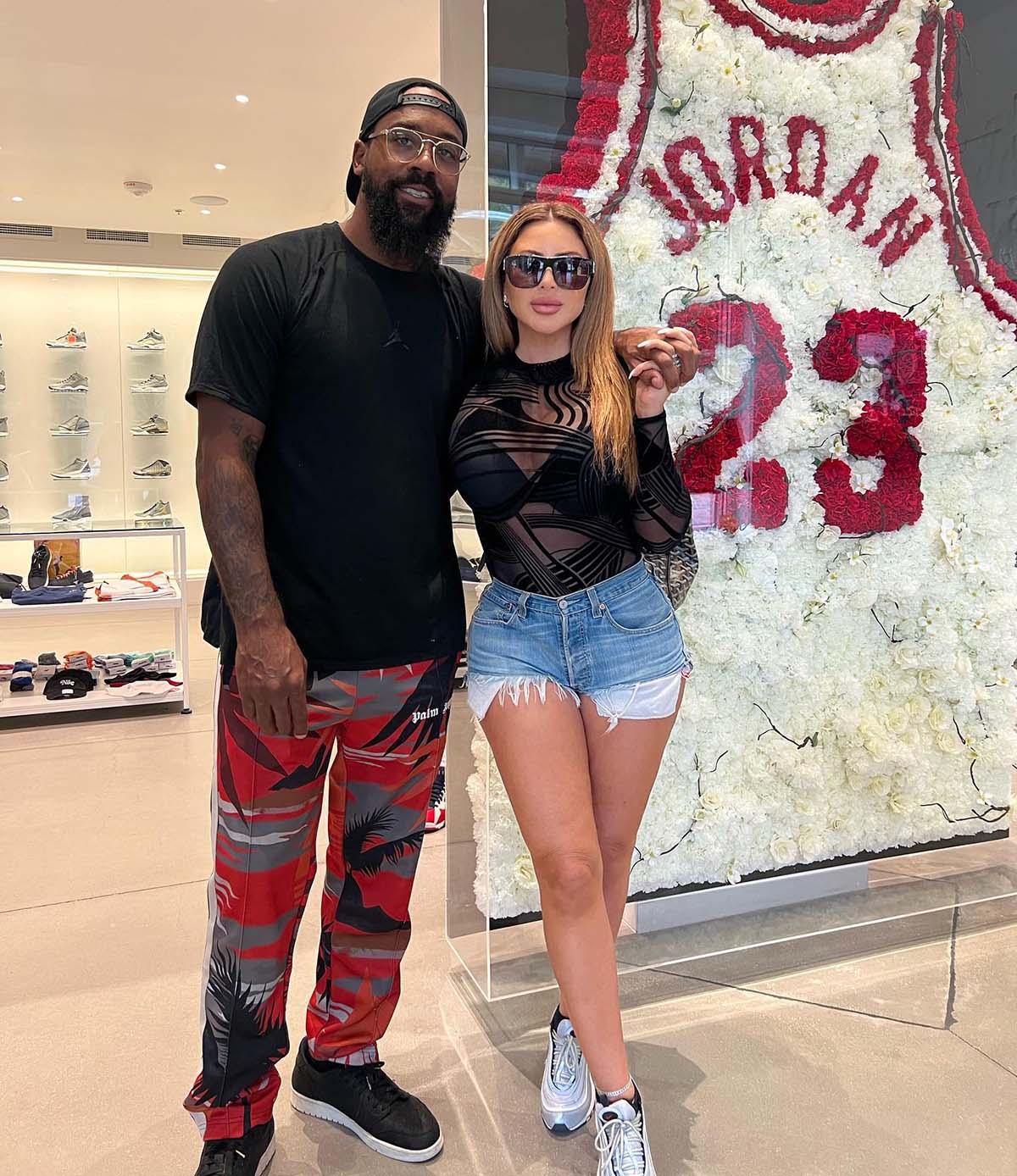 Grid so you know it’s real! Larsa Pippen made her romance with Marcus Jordan Instagram official with a post that included a nod to her boyfriend’s dad, Michael Jordan.

The Real Housewives of Miami star, 48, and the former college basketball player, 32, posed for a photo at Marcus’ Trophy Room boutique in Orlando, Florida. “✔️Checks over stripes🏆,” the Peacock personality captioned the snap, which showed the couple posing in front of a floral arrangement designed to look like Michael’s Chicago Bulls jersey.

In the comments section, Marcus chimed in with a flirty comment reading, “That’s what I like, that’s what we like!✔️™️✖️🏆✨.”

Pippen and the Chicago native have kept their romance relatively under wraps since they were first linked in September 2022, but earlier this month, an insider exclusively told Us Weekly that the pair are starting to get serious.

“Larsa and Marcus are still trying to play it coy [but] it’s very obvious to everyone around them that the chemistry is off the charts and they’re crazy about each other,” the source explained. “They’ve been friends for years. She’s super comfortable with him and has always said he’d be a major catch for anyone.”

An insider previously told Us that the twosome initially played coy about their relationship status because of the feud between Larsa’s ex-husband, Scottie Pippen, and Marcus’ dad, 59. “They are trying to keep it on the down low because of the rift between Scottie and Michael,” the source said in September 2022, adding that the duo had been “spending more time together.”

Larsa and Scottie, 57, tied the knot in 1997 and later welcomed four children: Scotty Jr., 22, Preston, 21, Justin, 18, and Sophia, 14. The Larsa Marie designer and the retired NBA player split in 2018 before finalizing their divorce three years later.

Scottie and Michael played together on the Chicago Bulls in the 1980s and ’90s, leading the team to six NBA championships. The pair were once close, but Scottie revealed in his November 2021 memoir, Unguarded, that he was upset with his former teammate for the way he glossed over his contributions to the team in the 2020 docuseries The Last Dance.

“They glorified Michael Jordan while not giving nearly enough praise to me and my proud teammates,” the Arkansas native wrote. “Michael deserved a large portion of the blame. The producers had granted him editorial control of the final product. The doc couldn’t have been released otherwise. He was the leading man and the director.”

Larsa, for her part, has said that she and Scottie have remained close since their split. “[We] are really best friends,” she exclusively told Us in December 2019. “Our kids are amazing, and I feel like we both parent the same way. We’re really traditional in the way we raise our children. That’s really important. … We are obsessed with our kids. Scottie and I are both the same in a lot of ways. Family always comes first.”