"I'm like that really annoying kid in school that's like bragging that they made out with the popular girl but has no proof."

In the film, Hayek plays Pina Auriemma, the psychic who helps Gaga’s Patrizia Reggiani hire someone to kill her husband Maurizio Gucci, portrayed by Adam Driver. While their relationship is strictly platonic in the finished film, some sizzling footage wound up on the cutting room floor.

During an appearance on “Jimmy Kimmel Live!” on Monday night, the “Born This Way” singer revealed she came up with the idea of a sex scene with her 55-year-old costar, following a passionate kiss.

“I’ll never forget, I was like, ‘OK, listen, so before we do this scene I just want your consent to do something together,'” Gaga recalled asking Hayek, in her character’s Italian accent. “And she’s like ‘OK, what do you want to do?'”

“I said, ‘okay so I was thinking, you know, after the hit gets put out on Maurizio and you get the phone call that he’s dead, that I walk over to you and kiss you,'” she said. “And she’s like, ‘WHAT!'”

Although the 35-year-old pop legend received the green light from director Ridley Scott, the scene was later cut despite being filmed.

“The only reason that it’s not in the movie is because that whole scene was cut,” Gaga told Kimmel. “But it was an awesome scene and she’s walking around the house and the camera was following her feet and all the cats were following her. And Salma, in order to get the cats to follow her, she put a bunch of catnip in her boots.”

“Salma’s walking around the house and the cats are following her and then we’re surrounded by cats, and we started making out and I made out with Salma Hayek,” Gaga laughed. “I’m like that really annoying kid in school that’s like bragging that they made out with the popular girl but has no proof.” 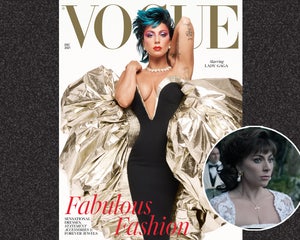 Since the film’s release, Gucci family members have slammed Scott’s film — calling it inaccurate, extremely painful and “an insult to the legacy on which the brand is built.”

Family members had heavily criticized aspects of the film in the lead up to its release; after finally getting to see the finished product, their opinion has not been swayed.

“The Gucci family takes note of the release of the film ‘House of Gucci’ and is a bit disconcerted because, although the work claims to want to tell the ‘true story’ of the family, the fears raised by the trailers and interviews released so far, are confirmed: the film carries a narrative that is far from accurate,” the heirs of Aldo Gucci said in a statement, translated by Variety.

“The production of the film did not bother to consult the heirs before describing Aldo Gucci – president of the company for 30 years – and the members of the Gucci family as thugs, ignorant and insensitive to the world around them, attributing to the protagonists, events, a tone and an attitude that never belonged to them,” it read.

“House of Gucci” first hit theaters in November of 2021 and will be available for streaming January 31.