“I have to try to bet on myself,” says Kumail Nanjiani, reflecting on the drastic new direction he has taken for his latest series. “It was this strange, dark story, and these things never come my way. I wanted to see if I could do something like this. But it was scary not to be able to fall back on my comedy.” 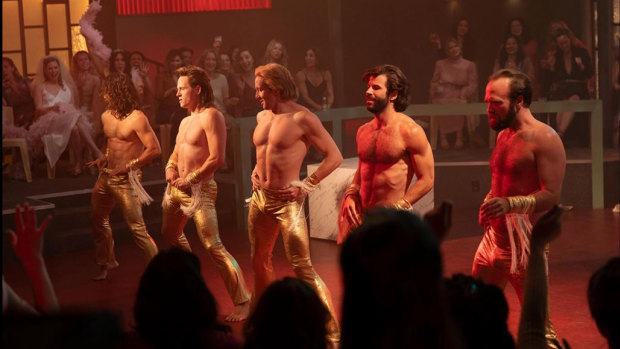 American raunch hits the screen in Welcome to Chippendales.Credit:Hulu

Welcome to Chippendales is an eight-part drama now on Disney+ which tells the story of Banerjee’s rise and drastic descent, a story that ended with him hanging himself while awaiting sentencing for attempted arson, racketeering and murder for hire. Banerjee is a figure out of touch among the fashionable crowds of 1970s Los Angeles: slightly squishy round the edges, clad in naff suits, emotionally unavailable, eventually consumed by greed.

“[His story] is the American dream taken to its logical end,” Nanjiani says. “If you look at the people who are known for being rich and successful, it always ends up in a dark place. You can never have enough. The definition of success in America is being more successful than you were yesterday, which isn’t sustainable. At some point you have to decide to be happy where you are. We don’t really have a narrative for people who say ‘you know what, this is enough for me.‘” His Banerjee is a “toddler,” he says, in whom complex emotions express themselves only as anger.

While Chippendales is Nanjiani’s most striking departure, he has made a habit of gentle self-reinvention, both in terms of the roles he has taken on and physically. In 2019 he “broke the internet,” in online parlance, when he uploaded selfies to Instagram showing the ripped, muscular physique he had developed for his role in Marvel’s Eternals, which came out in 2021 to mixed reviews. So drastic was Nanjiani’s transformation that he was accused of using steroids: an accusation, others noted, rarely levelled at white actors who hit the bench-press.

He is now clearly back in shape, Hollywood arms straining at the sleeves of a tight white T-shirt, and just as clearly bored to tears of discussing his body.

“Whatever it requires, I’ll do it,” he says, as politely as he can, about piling on the pounds and shedding them again. “It’s just part of the preparation. I think we’re all blasé about talking about people’s appearances. At some point it’ll be weird to talk about anyone’s experience in any kind of qualitative way. It is what it is. I don’t really have any wild insight. I do the work and then weather the storm. People project their own things onto other people and sometimes you get caught in the crosshairs of that. I have a very regimented life, which allows me to feel free.”

Nanjiani grew up in Karachi, Pakistan, the eldest of two sons of Aijaz, an accountant, and Shakeela, a dentist. “My dad was emotionally expressive, so I always had a role model of a man who was OK crying and expressing affection,” he says. “But I would be embarrassed by it. I didn’t like seeing my dad like that, so for a big chunk of my life I wasn’t expressive. It wasn’t until a few years ago, when I started taking acting classes, that I realised there was all this stuff inside me that I had been pushing away. Therapy helps, too. Comedy is very intellectual, but acting is very emotional. You could be a successful comedian your whole life without ever having to access [those emotions].”

Nanjiani “hated” school, he says, but studied hard regardless. “I don’t think I’ve ever hated anything as much as I hated school back then,” he says. “But I also spent so much time studying. It’s weird to be so good at the thing you despise. It gave me a really good work ethic. It’s uncool. But I realised a long time ago I will never be cool, and that’s fine. I have a cool wife! But I was a genuine nerd even before everyone called themselves nerds.”

He moved to Iowa for university, where he majored in computer science and philosophy and swapped the Shiite Islam he had grown up with for atheism. After graduation he worked odd jobs – including IT – while he established himself on the stand-up circuit. His act revealed a sharp, sensitive comedian with Pakistani Muslim heritage: a welcome rarity in the wake of 9/11. Parts in TV followed, with Nanjiani typically cast as nerdish minor characters. In 2014 he was cast as Dinesh, a lead character in the tech-world satire Silicon Valley, which ran for five years. 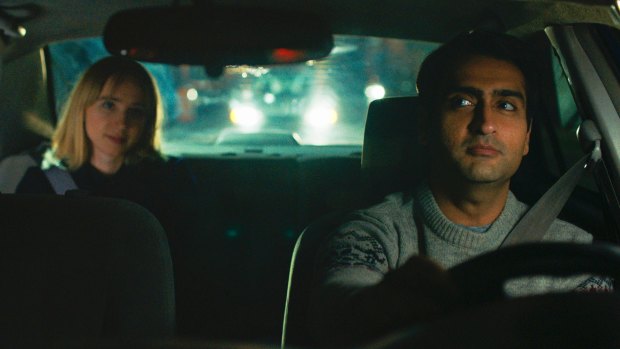 Zoe Kazan (left) and Kumail Nanjiani in The Big Sick.Credit:AP

Then in 2017 came The Big Sick, the charming romcom Nanjiani wrote with his wife, Emily V. Gordon, based on their real-life courtship. Kumail’s character, a jobbing comedian called Kumail, briefing dates a woman called Emily (Zoe Kazan) before she comes down with an infection and is put into a medically induced coma. The film took more than $56m at the worldwide box office, and won Nanjiani and Gordon an Oscar nomination. He remains rightly proud of it. There’s a pattern to some of his work, I suggest, which is that he does something to great acclaim – education, stand up, podcasts, TV work, getting in shape – whereupon he wants to move on at once.

“I think that’s a fair point,” he says. “But that’s not my reaction to The Big Sick. “I’m very proud of it. But I hope we’ll never do anything as nakedly personal as that.” The only thing he regrets about the film, he adds, is its dismissive portrayal of the Pakistani women who are presented as an alternative to Emily. “I didn’t realise I had a responsibility then. But I do. And there aren’t many brown women depicted in American pop culture. I only thought of them as how they function in the story and I regret that.”

While he relished the chance to try “about 100 new things” for Chippendales, Nanjiani has no particular plan for what comes next. He is not done with romcoms, or comedy, or even if he never again puts his own life into his material as unfiltered as he has in the past.

“I’m not a very nostalgic person,” he says. “I have good memories but I don’t really revisit things. If I’ve made something and it comes out and people like it, it means not too much to me, because I’ve moved on. I would love for people to love everything I ever did, but I don’t really sit on it. It’s about whatever’s the most exciting thing that comes along. Ideally it forces me to be good at something I haven’t had to be good at before.”

That said, it needn’t necessarily require a new genre or a year in the gym or a sensitive exploration of a vulnerable moment in his life. “I’d love to do something with a sword,” he says. You suspect he will find a way.