Kirsty Webeck swims against the comedy tide. The Canberra-born, Melbourne comic doesn’t crack jokes about sex or politics or climate change. She’s not self-deprecating. If she talks about her fiancee, Elle, a nurse, it is with the utmost respect. 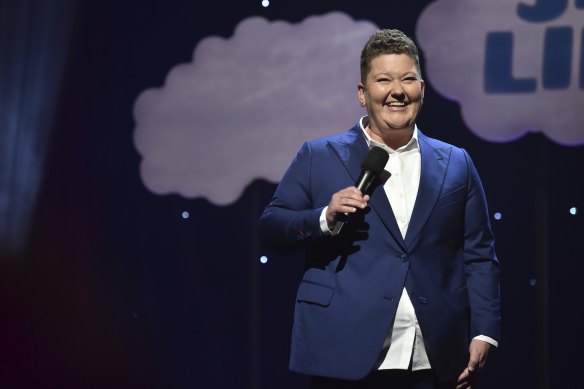 Kirsty Webeck describes her stand-up as a joyful collection of anecdotes about everyday lives. Credit:Jim Lee

“I never set out to be a clean comedian, but that’s just the sort of thing that appeals to me,” says Webeck. “I’m amused by the minutiae of day-to-day life, and I find people’s turn of phrase really funny.”

Even Webeck’s career trajectory is unconventional. A former public relations consultant for everything from accounts to NGOs, she took a comedy workshop in 2013 instead of learning the craft through the well-worn path of open-mic nights. She then began performing one-hour shows and even promoted herself.

Webeck got her break in 2016, with a five-minute set alongside her comedy idols Denise Scott, Cal Wilson, Geraldine Hickey and Hannah Gadsby at the Midsumma Lesbian Comedy Gala. “I remember how kind everybody was … even though it was obvious I had a whole lot of work to do,” says Webeck.

She went on to appear on the ABC’s Tonightly with Tom Ballard, open live shows for Joel Creasey and Tom Gleeson, score roles in Network Ten sitcom How To Stay Married and Nine’s Metrosexual, and is now a regular on ABC Radio and The Project.

“My whole life, people told me I should be a stand-up comedian and I pushed it right to the back of my mind because I knew that it would be very, very different to just being funny in a social setting,” she says.

“It’s something that a lot of people don’t realise. Every time I come off stage, there’s always at least one person from the audience that goes, ‘Yeah, this is my mate Gary, he can do what you do, he’s so funny!’ Some of my best mates are the funniest people I know, but they’d never do stand-up because they know that you have to learn an entirely different way of being funny. So I think I had the good sense to put it on ice till I was 30. I was a late bloomer, as they say in the industry, but by that stage I had things to talk about and a bit of life experience and I’m glad that I waited.”

A major part of Webeck’s life experience is yet to make it into a routine. For six years she lived in Taiwan, working at a publishing house where she wrote novels for teens (in English) and picture books for children (in Mandarin).

“In the next few years I’ll probably write a show about that period in my life,” she says. “It really shaped who I am as a person. It was such a huge learning curve and I have such deep love and respect for the culture and the language. I think I’d be able to do it justice.”

For now, she’s sticking to her “trademark silliness” for her next show, A Bit of Fun, and waiting for the impact of her first streaming show on Paramount+.

“It’s a very exciting time,” she says. “We’ll see what happens. People want a good time. They just want to laugh and they know that I’m a pretty safe bet. I know I’ve got a reputation for doing my absolute best to never marginalise anybody and I pride myself on that.

“When I’m writing I always go over it with a fine-tooth comb to make sure no one is the butt of the joke, or if they are, occasionally, it’s me. But I’m not self-deprecating. I’ve got a very healthy sense of self.

“I don’t feel that I need to be the butt of the joke in order to make other people laugh, because I don’t think I’m a joke.”

Reward your time with these TV shows

11/18/2022 Lifestyle Comments Off on Kirsty Webeck never set out to be the ‘clean comedian’, but it’s working
Recent Posts