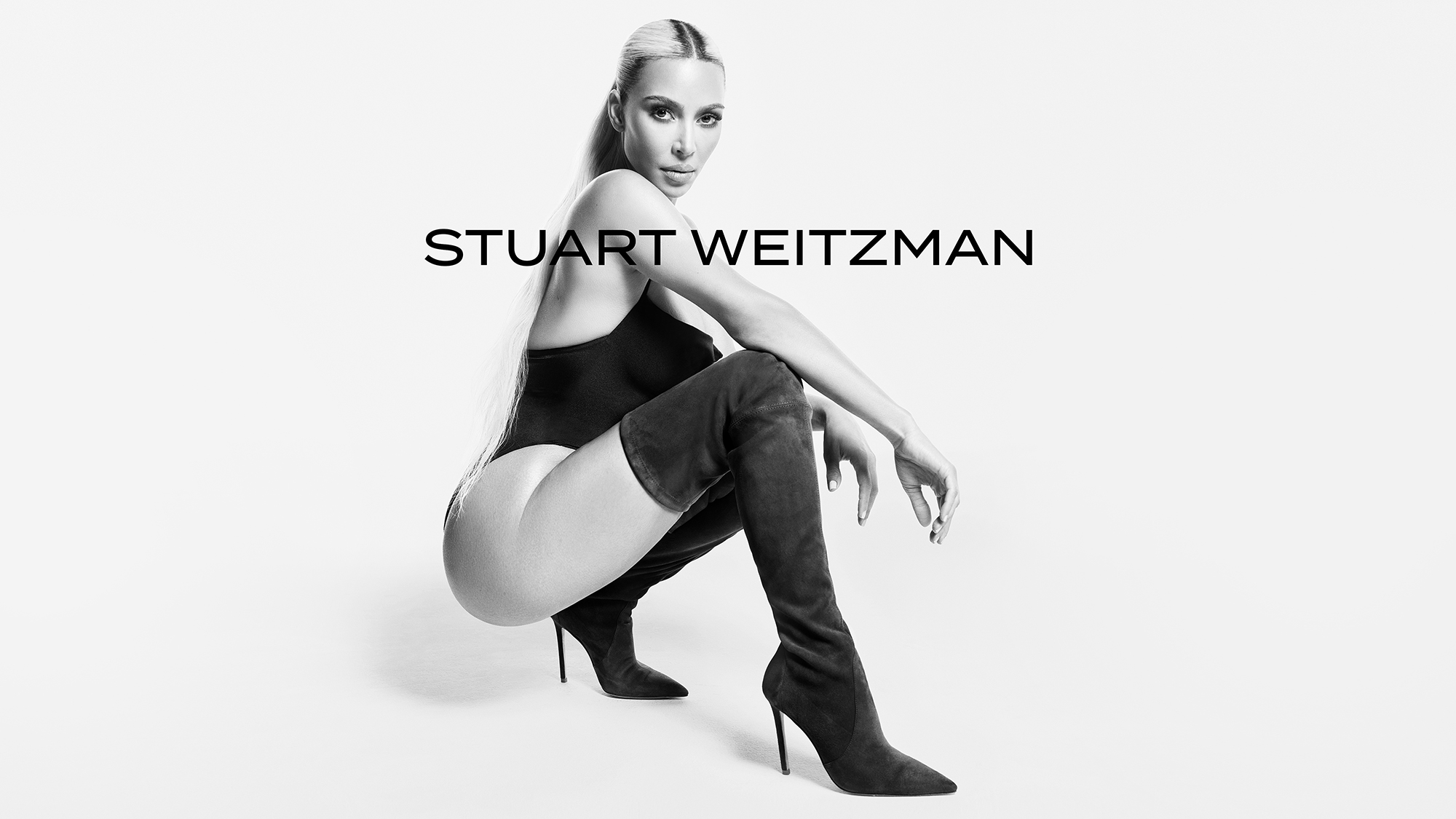 Kim Kardashian has updated her resume! The reality star is the new face of Stuart Weitzman.

The 41-year-old’s role was announced in a press release on Tuesday, September 20, along with a sexy black and white campaign for the luxury shoe brand. In the fall ad, the Skims founder showed off her famous curves, posing in the label’s Ruche 100 Boot, the croc-embossed Lucite Wedge Boot and the thigh-high Ultrastuart 100 Boot. The Kardashians star paired the footwear with high-cut bodysuits that exposed her bum.

The campaign — titled “Stand Strong,”​​ aims to recognize women that do exactly that. Kardashian praised the company in a statement, sharing: “I’m thrilled to be featured in Stuart Weitzman’s Fall campaign shot by the incredibly talented Mario Sorrenti.” She continued: “This campaign is inspired by both the brand’s legacy and vision for the future … Stuart Weitzman’s iconic and timeless styles continue to bring the newness women truly want. I am excited to be part of the next chapter of Stuart Weitzman’s iconic campaigns.”

Edmundo Castillo, Stuart Weitzman’s Head of Design, is equally excited. “Kim embodies the woman I design for,” he said. “She’s spirted and lives life on her own terms. Whether it’s with bright thigh-high boots, sandals that tie all the way up the leg or combat boots that are strong and genderless, it is my hope that women feel unstoppable in SW shoes.”

This year has been a big one for the Skims founder when it comes to fashion. Her new gig with Stuart Weitzman comes after she was tapped by Balenciaga to star in the fashion house’s February 2022 campaign.

The promotional shoot couldn’t have been more fitting for the Selfish author as it featured shots of her taking selfies in the living room of her Calabasas mansion. The TV personality modeled a handful of items from the collection including a leopard-print coat, a black body con dress and studded booties. Handbags also took center stage, as the star carried the Cagole handbag in both lime green and black. 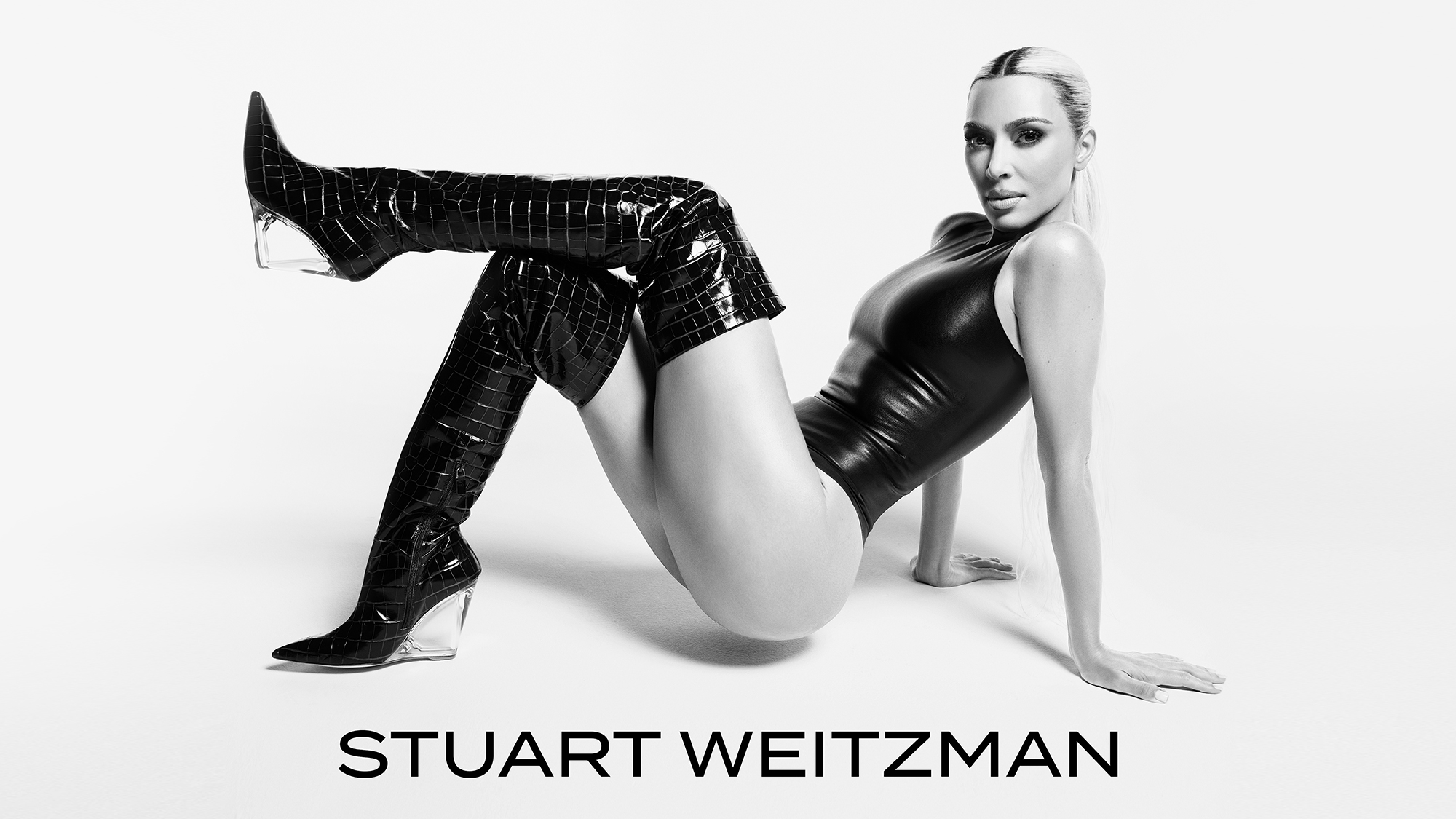 Her fashion industry takeover didn’t stop there. In May, Kardashian caused an uproar when she attended the Met Gala in Marilyn Monroe’s historic Bob Mackie gown. Although she only wore the crystal-covered design on the red carpet and changed into a replica before heading inside, the beauty mogul was accused of damaging the dress by collector Scott Fortner.

Both Kardashian and Ripley’s Believe It or Not! — the museum that acquired the frock for a whopping $4.8 million in Los Angeles in 2016 — denied she ripped the number.

“I respect [Marilyn],” the businesswoman said during an appearance on Today in June. “I understand how much this dress means to American history and with the [Met] theme being American, I thought what is more American than Marilyn Monroe singing ‘Happy Birthday’ to the President of the United States.”

When co-anchor Hoda Kotb asked Kardashian to address claims the dress was “ruined,” she shook her head and said, “No … Ripley’s [and I] worked together so well. There were handlers and gloves that put it on me.”

09/20/2022 Lifestyle Comments Off on Kim Kardashian Is the New Face of Stuart Weitzman: See the Sexy Ad
Recent Posts