A policy vacuum in human form: This week Keir Starmer had the chance to show Britain what he stands for. Instead, says former Labour minister TOM HARRIS, he has once again proved that he’s running on empty

The economy looks set to dip into recession; inflation is at a 40-year high; some Tory backbenchers are still conspiring to unseat their leader, who has just lost his second adviser on ministerial ethics — and could well lose two key by-elections tomorrow.

And yet who is the politician under most pressure right now? Sir Keir Starmer.

It takes a certain skill set for a leader of the Opposition to put himself so far on the backfoot when so much is going wrong for the Government. But Starmer seems to have the requisite skills in abundance.

As the PM attempts to navigate some extremely choppy waters, it is Starmer who looks closer to capsizing.

Why? Well, there’s a clue in what his critics within Labour are saying about him.

The mayor of Greater Manchester, Andy Burnham, last week challenged his party leader to explain what he stands for.

‘There can’t be much further delay now in saying “This is what we are about”, so that people can get the sense of where the next Labour government would go,’ Burnham told Radio 4’s PM programme. ‘That really does have to happen at the annual conference in Liverpool. I would have said it should have started more last year.’

Burnham is not alone in seeing Starmer as a policy vacuum in human form. 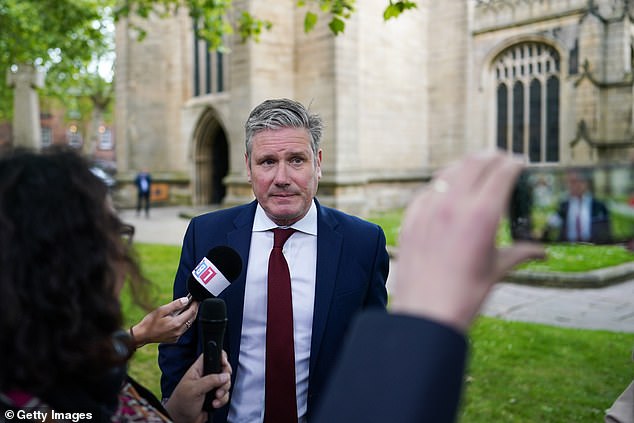 Immigration? Trans issues? Ukraine? Who knows what he really thinks?

As a former Labour MP and a minister in the last Labour government, I am aghast at the opportunities Starmer has missed to hammer home criticism of this Conservative administration.

Think back to the last time a Labour leader of the Opposition was set to displace a Tory government, and the conclusion is obvious: Keir is no Tony Blair.

The latest self-inflicted damage is the best example yet of a leadership all at sea.

The strikes on Britain’s railways this week are bringing misery to millions. I should stress at this point that I have no objection to trade unions having the right to withhold their labour in support of demands for better pay and conditions. In fact, no one, not even the Government, is suggesting they shouldn’t.

But the cold, hard facts are that railway workers are already among the best-paid in the country. Nor did they suffer as much as many others during the pandemic. Their industry was safeguarded by a cash injection of £16 billion of taxpayers’ money.

So it’s no surprise that commuters reckon the RMT should be showing its appreciation of such largesse by working hard to dig the economy out of the hole that Covid put it in, rather than engaging in a dispute that is estimated to be costing the hospitality industry alone a huge £1 billion a week.

And when the first national strike for nearly 30 years cripples the rail network, it’s reasonable to ask the Labour Party — founded and funded by the trade unions, remember — where they stand on the industrial action.

Who does Her Majesty’s Opposition side with, the pickets or the passengers?

We still don’t know because the ambiguity over this question starts at the very top of the party. When Starmer is invited to criticise the unions, all we get is deflection.

The RMT isn’t even affiliated to the Labour Party any more, so why is Starmer so terrified of upsetting its leadership?

Starmer’s statement on the eve of the strike encapsulated his fence-sitting perfectly: ‘We also must show leadership and, to that end, please be reminded that frontbenchers, including Parliamentary Private Secretaries (PPSs), should not be on picket lines.’

Leadership? How can a party show leadership by not doing something? 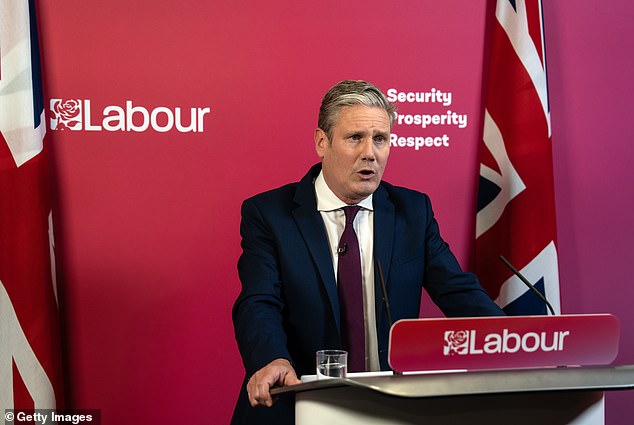 We ‘still don’t know’ whether Labour is siding with picketers or passengers in the strikes, writes Tom Harris

Ordering your MPs to keep out of sight when the rest of the country has ground to a standstill is the very opposite of leadership. But try telling that to ‘Submarine Starmer’ — who, by the way, was nowhere to be seen yesterday.

Is it any wonder that in the first few hours of the dispute, at least four frontbenchers — three parliamentary private secretaries and a whip — had flouted Starmer’s instruction and been pictured on picket lines as they displayed solidarity with striking railway workers?

Such defiance surely merits only one response — Starmer should be issuing P45s to his recalcitrant colleagues.

But no. Labour was quickly briefing that any decision over whether to discipline them would wait until the weekend, when the three days of industrial action would be over. Oh, and by then the two key by-elections in Wakefield and Tiverton and Honiton would also be done and dusted. Pure coincidence, I’m sure.

More blatant displays of defiance of the leader’s authority can hardly be imagined, given the publicity that accompanied Starmer’s original edict. And yet the Labour leader appears too afraid of the repercussions to wield the knife.

What any leader of the Opposition worth his or her salt would have done is unequivocally taken the side of millions of beleaguered commuters and small businesses imperilled by the strike. 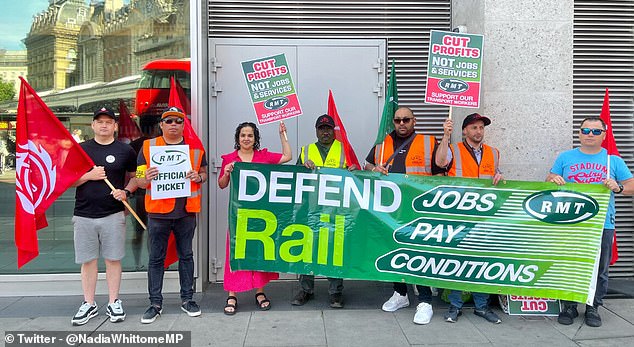 When Starmer is invited to criticise the unions, all we get is deflection,’ writes Tom Harris. Pictured are RMT union members on strike at Victoria yesterday

They would have told the union leaders to cancel their strike and announce Labour’s support for legislation to compel the unions to provide at least minimum levels of staffing on strike days. That would have caused uproar in his party, but sometimes fights are needed to clear the air.

This week Starmer has had an opportunity to show his party — and the country — who is boss, to let it be known that he, not the Trades Union Congress, would decide policy under a Labour government.

And if the unions wanted to walk away with their cash, they could do so.

Andy Burnham’s question about what Sir Keir stands for is an important one, and it remains unanswered.

Starmer’s critics on the pro-Corbyn hard-Left of the party have already pointed out the leader’s tendency to say one thing and do another.

When he stood for the leadership in 2020 he promised to keep most of his predecessor’s policies, including Corbyn’s infamous ten pledges, promising everything from full employment to strengthening the unions.

I don’t blame Starmer for reneging on any of this Left-wing nonsense, and I hope we’ll see more of it ditched before his tenure as leader ends. But the story of the pledges — and his subsequent abandonment of them — tells us more about what he doesn’t believe than what he does. 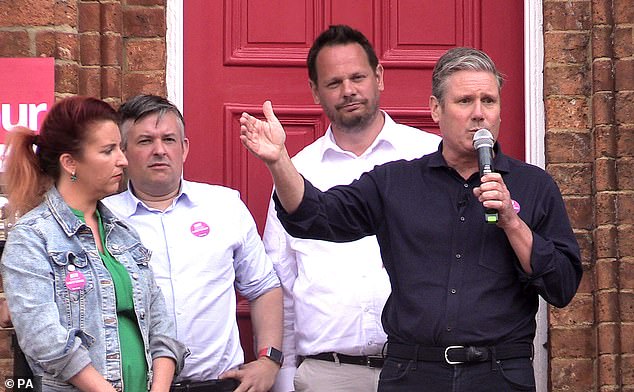 ‘The story of the pledges — and his subsequent abandonment of them — tells us more about what he doesn’t believe than what he does,’ Tom Harris writes

Last year, he published a 14,000-word pamphlet that was billed as a guide to his personal political philosophy and, to ram the message home, he followed it up with a 90-minute speech to the Labour conference.

Sadly, no one who read the pamphlet or managed to stay awake to the end of the speech was any the wiser about Starmer’s vision for the country.

As soon as Tony Blair became leader of the party in 1994, he set about rewriting Labour’s rulebook, removing the once-sacred Clause IV of the party’s constitution, the pointless commitment to mass renationalisation of industry.

Once in power, he and his Chancellor, Gordon Brown, began introducing bold reforms from the very beginning, when they handed the power to set interest rates to an independent Bank of England.

This paralysis has to end soon. As the song says: If you stand for nothing, what’ll you fall for?

Tom Harris was Parliamentary Under-Secretary of State for Transport from 2006 to 2008.