Juice WRLD, who rapped about his struggles with substance abuse and achieving meteoric success, died of an accidental drug overdose during a December drug raid at Midway Airport in Chicago, a medical examiner ruled Wednesday.

The rapper, whose real name was Jarad Higgins, died December 8 as a result of oxycodone and codeine toxicity, the Cook County Medical Examiner's Office said. He was 21. 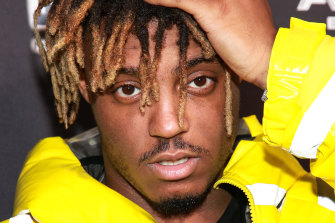 Juice WRLD died of an overdose in Chicago on December 8, aged 21. Credit:SIPA USA

The autopsy findings corroborate law enforcement accounts that Higgins had gone into convulsions while officers searched a private jet that had been carrying the hip-hop star for drugs and guns.

Federal agents gave him Narcan, a drug used to revive people thought to be overdosing on opioids, but he died within a couple of hours at Advocate Christ Medical Center in Oak Lawn, Illinois, the authorities said.

The raid turned up 32 kilograms of marijuana in 41 vacuum-sealed bags and six bottles of liquid prescription codeine cough syrup that were hidden in unmarked luggage, according to the authorities, who said they were tipped off about the drugs.

"The narcotics investigation is still open as we await forensic processing of the luggage to ascertain who the potential owners may be," Anthony Guglielmi, a Chicago Police Department spokesman, said in an email Wednesday.

Officers also said they had found three firearms, including two 9 mm pistols and a .40-caliber pistol, along with metal-piercing bullets and a high-capacity ammunition magazine when they searched the Gulfstream jet on which Higgins had arrived from Van Nuys, California.

Two men identified as security guards for Higgins were charged with illegally possessing guns and ammunition.

Higgins vaulted to stardom on SoundCloud, a popular music streaming service. He first started posting songs online that he had recorded directly onto his cellphone while in high school in 2015.

By 19, Interscope Records signed him, and his profile rose with Lucid Dreams, an interpolation of Sting's 1993 hit Shape of My Heart.

Drug use was a common thread in Higgins' music, including in the song Hurt Me.

The rapper's lyrics proved darkly prophetic. In 2018, Higgins released the song Legends after the deaths of two of his musical contemporaries, XXXTentacion and Lil Peep.

"They tell me I'ma be a legend/I don't want that title now/'Cause all the legends seem to die out," he sang.

Related posts:
01/23/2020 Lifestyle Comments Off on Juice WRLD died of accidental overdose during drugs and guns raid
Recent Posts
We and our partners use cookies on this site to improve our service, perform analytics, personalize advertising, measure advertising performance, and remember website preferences.Ok