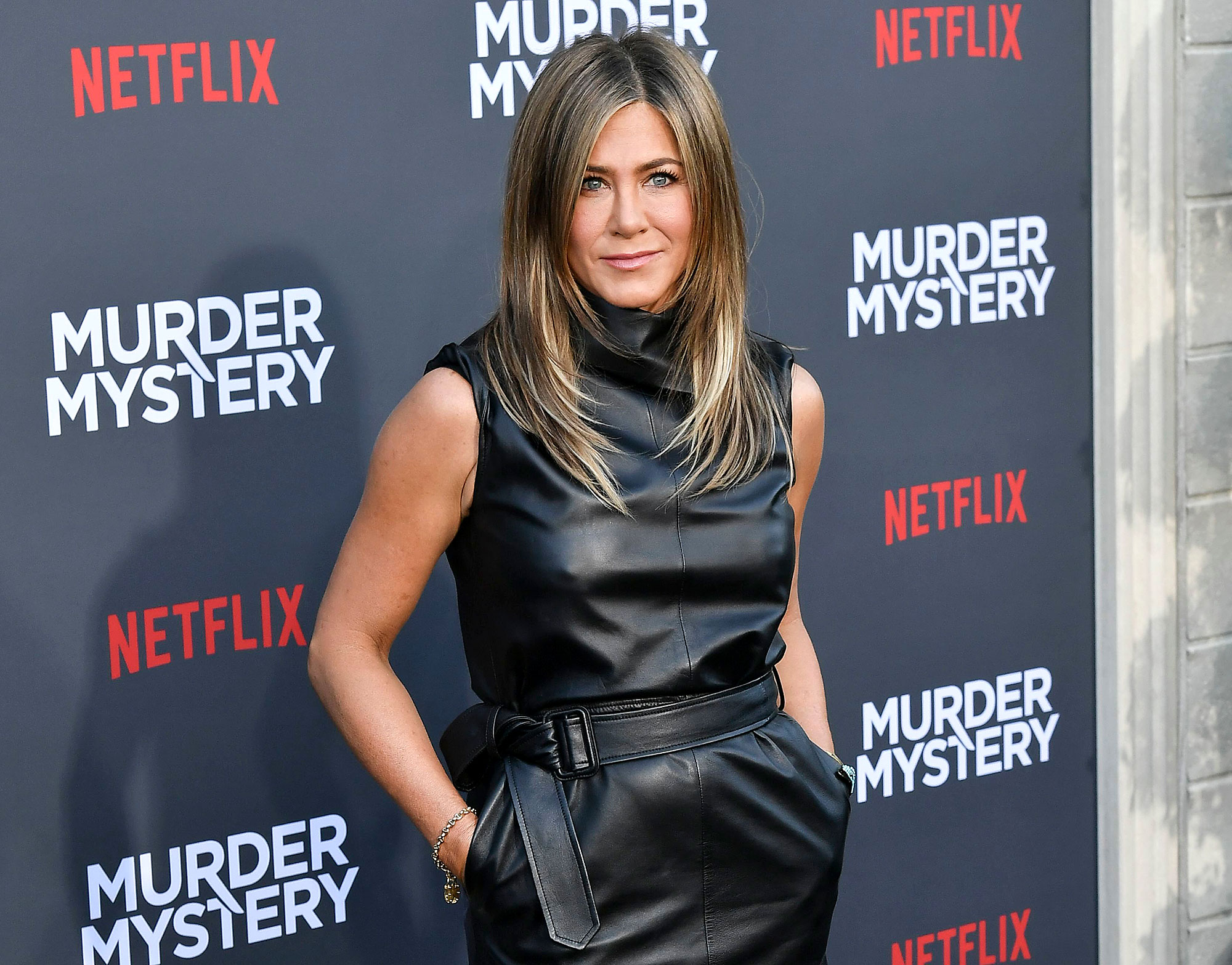 Jennifer Aniston is hotter than ever. The actress showed off her killer body on the cover of Allure, leaving Us shook.

Jennifer Aniston Was ‘Trying to Get Pregnant’ With Past IVF Journey

For the publication’s December 2022 issue, which was published online Wednesday, November 9, Aniston, 53, looked unreal in a tiny black bikini top by Chanel.

The sultry piece, which was originally worn by supermodel Stella Tennant on the spring 1996 runway, features rounded coverings embroidered with the fashion house’s signature double c logo. On the cover, the Friends alum wore the look with string bottoms by Gucci, which were slightly covered by a figure-hugging Saint Laurent skirt.

Adding even more drama, Aniston donned dramatic lashes, heavy eyeliner and long blonde hair extensions, which cascaded down her waist. Inside the issue, Aniston was just as breathtaking. In one shot, the Morning Show star dazzled in a revealing Aisling Camps dress that exposed her sides. For a different spread, the Murder Mystery actress looked edgy in a pair of baggy Balmain pants that were accessorized with a massive Dior belt. 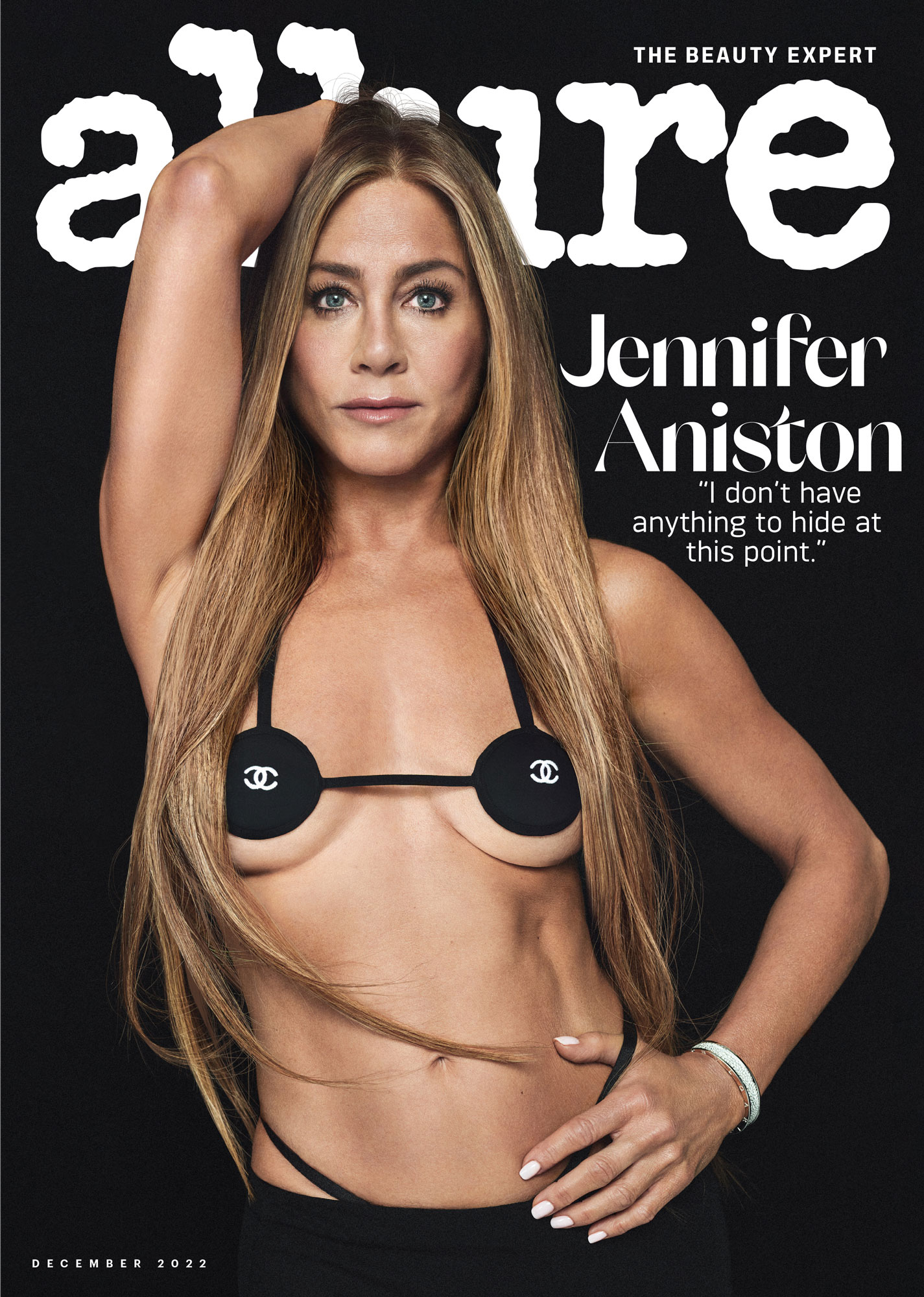 Like her photos, Aniston bared all in the interview. “I would say my late 30s, 40s, I’d gone through really hard s–t, and if it wasn’t for going through that, I would’ve never become who I was meant to be,” she told the magazine. “That’s why I have such gratitude for all those s—tty things. Otherwise, I would’ve been stuck being this person that was so fearful, so nervous, so unsure of who they were … And now, I don’t f–king care.”

She also opened up about her past desire to have children.

“All the years and years and years of speculation … It was really hard,” Aniston explained. “I was going through IVF, drinking Chinese teas, you name it. I was throwing everything at it … I would’ve given anything if someone had said to me, ‘Freeze your eggs. Do yourself a favor.’ You just don’t think it. So here I am today. The ship has sailed.”

The Emmy winner also shut down rumors that she wouldn’t have a child with Brad Pitt. “I just cared about my career. And God forbid a woman is successful and doesn’t have a child,” she continued, referring to her marriage with the Fight Club actor, 58. “And the reason my husband left me, why we broke up and ended our marriage, was because I wouldn’t give him a kid. It was absolute lies. I don’t have anything to hide at this point.”

Aniston and Pitt started dating in 1998 and tied the knot two years later. The former couple announced their split in 2005 after five years of marriage. Pitt, for his part, started dating his Mr. and Mrs. Smith costar Angelina Jolie. The pair, who share kids Maddox, 21, Pax, 18, Zahara, 17, Shiloh, 16, and twins Knox and Vivienne, 14, called it quits in 2016 after two years of marriage.

Jennifer Aniston and Justin Theroux: The Way They Were

Aniston went on to marry Justin Theroux in 2015 but the duo separated two years later. The two have remained close friends, however, as Aniston mentioned to Allure that he “came over [the other day].”

Theroux, 51, spoke highly of his ex in an interview with Esquire in April 2021. “We don’t talk every day, but we call each other. We FaceTime. We text … Like it or not, we didn’t have that dramatic split, and we love each other. I’m sincere when I say that I cherish our friendship.”