Of all the acts left high and dry by this week’s Bluesfest cancellation, veteran Sydney blues singer Sally King has more reason than most to be disappointed.

Not only is this the second time King, 66, has had her Bluesfest gig cancelled, the band she was to front, Pacey, King & Doley, was also formed specifically to play at Byron Bay and to announce her return to the music scene. 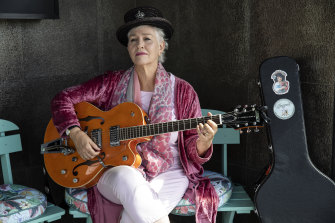 Sally King is hoping third time will prove a charm for her at Bluesfest.Credit:Natalie Grono

“I was invited to be part of the band at the end of 2019 with a view to performing at Bluesfest,” she says. “I was kind of semi-retired so I jumped at the opportunity.

“Bluesfest was going to be the kick-off point. We wanted to see how people responded. It was all about going to Byron, putting on some great shows and showing people something special is going on.”

She recalls the day she found out Pacey, King & Doley had made the cut for the 2020 Bluesfest, just a couple of months before the pandemic shutdown.

“I was so excited. It was a dream come true,” says King, who began her career in 1978 and has sung with and alongside legends including Joe Camilleri and the late Jackie Orzasky. “To me, Byron Bay Bluesfest is the pinnacle – it’s like bandcamp for musicians.”

The first cancellation came as a blow but King and her bandmates were guardedly optimistic that they would get to Byron this year once they heard their contract had been re-signed.

“We were hopeful even up until Wednesday when we were driving up that it would still go ahead,” says King. “Then we heard it had been cancelled. Initially, I was philosophical but as the day wore on it hit me more and more.”

However, King is optimistic third time will be a charm for Pacey, King & Doley and that rumours Bluesfest will finally go ahead later this year will turn out to be true.

“I’m not giving up,” she says. “Hey, I’ve got my outfits all ready. I’m 66 and I’d bloody better get to Bluesfest before they have to wheel me on stage!”

04/01/2021 Lifestyle Comments Off on ‘I’m not giving up’: Veteran muso singing the blues over Byron bust
Recent Posts