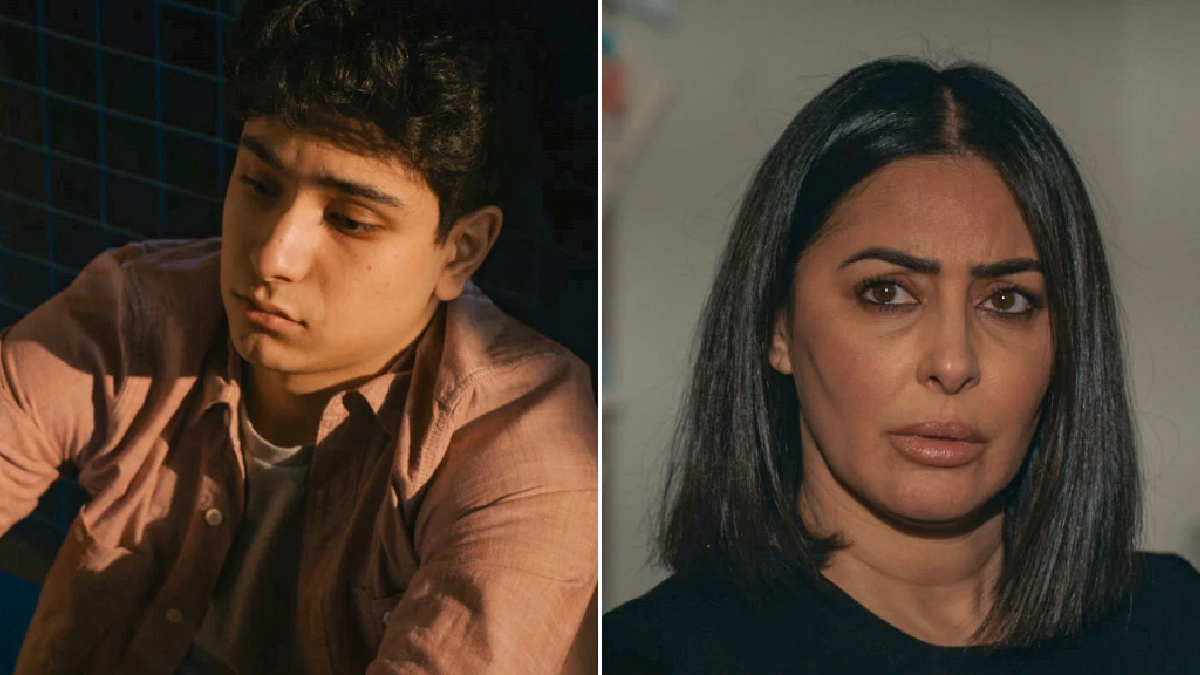 In tonight’s Holby City we saw Henrik Hanssen (Guy Henry) once again having to come face to face with Reyhan Shah (Raad Rawi), the man who abused him as a child. Reyhan was brought into the hospital after the stitches from his earlier surgery burst, possibly self-inflicted by Reyhan as a way to get at Hanssen. He set about trying to undermine Hanssen’s confidence in his accusations ahead of the upcoming court case.

He said that Hanssen was ‘desecrating a beautiful memory,’ disgustingly calling Hanssen ‘a lover spurned’ because Reyhan had moved on to abuse other boys. Hanssen was strong in his own defence, though you could see the emotional toll this is all taking on him. ‘I will accuse you as the pederast you are,’ he said.

It was the arrival of Sahira (Laila Rouass) and her son Abs (Ali Hadj-Heshmati) that changed everything. In a scene between Abs and his grandfather, Abs was revealed to also be a victim of Reyhan’s abuse. ‘This is our secret,’ Reyhan warned him. Abs was angry at Hanssen, blaming him for accusing his grandfather. ‘He’s innocent. It isn’t abuse,’ he insisted – and Sahira picked up on his words, realising with horror that her son had also been groomed and abused by her father. Hanssen, full of kindness and understanding, told Abs that Reyhan had reeled them both in. ‘You share that special secret because “no one will understand,”’ he said.

Whether facing up to Reyhan in court would have helped Hanssen to heal we’ll never know, as Reyhan unexpectedly died at the very end of the episode – another shock twist in what has been a harrowing and emotional story.

Meanwhile, Sacha (Bob Barrett) and Dom (David Ames) had devised a way they could get Dominic’s surgery done. Dominic would pretend he was in terrible pain, Sacha would pop him in for some exploratory surgery and while he was there he’d reverse the stoma. What could possibly go wrong? In a word – Ange (Dawn Steele). She knew exactly what they were both up to, but in the end she was persuaded to assist when Dominic told her how much the stoma had impacted on his wellbeing after decades of building up his confidence. ‘This has taken it all away,’ he said.

For some reason Ange got Josh (Trieve Blackwood-Cambridge) and Jeong-Soo (Chan Woo Lim) to assist in the surgery and Jeong-Soo was fairly sure it was too soon to be even thinking of a stoma reversal. That could be an issue if there’s any kind of investigation about the whole thing which, considering new CEO Fletch (Alex Walkinshaw) turned up just as they were leaving theatre, appears to be on the cards.

When Fletch became King of Nurses he didn’t initially take very readily to being in a position of power and having to wear a suit. As he makes the tricky transition to being CEO he could perhaps hold on to that memory to get him through the difficult early days, the nurses with justifiable grievances and the 243 emails that were waiting for him.

Will he be aided or hindered by new Director of Funding (have we had one of those before?) Jeni Sinclaire (Debra Stephenson)? It looks like she’s going to maintain a tight grip on the hospital’s purse strings and may also have her eye on getting a tight grip on the CEO – she’s already invited Fletch out for a drink.

And is Lucky Simpson (Vineeta Rishi) harbouring romantic ideas about Kian Madani (Ramin Karimloo)? She wouldn’t be the first, and she does have a bit of a spring in her step when she’s bringing him his medication. His withdrawal is going well, apparently, although he’s now invited drug mule Andrei Tarpov (Sonny Poon Tip) to come and stay with him while he hides out from the nasty people who made him be a drug mule in the first place.

Sue Haasler is the author of five novels and the official BBC Holby City book, which you can read about here.