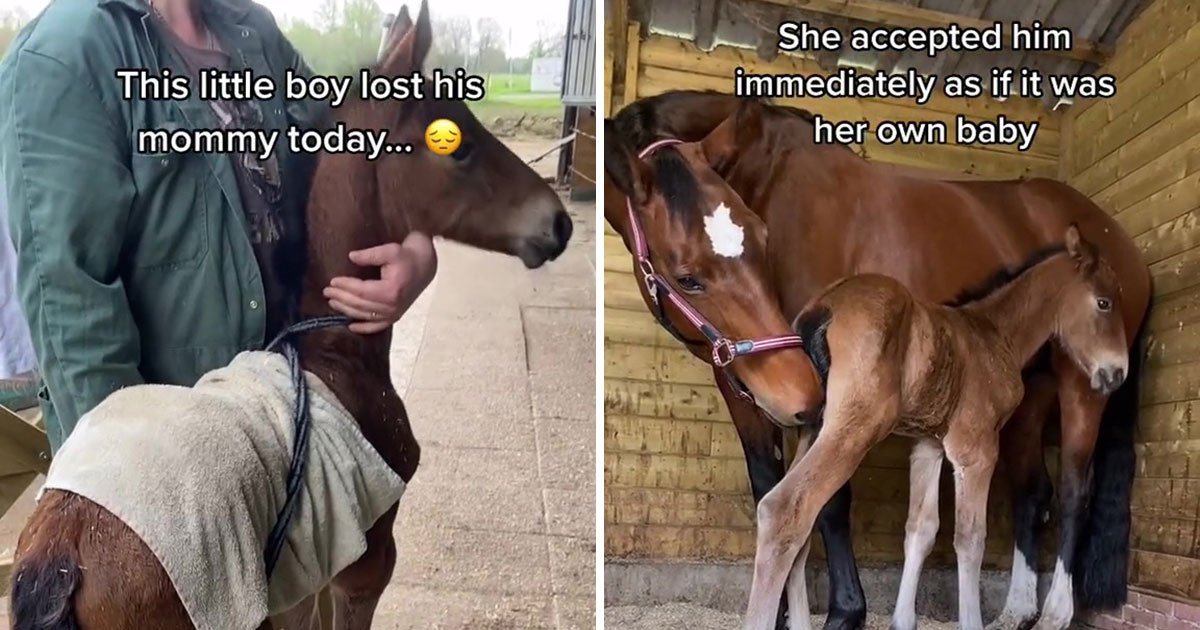 A heartbroken horse has adopted a malnourished foal days after experiencing her own stillborn birth.

The mare, named Citty, sadly lost her foal at birth but her owners Iris and Sanne decided to put her forward as a foster mother.

The foster foal in question is a male whose mum had died as a result of colic. In the aftermath, he was left malnourished and weak, and in desperate need of care.

Iris and Sanne documented the process on their TikTok page @equitality in a video that has now been viewed over 8.2 million times.

In it, Iris and Sanne explained that Citty had lost her first foal two months early.

‘We wanted to offer her as a foster mother,’ they wrote.

The video then showed clips of the young male foal who Iris and Sanne said had just lost his ‘mommy.’

‘He was already weak and asap needed a new mommy,’ they said.

Luckily, a bond developed between Citty and the new foal very quickly, with the video documenting special moments of connection between the pair.

‘She accepted him immediately as if it was her own baby,’ said Iris and Sanne of the mare.

With the new love between mum and baby evident, those in the comments expressed their joy at the emotional video.

‘Love this so much, in darkness comes light. Sorry for your mare and her foster baby’s loss but happy they found each other,’ wrote one user.

While one user lamented that Citty’s baby was being cared for in heaven by the male’s mum.

‘The foal’s mother is taking care of the mare’s baby right now,’ she said.

In a later video, Iris and Sanne updated viewers on the progress of mum and baby. The heartwarming clip showed the pair venturing outside together for the first time.

Citty looked on proudly as her foal galloped around the paddocks, demonstrating that he is getting back to full health.

‘They love each other so much,’ wrote their ecstatic owners.

We wish nothing but the best for the new mum and son.

Send us an email at [email protected]