There are moments during an episode of The Casketeers when it’s easy to believe you’re watching one of the brilliant deadpan comedies that New Zealand has become so good at churning out. The comic possibilities in a funeral home are obvious, and at times this show feels like a spiritual successor to Flight of the Conchords and Wellington Paranormal. Generally these moments involve Francis Tipene, proprietor – along with his practically minded wife Kaiora – of Tipene Funerals, who comes across as a kind of sober-suited Zen master. Quietly-spoken, relentlessly calm, and with a philosophical attitude to everything from carpet-cleaning to the eternal mysteries of life and death, Francis is at once the kind of person reality producers are forever seeking – strange and idiosyncratic and completely natural on camera – and the kind of person reality producers hardly ever find: thoroughly decent. 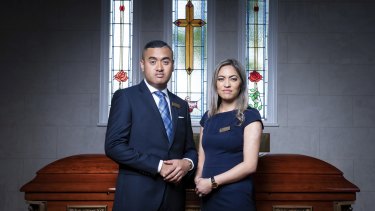 For this is, indeed, a reality show, but one whose nationality is as crucial to its distinctiveness as is the case with the aforementioned comedies. There is something so undeniably Kiwi about the proceedings at Tipene Funerals, something gentle and matter-of-fact and a little eccentric without devolving into the ostentatious “quirkiness” that reality shows from certain larger countries – without mentioning any names – tend to easily fall prey to. There is nothing wacky about The Casketeers: nothing ever feels contrived or gimmicky. And that’s a good thing, because if the reality TV industry ever does to funerals what it’s done to marriage, the collective wave of nausea could be enough to stall the global economy.

That there is humour in a show about funerals shouldn’t really be a surprise: that the humour comes out of the personalities of the people working at the funeral home rather than from awkward jokes about formaldehyde and rigor mortis is a little more unexpected. From certain angles The Casketeers feels like a regular old fly-on-the-wall workplace doco, the banter and bonding between staff sweetly familiar. There’s no need to lay heavy emphasis on the grim business they’re in: it’s always present and adds a piquancy to the comfortable ordinariness of the action.

But from other angles, that very ordinariness shapes itself into something quite extraordinary. A little like its fictional funeral-themed forebear Six Feet Under, The Casketeers has an unsettlingly beautiful knack of switching from wry comedy to heart-rending poignancy in the blink of an eye. After all, we are dealing with death here, and the show does not shy away from the stark reality of the funeral game, nor from the raw pain of the mourners to whom the Tipenes must give comfort. There are scenes that will wring tears as surely as the most sentimental Call the Midwife Christmas special, as well as moments of uplift that leave one wondering how can a show rooted fundamentally in death be such a marvellous affirmation of life?

That magic is created in large part by the cast, led by Francis and Kaiora Tipene. There may be comedy in their navigation of the everyday tribulations of running a funeral business, and in the clash between Francis’ dreamily grand vision and Kaiora’s far more grounded view. But both have a compassionate humanity that shines through as they guide their customers through the most difficult times of their lives, and the joy this team take from their work is enough to inspire anyone to a greater appreciation of the beauty in the world.

Find out the next TV shows, streaming series and movies to add to your must-sees. Sign up to get it every Thursday.