A key plank of the government's plans to recover from the recession is at risk after Labor and the Greens banded together to try and protect the jobs of older workers.

Senate amendments to the JobMaker scheme that pays employers who hire new staff aged under 35 years were rejected in the lower house on Wednesday morning. 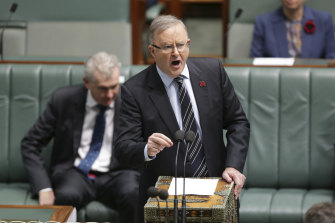 The $4 billion program applies to new hires made from the day after the budget, October 7, and over the next year, although payments won't be made until February.

Under the plan, employers would receive $200 a week if they hire someone aged between 16 and 29, and $100 a week for those aged 30 to 35. The new employees must be additional to the existing staff numbers and the total payroll must increase.

But Labor argues it would allow businesses to sack people aged over 35 and take on two younger workers in their place.

It joined the Greens, One Nation and independent senators Jacqui Lambie and Rex Patrick to change the laws to say businesses which sack an employee in order to take on someone eligible for the payment will not get any money.

"I say to the government, if this legislation is seriously about additional employment rather than about replacing existing workers, they have to support this amendment," Opposition Leader Anthony Albanese told Parliament on Wednesday morning.

The government argues it has ample protections for older workers in the scheme.

"A business will not be able to sack somebody and replace them with somebody else, or multiples of somebody else, because in the end both the total number of employees and the total payroll need to increase for an employer to be eligible under this scheme," Finance Minister Simon Birmingham told the Senate.

Treasurer Josh Frydenberg said the government would continue to seek to pass the bill.

11/15/2020 Lifestyle Comments Off on Government’s youth hiring subsidy at risk in parliamentary stoush
Recent Posts
We and our partners use cookies on this site to improve our service, perform analytics, personalize advertising, measure advertising performance, and remember website preferences.Ok