‘You don’t know how c*** you are!’ Gordon Ramsay unleashes one of his famously fiery rants on another aspiring TikTok chef – calling his microwaved sweet potato mash meal ‘so bad’

Gordon Ramsay has unleashed one of his famously fiery rants on another aspiring  TikTok chef as he called his microwaved sweet potato mash meal ‘so bad’.

The celebrity chef, 53, who is currently staying in the Cornwall home he shares with wife Tana, 45, and his five children aged between one and 22, has been taking to the social media app to offer advice to those hoping to pursue a career in the kitchen.

In his latest hilarious video, the foul-mouthed chef slammed a home cook whipping up a ‘quick and easy’ sweet potato mash.

Gordon blasted the chef for cooking his sweet potatoes in the microwave before calling the dish ‘so bad’, and singing: ‘You don’t know how c**** you are!’ 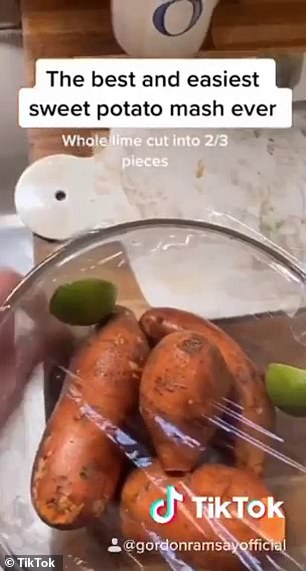 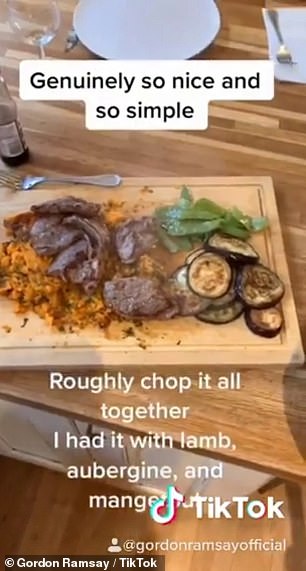 Gordon Ramsay, 53, who is currently living in Cornwall, has taken to TikTok to jokingly criticise home chefs , including one who shared a sweet potato mash recipe 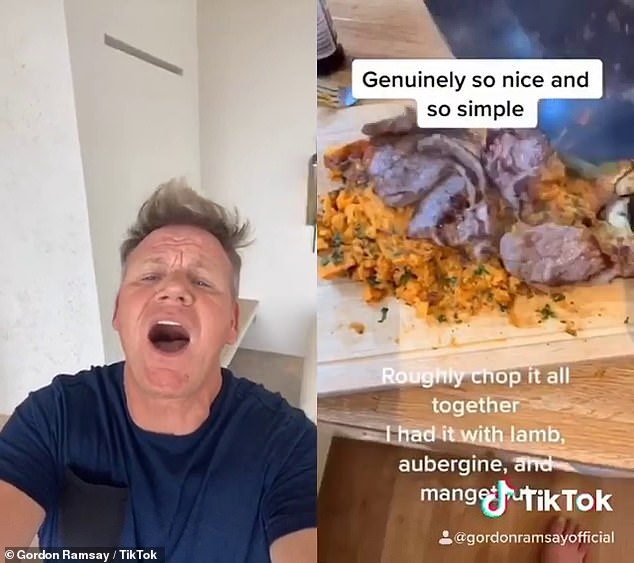 In the hilarious clip, Tiktok user Oliver Jack, from London, can be seen throwing together a quick and easy sweet potato mash.

The user, who posts using the handle @elburritomonster, called it the ‘best and easiest sweet potato mash ever.

He started the recipe by washing the vegetables before throwing them into a bowl with a whole lime cut into three wedges.

Reacting to the video, Gordon could be seen pulling disgusted faces and appeared aghast as he exclaimed: ‘What are you doing? ‘ 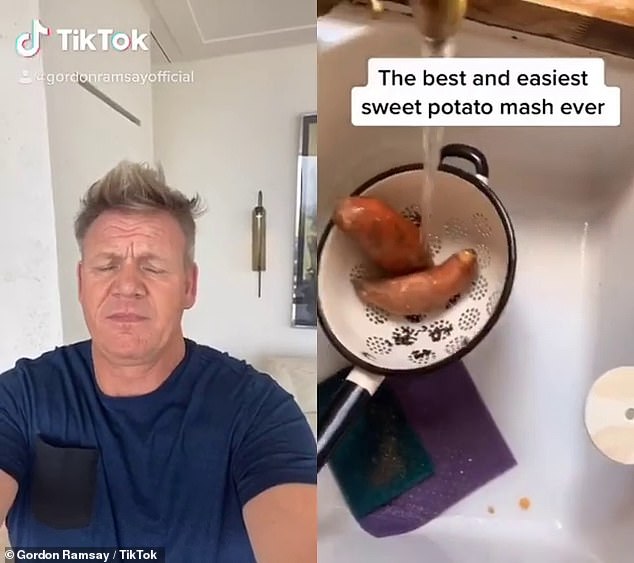 The 53-year-old, who is currently living in Cornwall, initially appeared aghast by the home chef’s attempts to wash and clean his sweet potatoes 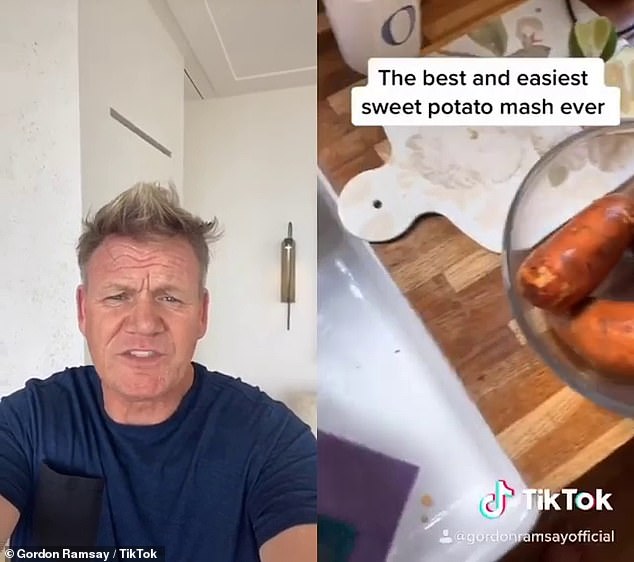 While the home chef promised to share the ‘best and easiest sweet potato mash ever’, Gordon appeared unimpressed by his efforts 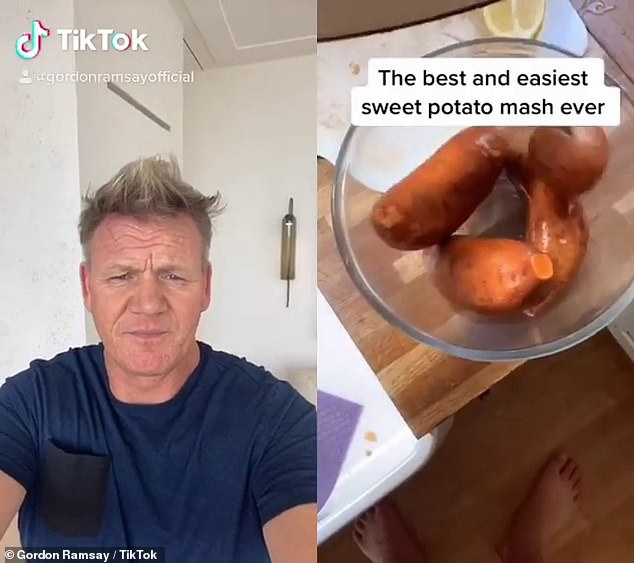 Meanwhile Oliver then told viewers to ‘cover with cling film’ before microwaving at 800W for 12 minutes.

But the television-chef wasn’t impressed by this either, shouting: ‘Urgh, no microwaves!’

The chef went on to roughly chop a ‘big bunch’ of coriander, adding a splash of soy sauce, 2 tbsp of mango chutney and seasoning with salt and pepper.

He then ‘chops the whole thing up and said the side was best served with lamb, aubergine and mangetout. 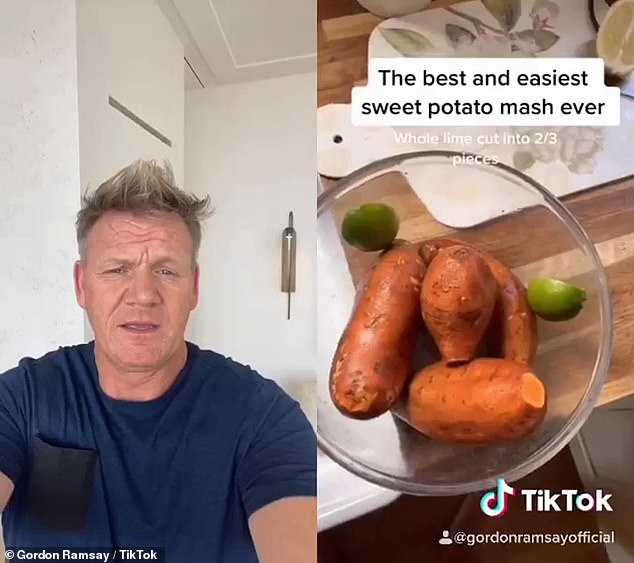 The television chef appeared astonished when Oliver added the limes into the bowl and exclaimed: ‘What are you doing?’ 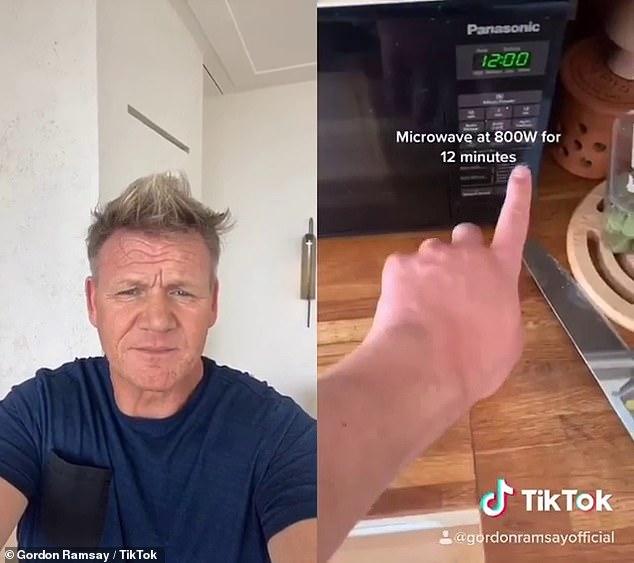 Meanwhile the use of a microwave also infuriated the television chef, who appeared aghast and shouted: ‘No microwaves’ 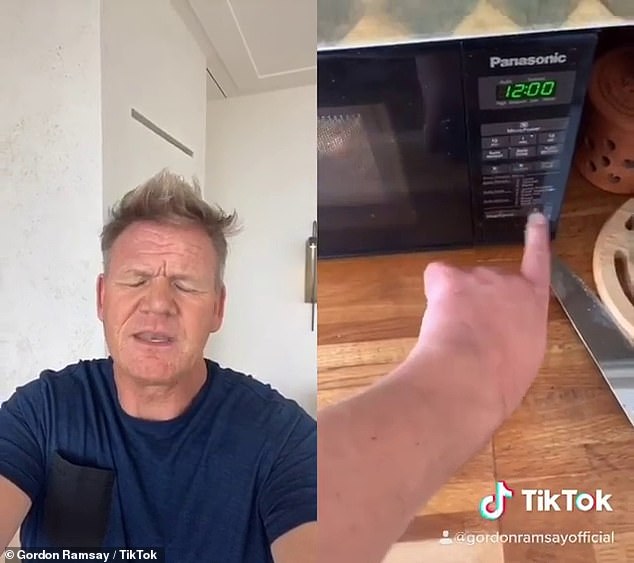 However despite Oliver calling the recipe ‘genuinely so nice and simple’, Gordon revealed he wasn’t impressed with the  dish, singing: ‘You don’t know how cr** you are!’

TikTok users were left in hysterics over the clip, with many commenting laughing emojis on the post.

One commented: ‘Gordon is trying so hard not to cuss.’

Another wrote: ‘The cooking was so bad it made Gordon Ramsay want to switch careers to being a singer.’ 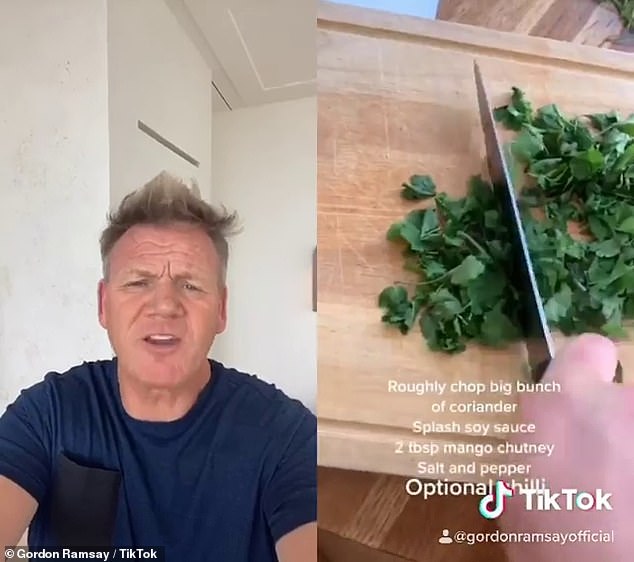 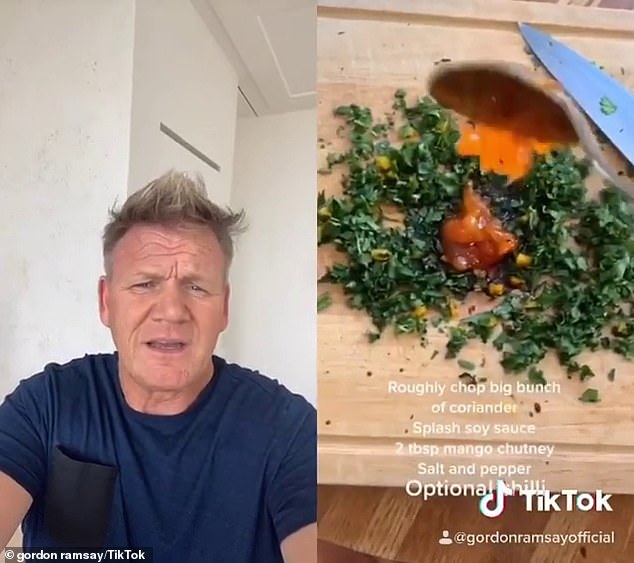 While Oliver recommended adding mango chutney, soy sauce and seasoning to the coriander mix, Gordon could be seen shaking his head 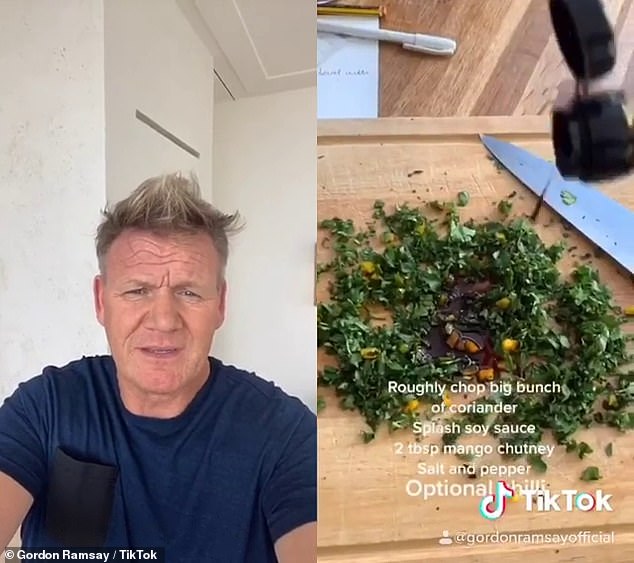 The video is just the latest in a series of videos shared by Gordon jokingly criticising home chefs.

In one clip, personal trainer David Templer, from Highgate, London, who describes himself as the ‘shirtless chef boy,’ can be seen rustling up his own version of Ikea’s Swedish meatballs, while topless.

He excitedly commentates as he cooks 20 Waitrose essential beef meatballs in a pan with no seasoning, before whipping up a sauce separately, which Gordon quickly says bears a resemblance to ‘wallpaper paste’.

‘Chuck your meatballs in, once they’ve browned turned your heat right down and crack on with the sauce,’ David explains. 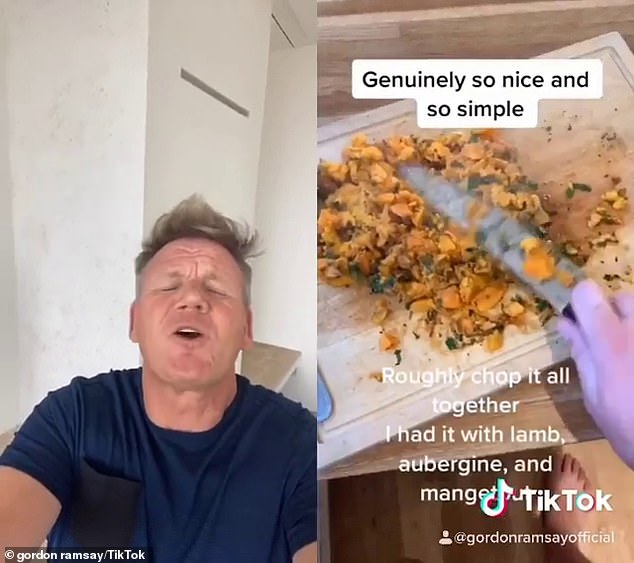 While the home chef mashed together the sweet potato and the coriander mix, the television chef could be heard singing: ‘You don’t know how c*** you are!’ 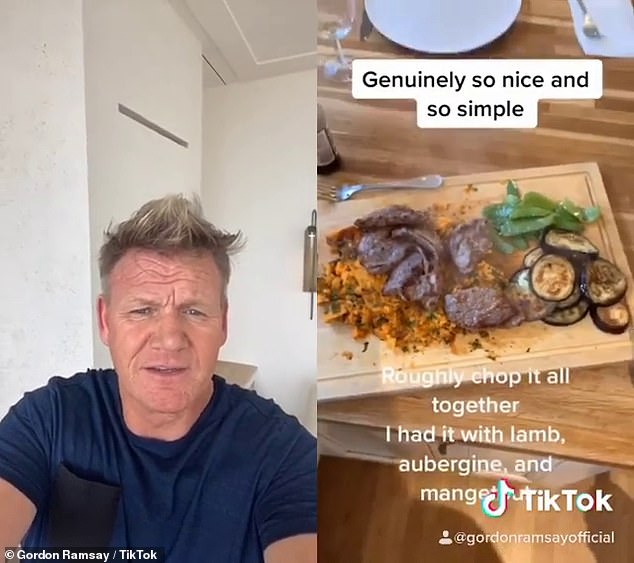 Upon Oliver advising viewers to serve the sweet potato mash with lamb, aubergine and mangetout, Gordon could be heard calling the meal ‘so bad’

He then adds 40g of butter to 40g of plain flour and whisks it together, causing Gordon to profane and declare it’s far too much flour.

Finally, he whisks in soy sauce, Dijon mustard and salt and pepper.

‘Stop it, cook out the flour, you doughnut,’ Gordon says, reacting to the video.’ 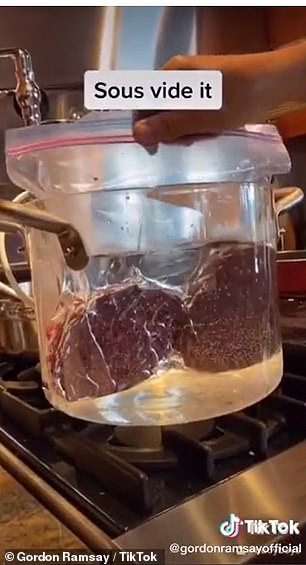 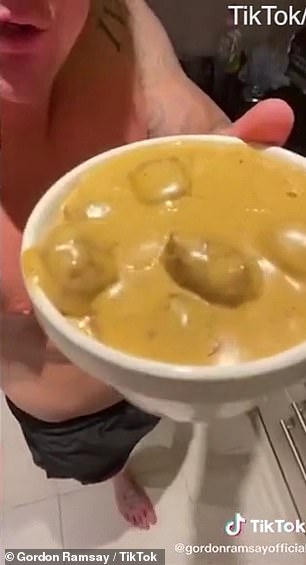 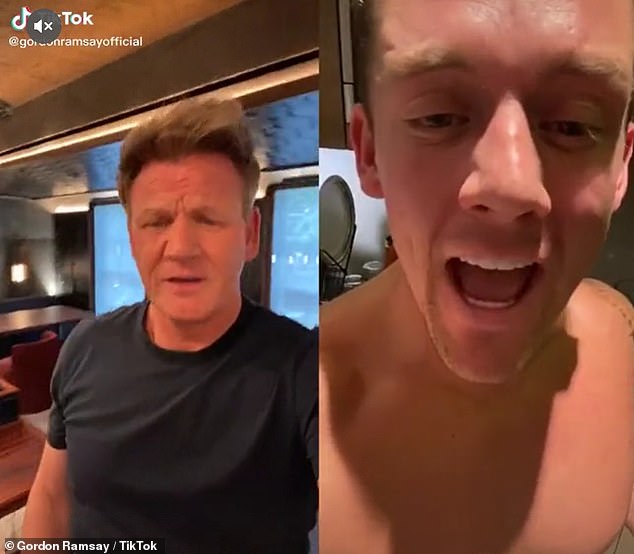 In one clip, personal trainer David Templer (right), from Highgate, London, shares a video describing himself as the ‘shirtless chef boy’ while cooking up his own version of Ikea’s Swedish meatballs. Gordon is pictured left 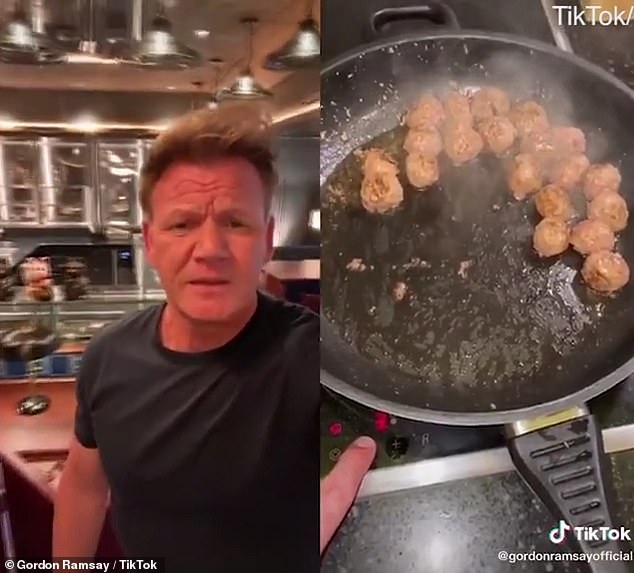 In the video, David excitedly commentates as he cooks 20 Waitrose essential beef meatballs in a pan with no seasoning 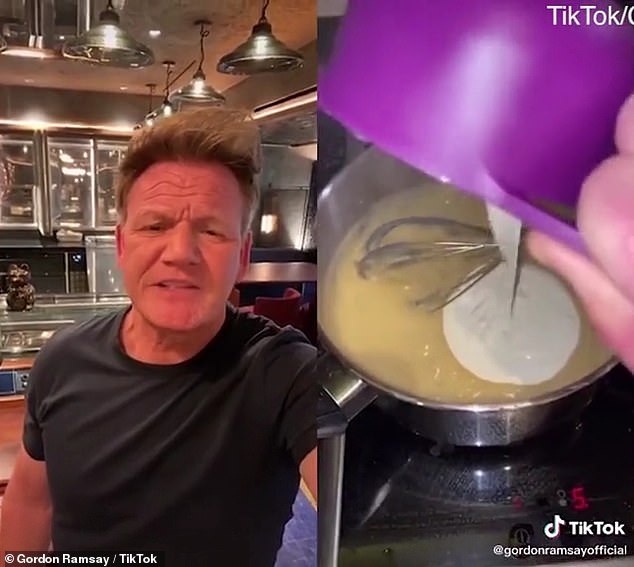 David adds 40g of butter to 40g of plain flour and whisks it together (right), causing Gordon (left)  to profane and declare it’s far too much flour 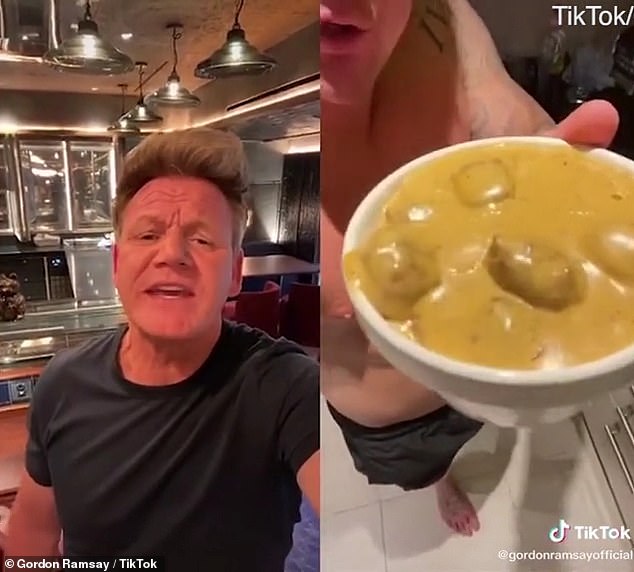 Referring to the wannabe chef’s accent and shouting style, popularised by The Body Coach, he adds: ‘There’s only one Joe Wicks,’

Gordon signs off by poking fun at Jamie Oliver by saying ‘one Naked Chef’ was enough – which refers to the late nineties cooking show that bought his fellow TV cook fame.

Gordon also reacted to a video by Buoy Boys, who tried to make a premium wagyu steak from cheap beef.

In the video, the pair grind down the steak, add gelatin to it, put it in a bag and sous vide it – before grilling it on a barbecue.

Commenting on the video Gordon says ‘it shouldn’t be in a bag,’ before exasperatedly complaining: ‘This is going to be awful,’.

Keeping his famous foul-mouthed rants child-friendly for TikTok’s young users, he says ‘What the frick?’ before comparing the meat to his ‘granddad’s colostomy bag’. 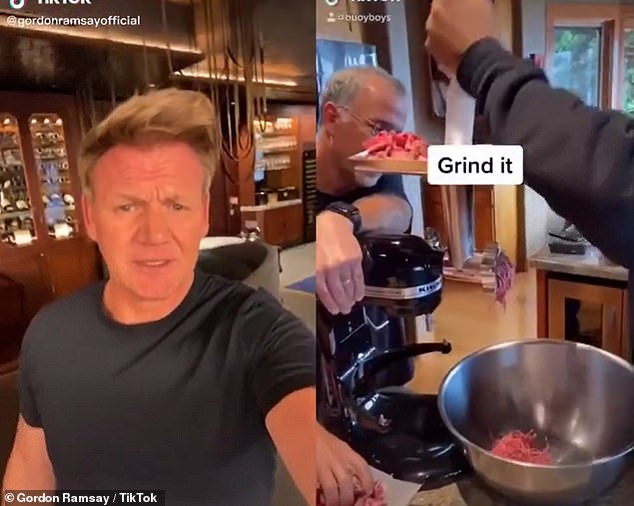 Gordon also reacted to a video by Buoy Boys, who tried to make a premium wagu syteak from cheap beef. They started by grinding it (right) 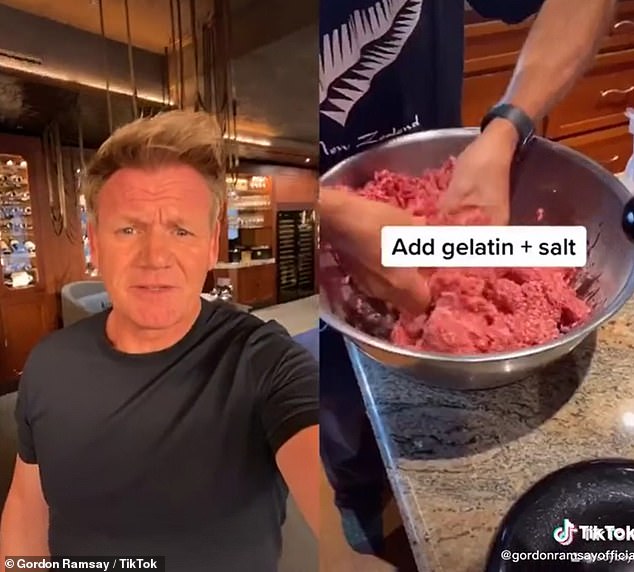 In the video, the pair grind down steak, add gelatin to it, put it in a bag and sous vide it – before grilling it on a barbecue. Gordon was dismayed by the method 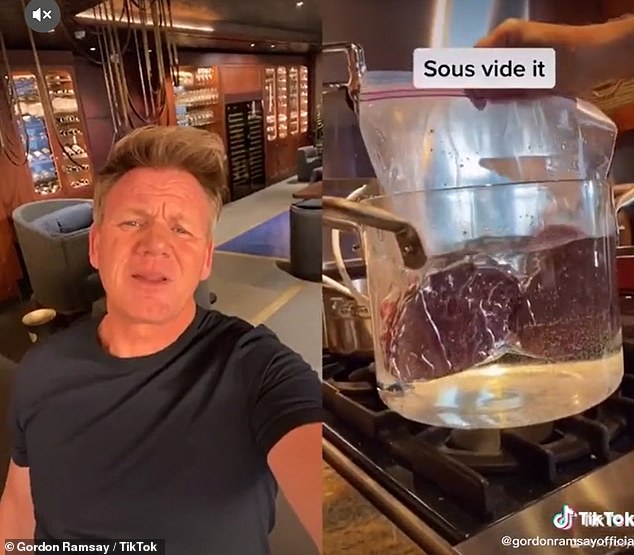 Keeping his famous foul-mouth child-friendly for TikTok’s young users, Gordon says ‘What the frick?’ to describe the cooking method, before describing the meat to look like his ‘granddad’s colostomy bag’

08/07/2020 Lifestyle Comments Off on Gordon Ramsay blasts aspiring TikTok chefs over microwave mash meal
Recent Posts
We and our partners use cookies on this site to improve our service, perform analytics, personalize advertising, measure advertising performance, and remember website preferences.Ok