I am in London, sitting with Bernadette Robinson in the highly exclusive Ivy Club. We are directly opposite The Ambassadors Theatre, in the heart of the West End, where Robinson dazzled audiences earlier this year in her one-person show Songs for Nobodies.

The club is so discreet its entrance is concealed within a flower shop, from where you take a glass lift to the club’s piano lounge. The decor is casually affluent: soft lamps, and lounges scattered with cushions and celebrities. Handsome waiters glide about silently. We order gin and tonics, which arrive with a glass bowl of warm nuts. 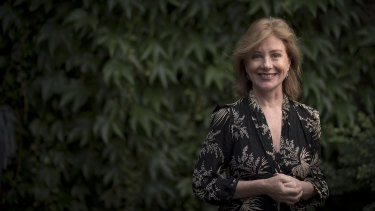 Bernadette Robinson: ”Even when I’m singing as Judy Garland or Patsy Cline, that’s me up there singing and acting.”Credit:Eddie Jim

The show was nominated for an Olivier Award, the most prestigious award in British theatre.

Robinson leans forward. ‘‘I asked one of the waiters here if he’d like tickets.’’ After the performance, back at the Ivy, the waiter introduced his girlfriend. She said, ‘‘You must meet my mum.’’

It was Emma Thompson.

Bernadette Robinson is in her element. Her impersonation of Thompson is pitch perfect. Of course. This is her shtick. She has the best ear for mimicry of any actor I’ve ever met.

Derek Jacobi. Neil from The Young Ones, Helen Bonham Carter. The list goes on. She shows me photos on her phone.

She is so unspoiled, so delighted by it all.

‘‘I love the whole world of it,’’ she says. ‘‘Doing a show. Meeting people afterwards. Coming here. It doesn’t get better than this!’’

One of the theatre patrons who fell in love with Robinson was the Oscar-winning lyricist Don Black, who wrote the lyrics of Born Free. He is best-known for his collaborations with Andrew Lloyd Webber, for several James Bond theme songs, and for musicals.

I wrote to Don Black to ask him what he thought of Songs for Nobodies. He said: ‘‘I am still reeling from her landmark performance. I haven’t been so impressed since I saw Sammy Davis, Jr! … She doesn’t sing songs, she lives them.’’

No wonder Bernadette Robinson is on a high.

Songs for Nobodies began life a decade ago, at the Fairfax Theatre at Arts Centre Melbourne.
It was directed by Simon Phillips, who was enchanted by Robinson’s voice and by her uncanny facility to impersonate the great divas of the 20th century: Judy Garland, Patsy Cline, Billie Holiday, Maria Callas, Edith Piaf. Phillips saw that she needed a vehicle to showcase her acting and singing talent. In short, she needed a story. 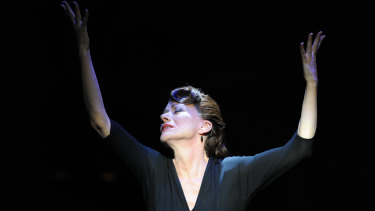 Bernadette Robinson in Songs for Nobodies.

Enter the playwright Joanna Murray-Smith. Robinson specified the singers and the songs she wanted to perform. Murray-Smith dreamed up the scenarios. She came up with a simple and beautiful idea, which is the key to this work. In every scene, a famous singer has an intimate encounter with an ordinary woman. A nobody.

‘‘You’re the nobody,’’ Murray-Smith told Robinson, who swallowed hard and tried not to be offended.

In the opening scene, Bea Appleton is an attendant working in the female lavatories at the Plaza Athenee in New York, when who should come in to use the toilet but Judy Garland. The year is 1961.

Bea recognises her immediately: ‘‘a little doll in kitten heels and theatrical make-up.’’ She also notices ‘‘that her hem had snagged on something and was down at the back’’.

Bea offers to pop in a couple of stitches to catch the hem. And that’s when Judy Garland notices the grief pooling in her eyes.

What follows is an exquisitely female encounter about the fragility of happiness. Robinson plays both women and finishes the scene as Judy Garland singing Come Rain or Come Shine.

I saw that scene 10 years ago. I still remember it.

Bernadette Robinson grew up in Dandenong, the fourth of seven children. Her father was the local GP; her mother, a nurse. She reported that Bernadette was singing before she could talk. She was humming tunes in her cot. At three, she was doing Shirley Bassey – Hey Big Spender.

It was a boisterous family, where the children were always putting on shows.

Bernadette, known to her family as ‘‘Boodie’’, always wanted to be in it. She clomped about in her mother’s nighties and high heels, and asked to be addressed as Mrs Cox.

Although none of the other children were particularly musical, their parents took them to all the shows in town and they had all the records. One time all nine of the Robinsons filed into the dressing room of the singer Suzanne Steele after they’d seen Man of La Mancha.

‘‘How did you get invited into her dressing room?’’ I ask.

The mysteries of childhood.

‘‘My Dad had a crush on the Greek singer Nana Mouskouri. I remember that. He wanted to marry her: ‘I’m just a humble doctor from Dandenong, but I’ve got so much more to offer’.’’

Robinson started her professional life as a nurse at St Vincent’s Hospital. This doesn’t surprise me. Nurses are the best party girls.

But all the time she was nursing, she was thinking: ‘‘This isn’t me.’’

So she became a singing student at the Victorian College of the Arts, where she was taught by Dame Joan Hammond, one of the great opera stars of the ’50s and ’60s. (Dame Joan was also a champion golfer and drove ambulances in London during the Blitz.)

On their first meeting, Dame Joan took Robinson through her scales, and was impressed by the range of her untrained voice: ‘‘I think there’s an E there, above top C,’’ she told her.

Robinson says that Dame Joan was a brilliant teacher, who used imagery to explain what she wanted. ‘‘When a teacher says, ‘lift your soft palate or drop your tongue’, I think, whatttt?’’ Robinson explains. ‘‘Instead, Dame Joan described ‘Filling a big tunnel with sound. No gaps. Just one beautiful solid line of sound.’ Or, ‘When you’re going up, look down, so you’re not reaching for the note.’

‘‘‘Don’t scoop, Bernadette. That’s a bad habit of yours. This scooping. Hit the note on the top!’”
Dame Joan gave instructions on what to do with your body when giving a recital: one hand on piano; one foot in front of the other.

And should you need to kiss, cover your mouth with your hand. This way the audience cannot see there is no actual contact with the lips.

We order another round of G&Ts. I could get used to spending long afternoons in the Ivy.

At the VCA, Robinson also learned languages – French, German, Spanish and Italian – in order to read lyrics and improve her pronunciation.

Her linguistic skill proved invaluable for a show that she and her pianist husband Paul Noonan performed over many years for Qantas. Whenever Qantas launched a service from new destinations, Robinson and Noonan performed a 15-minute set: two songs in the language of the country, followed by Waltzing Matilda and I Still Call Australia Home. Robinson sang in Spanish, French, Cantonese, Hindi and Afrikaans. One time, she sang Click Go The Shears in Mandarin.

She says it worked a treat. The invited audiences were charmed. And she and her husband got to flit around the world, often in first class. Nice work!

‘‘Do I sound shallow? I guess it beats playing a cat, eight shows a week.’’

Now Robinson is returning for a season of Songs For Nobodies. She is excited. ‘‘It’s quite a crowded stage for me. [She plays 10 characters.] I feel they are all with me. It’s never lonely.’’

She enters into a deep communion with these divas. Does she ever feel in danger of losing touch with her own voice?

Robinson is thoughtful. ‘‘Sometimes people say they want to hear the ‘real Bernadette’. And often I do shows where I just sing songs. But even when I’m singing as Judy Garland or Patsy Cline, that’s me up there singing and acting. It’s my voice that’s producing that sound. It’s not a recording.’’

And of course, she’s right. Her performance is full of celebrities. But the star of the show is Bernadette Robinson.

12/05/2019 Lifestyle Comments Off on From Dandenong to the world: Bernadette Robinson’s divas lure the best
Recent Posts