How to change the look of your nose without going under the knife: Experts reveal how to tweak your appearance with clever contouring, derma fillers and thread lifts

With people spending a greater amount of time on video calls during the pandemic, be it a Zoom meeting while working from home or a catch-up with friends, some have found themselves becoming increasingly critical of their appearance – and keen to make a change.

Cosmetic surgeons in the UK and the US have reportedly seen a massive rise in demand for online consultations since the easing of lockdown.

Meanwhile queries relating to rhinoplasty – surgery that changes the shape of the nose – were the most popular cosmetic surgery search term in Europe in the last 12 months.

A report by money.co.uk into the most Googled cosmetic surgeries revealed 34,410 monthly unique searches for rhinoplasty over the past year. Searches for ‘nose job’ made the top 10 separately from ‘rhinoplasty’, with over 19,000 searches individually.

But for those not wanting to go under the knife, there are a number of other ways to change the shape of your nose. Here experts share some of the most popular alternative methods with FEMAIL. 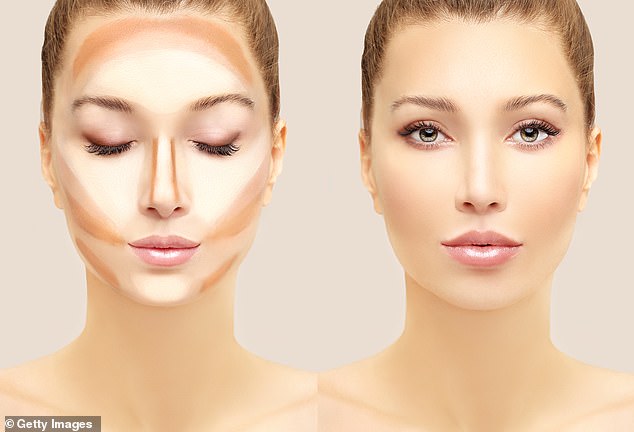 Cosmetic surgeons in the UK and the US have reportedly seen a massive rise in demand for online consultations since the easing of lockdown. Pictured: a woman using contouring to alter the shape of her nose

Using different shades of make-up on the nose can help to create an illusion of a different shape and help to even out bumps, irregularities or a lack of symmetry.

Carly Hobbs, professional make-up artist and tanner, explained: ‘I always embrace any client’s natural nose shape, and really think you should be proud of this key facial feature. However, if you wanted to re-shape it using products, it’s super easy.’

Carly said: ‘The first thing to do is avoid using too much base; work your foundation or tinted moisturiser from the cheeks outwards and then use excess from the brush to work over the whole nose.

‘Add concealer only where any redness is showing, then pat it into place with your fingertips, allowing the warmth of your skin to blend it flawlessly.

‘Next use a cream bronzer with no shimmer over any areas of the nose that you would like to appear smaller or slimmer. Typically, this is down the sides of the nose or across the tip. 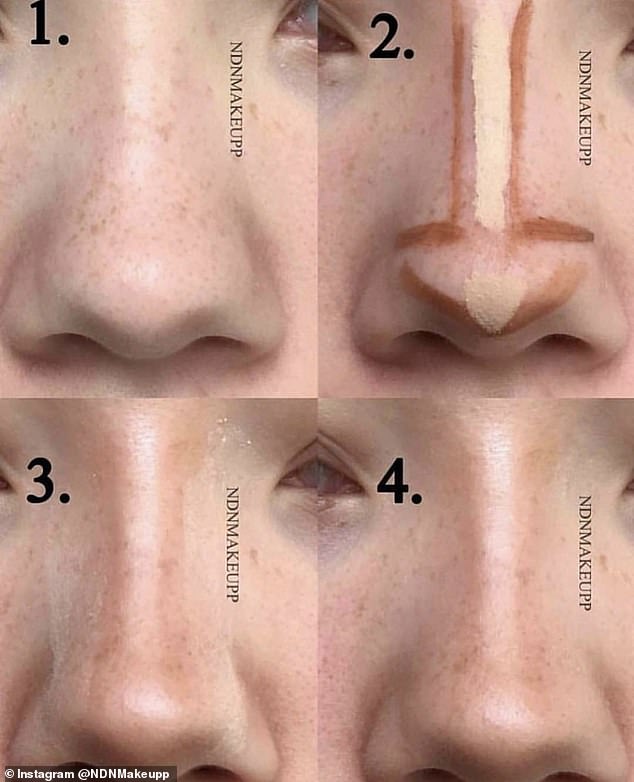 Using different shades of make-up on the nose can help to create an illusion of a different shape and help to even out bumps, irregularities or a lack of symmetry

‘Buff out the shadows you’ve created with a clean, fluffy brush, then check the shape you’ve created. Add more depth where you feel you need it, then set this with translucent powder.’

Carly added: ‘It’s a very common trend now to then add highlighter to the nose, especially the tip. I would say avoid this at all costs, as it draws attention to the nose.

‘If you love this effect and have practised a few times you can carry out the cream bronzer step using fake tan lotions for a more long-term finish.’

Fluid rhinoplasty refers to changes in the shape of the nose without surgery. This procedure usually involves the injection of dermal fillers.

Dermal fillers, such as hyaluronic acid fillers, are injected into different facial areas to gently and effectively reshape the nose.

And because they’re non-surgical, it means less risk, less downtime and usually no side-effects. It takes minutes and is pain free. 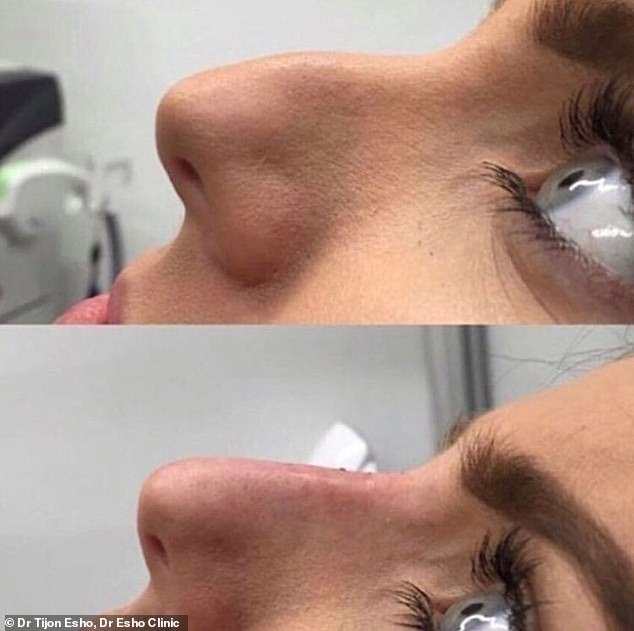 Dermal fillers, such as hyaluronic acid fillers, are injected into different facial areas to gently and effectively reshape the nose

‘Dermal fillers are great at restoring lost volume to your face and plumping up areas that are uneven,’ explained Dr Rekha Tailor.

‘They are also extremely effective for evening out noses that are uneven, hooked or have a bump. By carefully injecting the dermal filler above and below the bump it can result in a nose that looks completely straight.

‘Similarly, filler around the tip of the nose can make it look thinner.’

One theory is that the perfect nose can be achieved with the help of regular facial exercises.

Irene Estry, who has taught facial exercise for 30 years, told FEMAIL: ‘There are 70 tiny muscles in the face, which are attached to the skin.

‘Firstly, use a little moisturiser to prepare the skin; warm your hands and make sure you use just the tips of your fingers gently, don’t pull on your skin.

‘The first exercise that is effective for the nose areas is specifically for the tramline from the corner of the nose to the jaw. For this you need to place your forefinger on either side of your nose. Pull down your mouth so your top lip covers your teeth and tweak your nose, not allowing your face to move.

‘The second exercise to improve the nose is to cover your teeth with your top lip and smile, gently using your forefinger to apply slight pressure, so your cheeks lift.

‘Hold this stretch count to 10 relax than repeat. Both these exercises should be done frequently. They will help to soften and puff out lines in the skin and also fill out the top lip so that the nose looks shorter and neater, and a more youthful appearance is obtained.’

Facial exercises can be carried out anywhere and at any time, but in order to achieve optimum results they need to be done regularly.

At first it can be tricky to master the different exercises, but practising in the mirror initially makes the process easier.

Patients having dermal fillers in their nose are asked to lie down and the surface of the skin will be cleaned.

Using a thin needle, hyaluronic acid filler will be injected into the points on the nose that need more volume. Once it’s been injected it will be moulded and in less than 15 minutes the procedure is done.

Patients are given instructions about what not to do afterwards, for example, wearing sunglasses, sunbathing, sunbeds and intense heat for one week afterwards. You should also wear sunscreen and avoid extreme temperatures. Results usually last between 12 and 18 months.

Thread lifts are often referred to as the ‘lunchtime nose job’ due to their speedy completion and lack of lengthy recovery time.

‘The lifting effect is immediate and discreet as it is the result of compressing and elevating tissue at the time of adjusting the suture. Results continue to improve for six to eight weeks after placement.’

In short, APTOS threads offer a less invasive alternative to a surgical rhinoplasty without the risks and downtime associated with surgery.

Unlike dermal fillers, which can migrate away from the treatment area causing unintentional lumps, the threads are not able to move from their original position, which also reduces the risk of the blood vessels becoming disturbed or damaged.

The threads dissolve completely and safely, meaning the procedure is non-permanent.

The results are significantly longer lasting than dermal fillers with the effects expected to last two years. Plus, the thread encourages natural collagen production, which adds further structure, firmness and contour to the area.

After a thorough consultation a topical anaesthetic will be applied to your skin. Once your skin is suitably numb, your doctor will start your treatment.

The thread procedure involves very fine threads placed within the nose and then pulled gently to reshape the skin.

08/12/2020 Lifestyle Comments Off on Experts reveal how to change the shape of your nose without surgery
Recent Posts
We and our partners use cookies on this site to improve our service, perform analytics, personalize advertising, measure advertising performance, and remember website preferences.Ok