Taylor confronted Brandi for suggesting she cashed in on and "exploited" Russell's death, while Vicki snapped when Glanville told her to "Shut the f— up."

“The Real Housewives Ultimate Girls Trip: Ex Wives Club” reunites former Bravo stars under one roof — and Brandi Glanville got into it with nearly all of them in the first three episodes to drop today on Peacock.

Going into the series, Brandi had lingering issues with Armstrong — with whom she appeared together on the second and third seasons of RHOBH — and Tamra, who she had a Twitter war with on social media.

“My last memories of Brandi were not pleasant,” said Armstrong before they even reunited. “I was going through the absolute worst time in my life. I was filing for divorce and also Russell committed suicide. And Brandi comes along and kicks me when I’m down.”

In July 2011, Armstrong filed for divorce from Russell and cited physical abuse. He killed himself the following month, before the finale for the second season and its reunion were filmed. During the reunion, Brandi criticized Taylor for writing a book about the abuse she allegedly suffered so soon after Russell’s suicide, saying it had “been like a hot minute.” According to Taylor, she and Brandi hadn’t seen each other since.

As for her issues with Tamra, Brandi took issue with Judge saying in an interview that Kelly Dodd was “not stable, she’s like Brandi Glanville.” That led to a nasty back and forth on Twitter and YouTube.

When they all arrived at Dorinda’s home, Tamra, Taylor, Vicki and Brandi sat down together before lunch was served — and it got off to a rough start when Glanville called Gunvalson’s recent ex Steve Lodge “kind of a dick.” It would only continue to go downhill with Vicki from there.

Thankfully, Brandi was able to hash things out with Tamra pretty quickly — with Judge saying she was only saying Kelly and Brandi don’t hold back with their opinions. “You can’t speak about someone and not expect them to react,” Glanville told her, explaining her vitriol at the time. The two then said they didn’t want to fight and hugged it out. 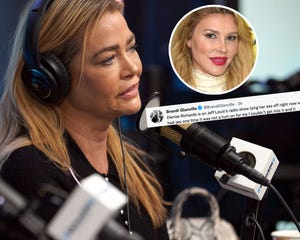 Glanville then pulled Armstrong aside before a big clam bake that first night, hoping they could squash their beef as well.

“That season I came on was the worst time in my life. Like, honestly,” Brandi then said. In a confessional, she explained that she too was going through “an incredibly hard divorce” from Eddie Cibrian, before “a man that I know died and is being accused of beating this person and I’m caught in the middle.” She added, “That was the worst year of my life.”

It seems production relayed that commentary to Armstrong, who was shocked. “This is actually unbelievable that she would really be looking me in the eyes saying that was a really tough year for her. Cry me a river,” she then added.

Brandi then said she couldn’t imagine what Taylor was going through at the time, before asking why she decided to go on a TV show in the first place if she was being abused.

“I don’t know if I was making a conscious decision, but I thought the cameras would protect me in some way. If he was on camera, maybe he would behave,” she said. “I did not want to out it ever. When [Camille Grammer] outed the abuse at [Lisa Vanderpump’s] tea party, I never wanted that to come out, never. I was terrified. He used to tell me, ‘I’m afraid I’m gonna kill you some day.’ The minute it happened, I was in shock. We’re never going to be able to put it back in the box now. It’s done.”

Brandi then made things worse by admitting she wondered how much of what Armstrong alleged was true. “Not that I didn’t believe you, but I didn’t know what was real,” she told her. “Is this girl just here for reality TV and throwing her husband under the bus?”

“That is the most insensitive and horrible thing you can say to someone who’s being abused,” an angry Armstrong said in a confessional. “Maybe she should take a look back and realize I had reconstructive surgery on my face.” 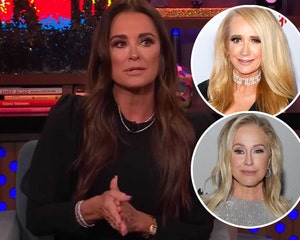 While the conversation kinda ended there and Brandi appeared to feel good about what transpired, Taylor admitted she was “actually more pissed” than she was when she arrived at the home.

Brandi brought up their issues again during dinner, in front of everyone, and once again said it was “the worst f—ing time of my life” and “the worst year of my life” that season. “No, she did,” said Vicki, signaling to Taylor. Tamra was confused too, asking, “So that was a horrible season for you?”

Taylor then brought up how Brandi felt she “exploited” the situation at the time. “In that moment, you kinda did,” Glanville said, doubling down. Armstrong told Brandi that she didn’t know the backstory and instead made assumptions; she then explained that she had “no money” at the time because Russell “hid” it all and she had “no way to take care of myself.” The book was a lifeline, with Taylor saying she “had to get an advance so I could eat and support” daughter Kennedy.

“I did not know that,” said Brandi, before Taylor reiterated, “because you don’t ask questions!” Glanville responded by saying, “Bitch,” before everyone at the table cut her off — telling her she couldn’t refer to any of them in that way. As Vicki tried to interject, Brandi then snapped, “Shut the f— up right now” — which only set off Gunvalson.

The second episode started with Brandi diffusing the situation by saying they should all get naked, before realizing she’s had too much to drink and should probably go to bed. With Glanville gone, Vicki told the others to “keep her away from me,” adding, “I’ll take her down, I’m not putting up with chaos.”

The next morning, Vicki repeated that she was all but done with Brandi at that point, telling Tamra that she didn’t even want to look at her because of “the way she spoke to me.”

“Brandi I was so hoping come on this that you have grown as a woman over the last 10 years,” Taylor then said to her, adding, “Right now, you’re proving you’re the same woman you were 10 years ago.”

Brandi left the room to cool down, with Eva and Phaedra joining her. Eva then explained that the other women clearly perceive the word “Bitches” differently than Glanville does, warning Brandi to “watch your words” with them. But once they went back inside, Glanville couldn’t help herself.

As Brandi and Taylor got into a stupid argument about whether Glanville thought one of the chefs was a lesbian or not — because of “her eyebrows” — Brandi again told Taylor to “Shut the f— up.” With that, Taylor exploded, screaming, “You little f—ing bitch. I am sick of it! I have taken your shit for far too long, you shut the f— up for once!”

In a confessional, Brandi hilariously said she could only think of the “stupid cat meme” when Armstrong was yelling at her — before telling Taylor that she was “poking a bear.”

“I don’t want to have to poke a bear to be a friend with someone. But when it becomes, ‘Shut the f— up bitch,’ the only way I know to come at you is to throw it right back,” Armstrong explained, as they calmed down. “I find it challenging. I know you know how to articulate your words, but you don’t choose to. I’m trying to explain to you what your problems are. I think you trigger me because I see you insecurities and it really bothers me.”

Brandi apologized and then told Taylor she liked how “aggressive” she got when they were arguing. With that, they all called it a night and the second episode ended on a more upbeat note.

The next morning, Brandi and Eva kept bonding, while Vicki was sent off to urgent care with a sinus infection. The women all competed in an obstacle course, with Brandi telling Tamra she was more fun when she’s “not with Vicki.” Of course, Gunvalson didn’t like hearing that when she returned from the hospital, saying she felt like Brandi was simply trying to “divide” the two RHOC costars.

Later that day in the kitchen, as a high Brandi cooked dinner for that evening, she hugged Vicki and said she was “so iconic and legendary” and didn’t want to fight with her anymore. Vicki said she hated fighting, Brandi said she was “very reactionary,” before Gunvalson reiterated that Glanville was “not allowed to talk to me” the way she had the previous night.

“You are never allowed to say shut the f— up to me, ever. I would never say that to woman,” she added. Brandi said she couldn’t make any promises, but would “do my best to not speak to you in that way” going forward. 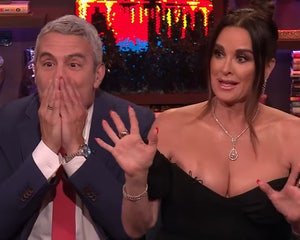 What followed was a lasagna bakeoff and some dirty party games, before Brandi then found a way to tick off both Dorinda and Eva when they started playing another game where the women took turns answering personal questions.

First, as Jill Zarin got one where she was asked to reveal what “disappoints you about your father,” Brandi reminded her that her answer would appear on “national television.” That frustrated Dorinda, who clearly felt Glanville was trying to criticize her game idea.

Then, when Eva started talking about her husband, Brandi said that when the two of them were talking to him over FaceTime earlier, she worried he was going to be a “mangina” — AKA a man with a vagina, or pushover. Marcille was clearly caught off guard by the comment and Brandi couldn’t find the words to explain herself out of it.

“All that’s off. I don’t know about the mangina. I don’t know what a mangina is, it does not sound good,” she said as the two of them stepped outside. “I just don’t want to blow up at her home. Leave my husband and my kids out of it.”

So, if you’re keeping track, in the first three episodes Brandi managed to tick off Taylor, Vicki, Tamra, Dorinda and Eva and even rubbed Phaedra the wrong way with the comments about Marcille’s husband. That leaves Jill as the only one who had no issues … yet.

06/23/2022 Lifestyle Comments Off on Every Fight Brandi Glanville Had with Taylor Armstrong, Vicki Gunvalson In Brutal RHUGT Debut
Recent Posts