Hundreds of elderly hip fracture patients are suffering from undiagnosed delirium every year in Australian hospitals, leaving them vulnerable to serious complications and death.

One in every four hip fracture patients is not being assessed for delirium before surgery, the latest analysis of the Australian and New Zealand Hip Fracture Registry reveals.

Among Australian patients who did undergo cognitive assessment, more than one-third (39 per cent) were diagnosed with delirium, the report found. It is based on 15,300 hip fractures across 93 hospitals in Australia and New Zealand in 2021 and compiled by Neuroscience Research Australia.

“It’s not good enough,” Close said of the proportion of patients screened for delirium. “It should be 100 per cent.”

“Delirium is essentially a brain attack. It’s an acute state of confusion and medical emergency, just like a heart attack,” Close said. 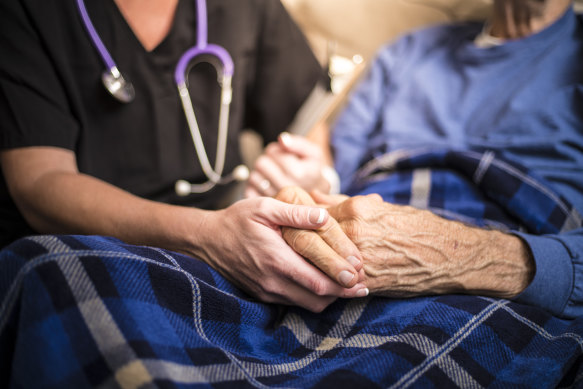 One in every four hip fracture patients is not being assessed for delirium before surgery, new data shows.Credit:Getty Images

“If you fail to pick it up and manage it you end up with patients who will develop things like pressure injuries, malnutrition, pneumonia from lying in bed … and the worst outcome is death.

“The idea that we would admit somebody to hospital, and we wouldn’t check their heart or their lungs is unthinkable, but we don’t afford the brain the same respect for hip fracture patients.”

The Australian and New Zealand Hip Fracture Registry’s annual report is an audit of hip fracture patients. It is made available to hospital administrators to allow them to compare their results against past performance and other institutions, and make any necessary improvements.

There were huge variations between hospitals in assessing patients, with some evaluating every hip fracture patient for dementia to one hospital – St Vincent’s Hospital, Darlinghurst – that assessed less than 5 per cent.

St Vincent’s spokesman David Faktor said reducing the incidence of delirium at the hospital was a key priority and cited two recent audits that found 95 per cent and 73 per cent of patients were screened for delirium respectively.

An estimated 20,000 people fracture their hip each year in Australia and New Zealand. As the population ages, those figures are expected to rise.

President of the Australasian Delirium Association and geriatrician Associate Professor Gideon Caplan said most studies of hip fracture patients estimated 50 per cent develop delirium, some before they were admitted to hospital and others after surgery, as a result of anaesthesia and painkillers.

“It can be horrible for these patients to find themselves in hospital, but they don’t recognise where they are. They can start to imagine that they are being held prisoner,” Caplan said. “They need frequent reassurance, multiple times from the people looking after them.”

Delirium is a major risk factor for dementia. A meta-analysis of hip fracture patients co-authored by Caplan found that the risk of developing dementia was 18-fold among patients with delirium.

“It’s important to treat the underlying cause of delirium as soon as possible, if you can,” Caplan said. “You need to look for an infection – usually a urinary or chest infection – or it might be a sedating medication that is too strong,” he said.

The report found COVID-19 restrictions had significantly impacted care of hip fracture patients, with many orthopaedic wards converted into COVID wards, and limited access to rehabilitation wards and specialist staff who were deployed to other roles during the pandemic.

Close said the restrictions on families visiting patients was a “stark reminder” of the crucial role families play in the care of these people.

“We have underestimated how dependent we are on families and carers when people are in hospital. Things like feeding and encouraging people to get up and walk.”

Most Viewed in National

11/07/2022 Lifestyle Comments Off on ‘Essentially a brain attack’: The hidden toll of delirium on hip fracture patients
Recent Posts