An elegance coach has revealed the dress code rules she believes every classy person needs to follow to avoid looking ‘tacky’.

Anna Bey, who splits her time between London and Geneva, took to YouTube to explain the six mistakes elegant people ‘never make’ when sticking to dress codes.

She said that dress codes are important to ensure guests at various occasions don’t feel like they are ‘sticking out like a sore thumb’ because they are either overdressed or underdressed.

‘They help guide you in the right direction and make you always feel at ease in any circumstances,’ insisted Anna, as she encouraged her 1.42million subscribers to avoid common dress code mistakes.

These include wearing flashy jewellery to a funeral, open toe shoes to an interview, or cut-out and plunging outfits to a wedding.

DON’T WEAR PLUNGING OR CUT-OUT OUTFITS TO A WEDDING 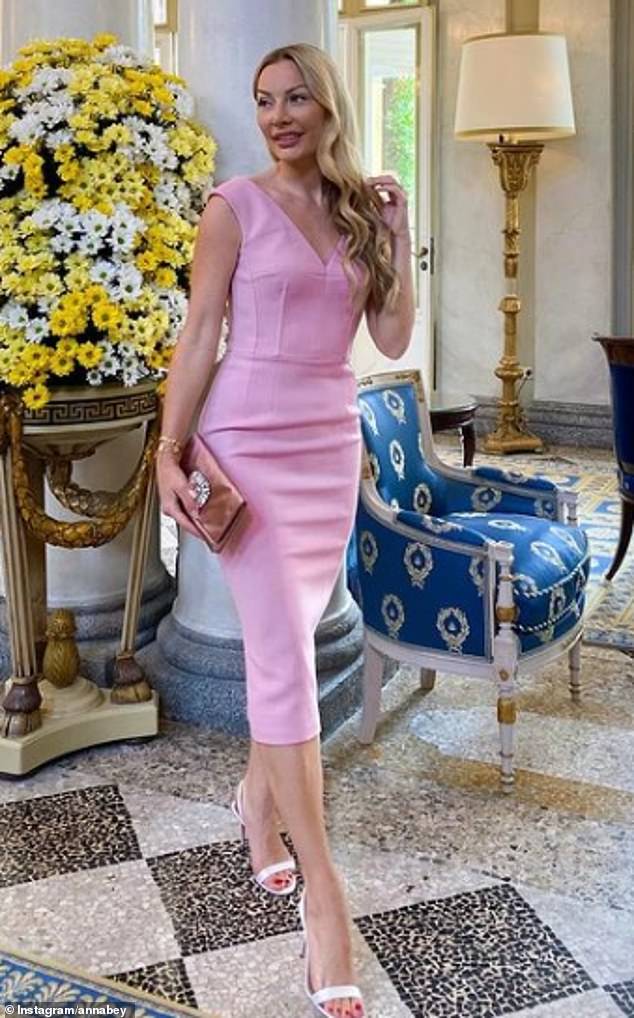 Anna Bey (pictured), who splits her time between London and Geneva, took to YouTube to explain the six mistakes elegant people ‘never make’ when sticking to dress codes

Anna said of wedding dress codes: ‘I actually thought that everyone knew that on weddings, you’re not supposed to wear white or cream colours or anything similar to what the bride is wearing. That is incredibly inappropriate.

‘But there are more things that are also inappropriate to wear to a wedding. A general rule is to never upstage the bride.

‘It’s her day to shine and you don’t want to be the one wearing something where all eyes are on you and not on the bride.

‘For this reason, you should not have a dress that is more flamboyant than what the bride is wearing.

‘You also need to think about that weddings in general are quite conservative, meaning that you have all kinds of people gathered there.

You have also all kinds of generations gathered. You will have someone’s grandparents, someone’s parents, in-laws, you name it. And for this reason, you need to pay attention to what you wear.

‘You cannot put on your sexy show. You have to be mindful that you don’t want someone’s grandpa to be staring down your cleavage, as an example. I would avoid wearing crop tops.

I would avoid wearing dresses that have cut-outs on the side or if they have some form of mesh on the side, short skirts or very deep plunging neck lines.

‘And lastly, on the wedding dress code, if there is a dress code, make sure you stick to it. If the invitation says white tie, that means it’s white tie. Don’t arrive in the cocktail dress.’ 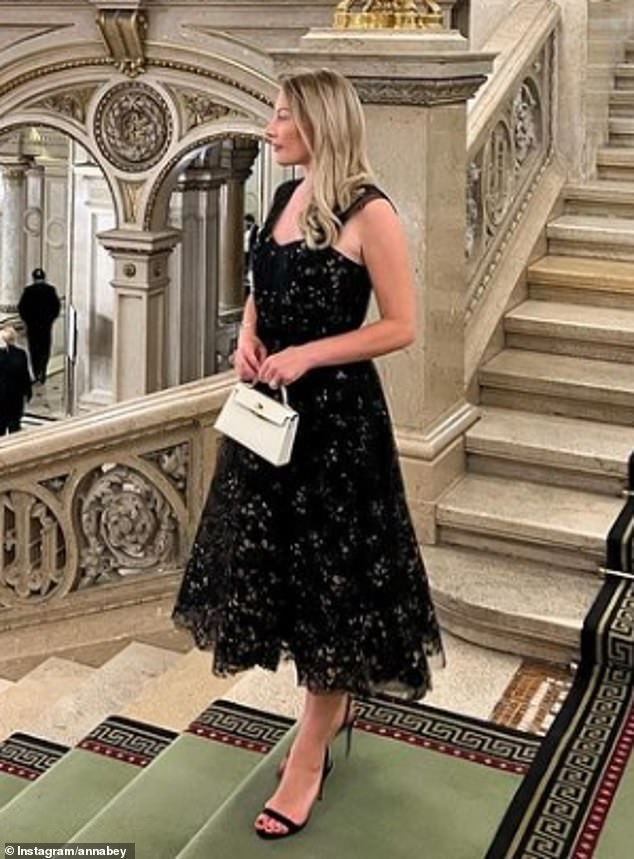 She said that dress codes are important to ensure guests at various occasions don’t feel like they are ‘sticking out like a sore thumb’ because they are either overdressed or underdressed. Pictured, Anna

‘For [high level] job interviews, we would avoid wearing, let’s say open toe shoes. We would instead wear shoes that have a closed toe,’ Anna said.

‘We would also avoid wearing sleeveless tops because it’s important to cover your shoulders. We would also not wear high heels like stilettos. We would wear a lower heel, something a little bit more modest.

The elegance coach said: ‘Unfortunately at some point we all have to attend a funeral and we need to really think about that at a funeral, there is such a thing as a dress code.

‘People don’t always pay attention to this and it’s incredibly disrespectful for the families in particular who are mourning.

‘There are some things that I believe one should never wear to a funeral and that would be mini skirts or mini dresses or anything where you really show off a lot of skin.

‘It’s very inappropriate and especially if the funeral is in some form of a holy place or or a church of some sort, you really have to cover up.

‘Other things that I find very inappropriate is when people don’t make enough effort dressing up to a funeral.

‘Believe it or not, some people come in t-shirts and first of all, it’s very distracting if you wear a t-shirt, not only because it looks very laid back, but some t-shirts even have big graphic prints.

‘Another point to pay attention to, flashy accessories should be kept at a minimum. No matter if you have beautiful jewellery, a funeral is really not the right place to show those things off because you want to be very discreet at a funeral.

‘You want to keep it minimal. You don’t want anything distracting and wearing your biggest diamonds so they sparkle in people’s eyes. I think it’s a little bit on the tacky side, surely you can wear a nice pearl necklace or accessorise a little bit, but just keep it at a minimum and never flashy.’

DRESS TO IMPRESS AT THE THEATRE 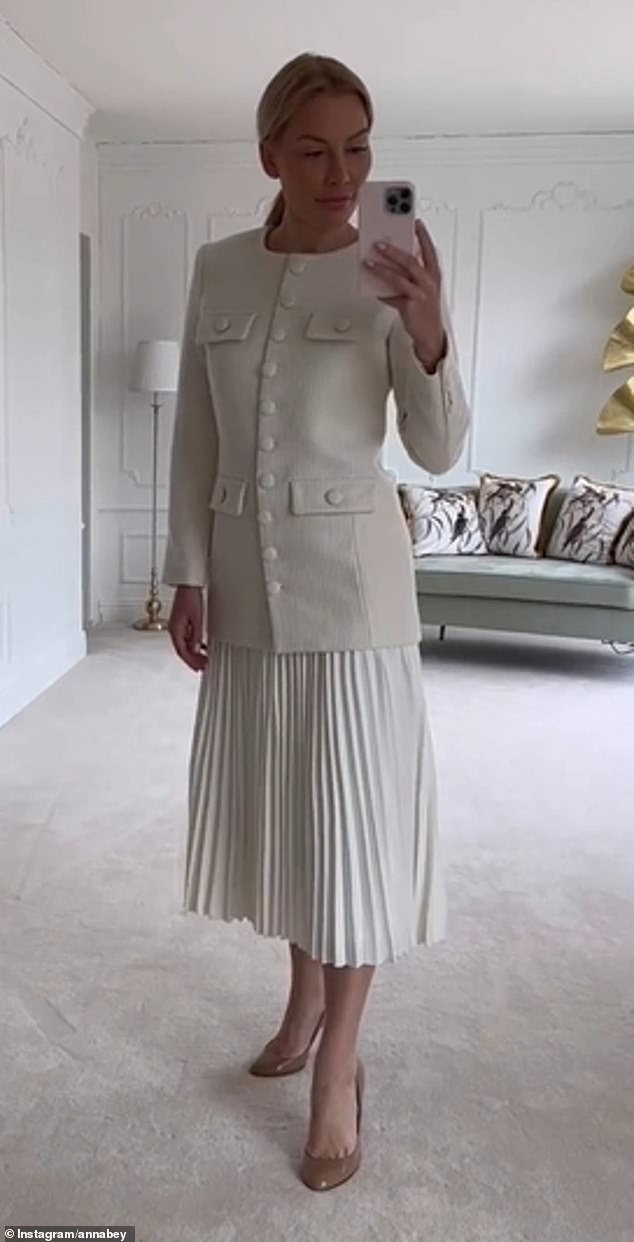 ‘They help guide you in the right direction and make you always feel at ease in any circumstances,’ insisted Anna (pictured), as she encouraged her 1.42million subscribers to avoid common dress code mistakes

Anna explained: ‘Some of you know that I love going to the opera and to the theatre, but oh my, do I feel sometimes a little bit hurt in my eyes when I see what people are wearing to such events.

‘Now let me tell you one thing. Officially, most opera and theatres don’t really have a strict dress code. However, people really let loose these days in 2022 when they go to the theatre, they really don’t care what they wear.

‘And that really makes me so sad because going to the opera, going to the theatre, used to be kind of a special tradition for people.’

Anna added that trainers, shorts, jogging bottoms are all inappropriate theatre attire in her eyes, and a ‘big handbag’ is also a big no-no because ‘it’s going to be in the way for people’.

She added: ‘Since there is no official dress code, I would just really make an effort. I would wear a cute dress that makes you feel put together, maybe with a nice pair of heels.’

DON’T WEAR TRAINERS AND JOGGERS TO A RESTAURANT

WHEN VISITING A HOLY PLACE, ABIDE BY THEIR DRESS CODE

Anna said: ‘There is a dress code for these type of venues… and it is very important that we follow those rules whether we belong to that religion or not. If we are visiting their holy place, then we abide by their rules.

‘I would definitely wear something like a shirt dress because a shirt dress is fairly covering and you can definitely enter a church because your shoulders are covered and then you have a skirt that is minimum knee length.

‘So for me that would be a perfect tourist look that is also perfect for churches.’

‘You have the casual ones and then you have the more fancy high-end ones. And fancy restaurants don’t necessarily have to be Michelin star.

‘I understand that not everybody wants to wear heels and dresses and fancy things, but I think it’s common sense for a man, let’s say if you go out for dinner at night, that at least he wears a shirt to a restaurant and not necessarily some t-shirt or a sweatpants.

‘Or if you are a lady, you would wear at least a little heel or some nicer evening shoes instead of arriving in sneakers. You would also make a little bit of effort, maybe wearing a little dress or maybe a nice tailored trouser of some sort.

‘It’s not about that, it has to be a fashion show. But try to just make a little bit of an effort. This is more of a high-end restaurant, meaning that you should also look a little bit more high-end, not like you are sitting on your sofa at home having a takeaway.’