A High Court battle over taxing electric vehicles will pit the federal government against the states in a constitutional fight that could influence the future of the fuel excise.

All state and territory governments along with the Commonwealth have made submissions in the case, which challenges Victoria’s right to charge zero- and low-emission vehicles a fee for every kilometre driven on public roads. 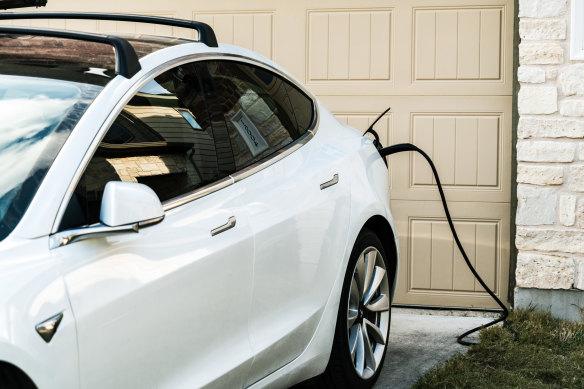 A fight over electric vehicle road user charges will be heard in the High Court in February.Credit:iStock

The High Court in Canberra will hear the largest constitutional stoush in 25 years in February.

If there is a win for drivers Chris Vanderstock and Kath Davies, who brought the case – backed by the Commonwealth – it paves the way for the federal government to implement its own road user tax that could replace fuel excise in the future.

If Victoria wins, backed by every other state and territory, it paves the way for other jurisdictions to introduce their own road user charges for electric vehicles – creating a future headache for motorists, car-hire fleets and trucking companies.

Electric Vehicle Council chief executive Behyad Jafari said a tax on road use needs to come from the federal government.

“It obviously makes far more sense for there to be a nationally co-ordinated scheme than to have states going it alone,” he said.

“If you’re a Victorian driver right now, anywhere you drive in the country, you’re paying a Victorian tax. You can be driving on a NSW road beside the NSW driver and you’re paying taxes they’re not. There’s a question of fairness there.”

For businesses operating a fleet of vehicles, a state-by-state approach would create an administrative headache, he said.

“Adding more complexity to this means it’s telling private consumers, business [to] just stick with a petrol car where you don’t have this issue,” Jafari said.

But a large fall in revenue is some time off. According to the Electric Vehicle Council, electric vehicles made up 3.4 per cent of new car sales in 2021.

A spokesman for Commonwealth Attorney-General Mark Dreyfus said the case had implications for “longstanding constitutional principals” around tax and economic policy.

“The Commonwealth government would like to work with Victoria, and with the other states and territories, on policy relating to electric vehicles,” the spokesman said.

“We think that is best done through governments working co-operatively together to develop policy.”

Equity Generation Lawyers principal David Barnden, who is acting for Vanderstock and Davies, said they want the High Court to determine the tax is unconstitutional.

“Our clients, as well as the Commonwealth attorney-general, argue that the Constitution protects the federal government’s ability to implement a consistent and coherent economic policy for important issues such as Australia’s transition to electric vehicles,” he said.

Owners of electric and hydrogen vehicles must pay 2.6¢ for every kilometre driven on public roads, while plug-in hybrid owners pay 2.1¢ for each kilometre.

A Victorian government spokesperson said the user charge “ensures a fair and sustainable revenue base to fund investments in the road network”.

Those drivers also get a $100 discount on their annual registration, and buyers get a $3000 discount on low-emissions vehicles worth less than $68,740.

The tax is part of the state’s push to make those vehicles half of all new sales by 2030, and the spokesperson said the state had a $100 million package to support the electric vehicle industry and motorists that was made possible by the tax.

In its High Court submission, the Commonwealth argues Victoria’s road user charge “is a tax on goods designed to raise revenue”, and that the federal government is the only legislative authority that can impose such taxes.

The states disagree. Queensland argued in its submission it was “a direct and personal tax”, not an excise, while WA contended it was a “usage consumption tax”. Jafari said the main reason states and territories intervened on behalf of Victoria was because they could lose out.

“There will be a broader impact on states’ ability to collect excise revenue, and that’s a serious concern to a lot of states,” he said.