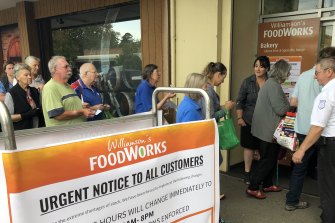 I walked the aisles of three supermarkets looking for kitty litter, milk and bread.

On Monday morning, I sat with the dog at an outside cafe in Gisborne, as is our wont, and watched an increasing volume of cars pull into the supermarket across the road. "Busy for this time of morning," I said to the dog.

It is indeed a strange thing to look at a completely empty wall of fridges where the milk should have been and see nothing. Not even soy milk. Not even almond milk. Never before had I experienced this. Yes, it’s a First World problem, I know. I laughed, for if you didn’t laugh you might cry.

Each aisle bore the marks of an invading army. The signs saying 'limit of one or two' were left dangling. A forlorn jar of gherkins sat alone, unloved even in such a time. Luckily, it was a pleasant evening for a stroll, I consoled myself, as I left one ravaged store for the other. And still the car parks were full. But there was no fighting to be seen. Perhaps all were too tired from the searching and the gathering and storing to lift a finger.

Despite Melbourne's inexorable creep towards Gisborne, it still sees itself as a country town. Three supermarkets and two dozen places to get a coffee attest to its growth, but it still feels rural. And it feels the pain of fellow towns, such as Woodend, when news comes in of its residents being under siege by out-of-towners, looking not for conviviality, but the rude expression of commerce, manifesting itself in the scouring of shelves.

Later in the week, Gisborne does something quite out of its character. It makes the news. Foodworks has instituted a shopping regime, not just of the number of items, but the type of clientele and their hours. It begins: “Urgent notice to all customers. Due to extreme shortage of stock, we have been forced to implement the following changes.” It then goes on to lay out changed shopping hours, when some may shop in preference to others. It has also hired bouncers to enforce the changes. Bouncers at a supermarket in Gisborne. Surely, these are surreal times.

Locals mutter about small buses arriving, offloading their passengers, who return to the bus laden with goods and departing, without so much as a by your leave. Here they buy and leave. The little roads are clogged, the tailback akin to peak hour in the city. Similar things are happening at Woodend, 15 minutes up the Calder Highway. Similar things are happening in Kerang, Deniliquin and Lorne.

This is not love in the time of cholera; this is the hordes and the hoarding in the time of pandemic. Take three letters out of the word and you have it.

Each morning of the past week, the car parks are near to full at opening hour. They stay full all day. Cars come and go, drivers searching for that elusive roll of toilet paper, that last packet of pasta, and even now there is no clothes-washing detergent. How often do people wash their clothes? How long do they think the contagion will confine them? The butcher next to the bouncer-guarded supermarket has put a sign on the footpath outside his shop. It reads: "Be kind."

How to be immune from this herd mentality? Scott Morrison says hoarding is "unAustralian". Nothing happens. The next day, he beseeches: "I can't be more blunt about it. Stop it." There is no cure. Market forces and fear of the unknown will trump any talk of reasonableness. Now a supermarket kid will demand of you to put back a set of pens if you are going to choose another. By god you cannot be holding two packets. Have you not read the signs? One only, and only one.

Early in the week, I joked with one young checkout girl: "Busy?" She rolled her eyes. "Mondays are usually dead," she replied. I laughed and took my mandated two bags of kitty litter.

Off I went into the twilight, in search of milk and bread.

Warwick McFadyen is a desk editor for The Age.

Related posts:
03/20/2020 Lifestyle Comments Off on ‘Each aisle bore the marks of an invading army’
Recent Posts
We and our partners use cookies on this site to improve our service, perform analytics, personalize advertising, measure advertising performance, and remember website preferences.Ok